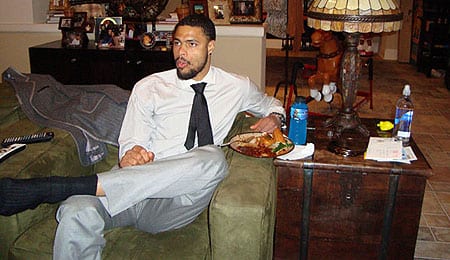 He may not find the same kind of eating in Charlotte that he did in the Big Easy, but Tyson Chandler — if healthy — can still be a defensive stalwart.

The 2009-10 RotoRob NBA Draft Kit continues to run amok with the release of yet another team preview. While we wonder when Delonte West will return this time, let’s check in on the Charlotte Bobcats, who will look to build on the best season in franchise history and finally earn their first playoff berth.

The Charlotte Bobcats are committed to instituting a running game this season in the hopes of jump starting what was the NBA’s worst offense last season. The question is, will the minor personnel changes they made this offseason be enough to affect legitimate improvement in this club? Sorry to say, but I believe the answer is no. Expecting the Bobcats to finally reach the postseason this season for the first time in franchise history is a fool’s bet. It’s not impossible – this is the Eastern Conference after all – but it’s going to take a crapload of good luck.

Emeka Okafor – the very first player the Bobcats ever selected in the draft – is gone, and in his place as part of a money-motivate deal is Tyson Chandler. Chandler is coming off an injury-plagued season that necessitated ankle surgery this summer. He’s still recovering and is also dealing with a toe woe, but should be good to go for the regular season. While Chandler isn’t capable of supplying the offense that Okafor could, he’s a tremendous defender and is a more athletic player, meaning he could fit in better with the team’s new commitment to a higher tempo pace.

Boris Diaw’s ankle is also hurting, a souvenir of his time at Eurobasket ’09. The team’s starting PF – who really stepped up his game after a mid-season deal to Charlotte – should be fine once the games start to count. At least he better be, because the four spot is a real weak area for this team, and any prolonged absence of Diaw would be disastrous to the club’s limited chances to earn a playoff berth. The club is high on rookie Derrick Brown, but he’s an unproven commodity and Alex Ajincas is buried deep in Coach Larry Brown’s doghouse right now.

Charlotte won 35 games a year ago, which, despite being a new franchise record, was not good enough to make the playoffs. Still, the Cats were in the hunt most of the season in Coach Brown’s first season at the helm, and that has to be considered progress. Now, if this club can just step up offensively, without sacrificing too much of the defensive improvements it made last season, then it might be on to something. But where is the incremental scoring going to come from?

Certainly the addition of backup Ronald “Flip” Murray will help. Expected to back up both guard positions and even play some three as well, Murray adds some much-needed offensive firepower to the Bobcats’ second unit. He’s been around the block a time or two, but can still light it up with some instant offense off the bench. The only concern here is whether Murray’s addition will cut into the PT of promising sophomore D.J. Augustin at all.

But can Coach Brown – who notoriously favours vets over youngsters – coax enough improvement out of his team to make up the difference and get this team into the playoffs? If he does, it might be the irascible coach’s finest job yet.

Felton had a pretty good season last year, but his poor shooting has led many to suggest that the Cats would have a hell of a lot more offensive prowess with Augustin running the show. Augustin, whose third year option was recently picked up, led all NBA rookies in FT shooting last season and stands to improve quite a bit this season. If Charlotte is truly interested in beefing up its offense, sending Felton to the bench — or just dealing him right out of town — in favour of Augustin may be a very good move.

Wallace is still the most desirable Bobcat to own. Since joining this team five years ago, Crash has settled into a very consistent groove. Injuries are always a concern given how hard he plays the game, but he managed to reach 70 games played for the third time last season. While he didn’t have as many touches, I like the fact that his FG percentage bounced back and he’s done a superb job the past couple of seasons becoming a much strong FT shooter.

Bell salvaged his season last year after arriving from Phoenix in a mid-season deal, but the Bobcats are already trying to get rid of him, so I’d be surprised to see him last the season in North Carolina. Bell can shoot the ball, but with Augustin in need of more PT, I can’t imagine he’ll last long in this environment – especially if Charlotte finds itself out of the race earlier than expected.

With the Bobcats re-signing Felton (although not to a long-term deal), and bringing in Murray, Augustin will slide on many Fantasy owners’ cheat sheets, but this kid lit it up when he got a chance to start last year, and he deserves to be in the team’s starting five. He’s gotten stronger and more flexible this offseason in the hopes of avoiding some of the injury issues he dealt with last year, and if – or when – Charlotte decides to divest itself of Felton, Augustin is going to be a serious Fantasy stud.

Two-guard Henderson out of Duke was the team’s top pick in June. A Michael Finley-type, Henderson brings a great mid-range game to the table, but he’s uncomfortable being “the man” on his team, which is fine for now, because he’s in a low-pressure situation. The Bobcats have enough depth in the backcourt that they won’t need to lean on Henderson. That’s a damn good thing, because he certainly failed to impress in the pre-season opener.

Second rounder Derrick Brown was plucked out of Xavier, and as I mentioned earlier, he’s got a lot of fans in the organization. Although he showed a little something-something (10 points) in the pre-season opener, Brown’s offensive game needs work, but he has tremendous potential as a defensive standout.

Antonio Anderson was invited to training camp after a strong senior season at Memphis, and while the combo guard will get a long look during the exhibition schedule, his chances of sticking with the team are slim and his chances of being Fantasy-relevant are virtually non-existent.

Can Chandler rebound from an awful season and get back to being a defensive powerhouse? Will Augustin get enough PT to be Fantasy relevant? Does Ajinca have a hope in hell of impressing Coach Brown? Can Diaw continue his studly play as a Bobcat?

By RotoRob
This entry was posted on Saturday, October 10th, 2009 at 11:09 am and is filed under 2009-10 RotoRob NBA Draft Kit, BASKETBALL, RotoRob, Team report. You can follow any responses to this entry through the RSS 2.0 feed. You can leave a response, or trackback from your own site.