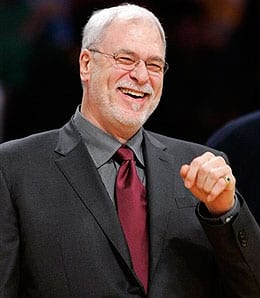 Phil Jackson may not be all smiles if Ron Artest goes berserk.

And the 2009-10 NBA Draft Kit keeps on trucking, with yet another team preview. And while the Grizzlies are still waiting to get their first look at Allen Iverson and his wonky hammy, let’s take a look at the defending NBA Champion Los Angeles Lakers.

It all came together for the Lakers in 2008-09, building off a tough NBA Finals loss to the Boston Celtics the year before. They had some hiccups during their playoff run, most notably an uninspired seven-game series with Houston, but it never really felt like they were in any serious trouble en route to the NBA championship. Yes, the Lake Show got some breaks as injuries derailed two chief rivals (San Antonio minus Manu Ginobili and Boston without Kevin Garnett) and Orlando did its part by upending LeBron James and the Cavs, but even the most ardent Laker detractors have to admit they were clearly the best team in the NBA last year.

Winning that ring had to be particularly satisfying for Kobe Bryant, who was finally able to win one without the Diesel around. Some fans may consider it validation for Bryant (as if he needed it), though such a view diminishes just how outstanding of a player Pau Gasol has become. No, he’s not the equal of Shaquille O’Neal in his prime, but he’s one of the best big men in the game and was the single biggest difference between the Bryant-led teams that couldn’t get out of Round One post-Shaq and the ones that reached consecutive NBA Finals and won a championship.

Coming off their title, the Lakers made only one significant move this offseason, replacing breakout playoff performer Trevor Ariza with the mercurial Ron Artest. On paper this looks like an upgrade, though there will always be questions surrounding Artest both on and off the court. Optimists will point to his proven scoring ability and reputation as a lockdown defender, while a more pessimistic view will focus on his questionable durability (both physically and mentally) and declining skills on the defensive end. The belief is that Bryant, Lamar Odom and Phil Jackson can keep Artest on the straight and narrow — similar to what Michael Jordan and Jackson did with Dennis Rodman — but Artest is a different kind of crazy than Rodman, which makes this a calculated gamble for the Lakers.

Beyond the Artest addition, the Lakers return the core of their championship team. Bryant is a year older and doesn’t drive to the hoop the way he once did (his free throw attempts dipped from 742 to 546 last season despite an increase in yelling “hey!”), but his mid-range game is deadly, he’s an excellent finisher and his competitiveness is second to none. The other primary cog is Gasol, who was born to play in the Triangle Offense. He’s shot over 57 per cent in 108 regular season games with the Lakers and is a nightmare for other teams to defend because he and Bryant operate so fluidly on the court together.

The Lakers also have a good group of role players led by Odom and Derek Fisher. Apart from Artest, the play of Odom may be the biggest key to LA’s ability to repeat. The walking mismatch was a beast in the postseason, but since that time he went through a bit of an ugly contract dispute with the team before re-signing and then he got married. It’ll be interesting to see if he can maintain that intensity given the events of the past few months.

With so much high-level talent on the roster, the Lakers are a lock to be in the mix for another NBA Finals appearance this season, and if the perennially overhyped and injury-prone Andrew Bynum actually elevates his game the Lakers should once again be considered the favourites.

The Lakers have no shortage of options at four of the five positions, though point guard figures to be a weakness once again. Fisher is a reliable veteran, but he looks like a turnstile against the game’s quicker point guards. Still, he can knock down open shots and won’t fold under pressure, something you can’t say about backups Farmar and Shannon Brown. I’m sure the Lakers would like to see someone step up and supplant Fisher in crunch time. However, neither of his potential backups has shown any inclination that they’re ready to do that.

Here’s a hint, he wears No. 24. Even with his production dipping across the board, Bryant still averaged 26.8 points, 5.2 rebounds and 4.9 assists per game last season. Of some concern, his three-point attempts were at their lowest level in five years, and his free-throw attempts were the lowest this decade. That tells you he’s altering his game and becoming more of a mid-range scorer, which is good for career longevity but bad for Fantasy owners as Bryant is now contributing in fewer categories. I expect another dip in minutes and production in 2009-10, though he remains an elite Fantasy shooting guard.

The easy target here would be Bynum, who has played only 85 games in the last two seasons and could be bumped down the offensive pecking order with Artest in town. However, I’ll tab Odom as my dud. His stock will almost certainly be inflated after his 12.3 points and 9.1 boards per game in the postseason, but it’s important to remember that when everyone was healthy last season, Odom was hovering around nine points and six rebounds a night. Nice production for an NBA reserve, not so good for Fantasy owners. Add to that the security of a new contract and the always excellent decision to marry a reality TV star you just met and this could be a down year for Odom.

It’s hard to classify anyone in LA as a sleeper considering how overexposed the team is. In fact, only Bryant and Gasol are true Fantasy studs, but someone will undoubtedly talk themselves into the supporting cast (Artest, Odom, Bynum) several rounds too soon. Like last year, I’m inclined to go with Farmar by default, though I wouldn’t use a draft pick on him outside of very deep leagues.

The Lakers went the Robert Sarver route and dumped their draft picks for cash. The only rookie on the roster is Chinemelu Elonu, who is a long shot to make the team in any capacity. Nothing to see here.

The ripple effect of signing Artest is the thing to watch. Does he alter his game in LA? Does he become a knockdown three-point shooter? Can he stay healthy? Will he release an R&B album? Is there a Kardashian for him? His impact on the team could affect the value of everyone on the roster with the possible exception of Gasol (and Sasha Vujacic, who has negative value no matter what Artest does). If he keeps gunning, there are fewer shots for everyone else. If he misses 20-plus games again, Odom and Walton benefit. Just one more reason for Artest’s debut season in LA to be must see TV.

By Herija Green
This entry was posted on Thursday, October 8th, 2009 at 1:02 am and is filed under 2009-10 RotoRob NBA Draft Kit, BASKETBALL, Herija Green, Team report. You can follow any responses to this entry through the RSS 2.0 feed. You can leave a response, or trackback from your own site.