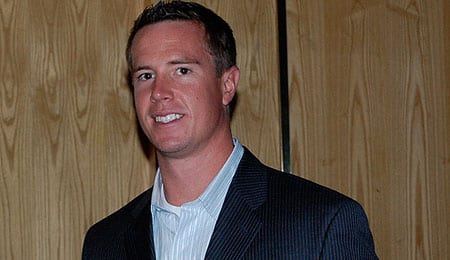 Matt Ryan looked sharp in guiding the Falcons to the playoffs as a rookie. What’s he got up his sleeve for an encore?

We’ve got more of the 2009 RotoRob NFL Draft Kit today, with the release of yet another team preview. We’re going to try to shoot out all these team previews and then start releasing the kit’s other goodies (cheat sheets, sleepers/busts lists, etc.). Don’t change that channel!

Coming off their first season without Michael Vick, little was expected again of the Falcons, especially considering they were starting a rookie quarterback in Matt Ryan. A big free agent pick up in Michael “Burner” Turner, the former backup to Ladainian Tomlinson in San Diego, boosted expectations to a possible .500 finish on the season. But the Falcons flew high and exceeded all prognostications last year, finishing with an 11-5 record and making it to the playoffs where they eventually fell to NFC Champion Arizona. Turner rushed for 1,699 yards and 17 touchdowns en route to his first Pro Bowl berth. Along the way, he set a franchise record with 220 yards in the first week of the season against Detroit. Roddy White proved to be Ryan’s go-to receiver, following up his solid 2007 campaign with an even better 2008, registering 1,382 yards receiving and seven touchdowns. Ryan, Turner, and White were the three biggest reasons the Falcons went from a minuscule four-win season in ’07 to an 11-win season in ’08.

After a surprising season saw the Falcons reach the playoffs, expectations were high to beat an Arizona Cardinals team which had won the weak NFC West with a 9-7 finish. But it was not to be, as the Cardinals were led by the playoff experience of veterans Kurt Warner and Edgerrin James and the Falcons fell in the Wild Card game. Most expected Atlanta to at least make it to the second round, so to fall short in the first round was a disappointment. A December 7th loss to the Saints, a 29-25 defeat, effectively ruined the Falcons’ chances at a division title and potential first round bye. Atlanta led in the fourth quarter 25-22, but its special teams collapsed as Pierre Thomas returned a kickoff 88 yards for the go-ahead score for the Saints which would prove to be the final scoring in the contest. Turner was held to just 61 yards rushing on 18 carries for one of his least effective games of the season. That being said, there wasn’t too much that went wrong this season for the Falcons as they shocked us all by making the playoffs and had an above average defense led by young Jamaal Anderson at defensive end and John Abraham, who recorded 16.5 sacks.

The Falcons finally released embattled quarterback Michael Vick on Thursday, effectively cutting all ties with their former “dawg.” Moving forward with NFC offensive rookie of the year Ryan at the helm, Atlanta traded for future Hall of Famer Tony Gonzalez, getting him for just a 2010 second round pick. This was a huge move, giving the Falcons a huge target with one of the best receiving tight ends of all time. With White, Ryan, Turner, and now Gonzalez, the Falcon offense looks to start the season as one of the most powerful in the NFC.

Atlanta made only one insignificant draft day trade but still had a productive two days overall, selecting seven defensive players highlighted by number 24 pick Peria Jerry, a defensive tackle out of Ole Miss. The Falcons also upgraded their secondary with a solid pick in safety William Moore, who had an outstanding career with the Maryland Terrapins and should prove to be the man in waiting behind incumbent Erik Coleman.

Year two of the Ryan regime will show whether last year was a one hit wonder or he is the real deal. But if last season was any indication of how his career will go, expect a Pro Bowl caliber season from the young quarterback. His 16 touchdown passes in 2008 will most likely increase this season with the addition of Gonzalez at tight end. Ryan showed he can lead as a rookie last season, but the next step for him is to lead the Falcons to a playoff victory and beyond.

Turner had everyone hatin’ on him last season after the Falcons gave him a big contract. His doubters said he wouldn’t be able to handle the full load after spending the early parts of his career as LT’s backup. I bet they all feel stupid now. Turner was outstanding last season, and only looks to improve on his numbers even more this season. With Jerious Norwood also in the backfield, Atlanta has a great back to spell Turner. The two rushed for over 2,400 yards combined last season and could potentially improve that this season behind a solid offensive line.

The tight end position was not utilized too much last season with the solid play of White and rookie wide receiver Harry Douglas. But with the off-season acquisition of Gonzalez, this position will be much more than just a blocker this year. Expect big things from Gonzalez at tight end, but also expect him to be an effective blocker with his big frame and strength.

The Falcons return all their key components from the 2008 squad, which was led by Abraham’s monster season. With the addition of seven defensive players via the draft, expect to see a few rookies step in right away and get solid playing time, namely Jerry at defensive tackle. The D-line is very fast and should be near the league leaders in sacks once again. The special teams return incumbent place kicker Jason Elam, one of the best all time, and back-up running back and kick returner Norwood, who has unparalleled speed. The Falcons will once again be solid on special teams.

Portland blazed past Detroit on Sunday, dropping the Pistons to 6-6 since the acquisition of point guard Allen Iverson. While the final count was 96-85, Portland held control for most of the contest as it outscored the Pistons 25-13 in the first quarter. The Detroit reserves helped cut the lead to 45-42 late in the […]

The 2008-09 RotoRob NBA Draft Kit just keeps on coming, today with Daniel putting the talented Blazers under the microscope. For a team that nearly made the playoffs last season, you would think that one or two big changes would be made in order to get over the hump in the uber competitive Western Conference. […]

We continue the 2008-09 RotoRob NBA Draft Kit with more team previews, today with Daniel checking in on his former hometown team the Seattle Sonics, er, the Oklahoma City Thunder. It pains me to even write about The Artist Formerly Known As the Seattle Supersonics, so don’t be alarmed if I only refer to the […]