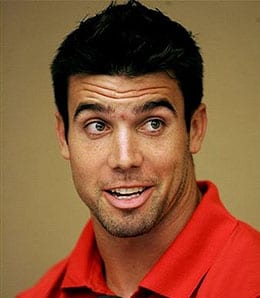 Trent Edwards ranks No. 14; who are the rest of our top 40 quarterbacks?

BY DEREK JONES and ANDY GOLDSTEIN

In order to guide you through Draft Day, the 2009 RotoRob NFL Draft Kit continues by providing you with comprehensive customizable cheat sheets for quarterbacks, running backs, and receivers.

For those of you wondering, “hey, where are the tight ends, defenses, and kickers?” my colleague Andy Goldstein taught me a few very valuable lessons:

1. Kickers don’t matter until the end of the draft.
2. Tight ends are overvalued. Once you get past Tony Gonzalez, Jason Witten and Antonio Gates, the position is a wash.
3. Defenses are wildly overrated. Trying to guess the performance of defenses on a weekly basis isn’t easy and which teams represent the league’s best constantly changes from year to year. Thus, using mid-round picks on them is useless in my opinion.

Thus, let’s start it off with an explanation on how we arrived at these numbers.

Rankings: Andy and I compiled rankings for 40 quarterbacks, 60 running backs and 80 wide receivers. Following those initial lists, we teamed up to produce a fair and perhaps somewhat shocking list of positional rankings (hint: quarterbacks usually don’t finish at the position’s top spot in Fantasy points two years in a row). Upon examining these, some may be a bit skeptical over the lack of reaction towards pre-season success from players. It’s not a true indicator for success considering it is backups versus other backups for a majority of these games.

Tier: Each position was assigned a tier number, which is used to help separate the men from the boys and the great from the good, so to speak. Ranging from 1 to 20, players with a 1 should be considered cornerstone players while those with anything in double digits should not be considered a top level player.

ADP (10-team league & 12 team league): ADP refers to average draft position, a phenomenon that tracks where players are drafted on average, in part based on their overall rank, after a series of mock drafts have been conducted utilizing specific scoring systems. For example, if you see that Randy Moss has an ADP of 2.03, it simply means that his average draft position is the second round’s third pick. The ADP component was used under standard scoring systems.

Auction: The last column measures how much money one should spend on a player under auction only rules. The prices are based on the premise that the player would be the first one selected during the draft. Interestingly enough, auction drafts allow any player to be chosen for auction at any point. In leagues such as this, teams may be given a cap to work under. In the process, their chances of building a superpower team are greatly compromised.

Also, these sheets will provide you with plenty of room to diss fellow owners, take notes on the opposition, or just simply monitor your player’s health. Overall, these sheets will get you up and running for 2009 Fantasy drafts throughout the country.

Now that we know that all the off-season wooing will not result in a consummation of this proposed marriage, the football landscape has changed dramatically in Minny.

The Buccaneers did not win the division like they did in 2007, but they did have a winning record at 9-7.

The Cardinal offense, while flawed towards the end of the regular season, ran over enemies for much of the ’08 season including the postseason.