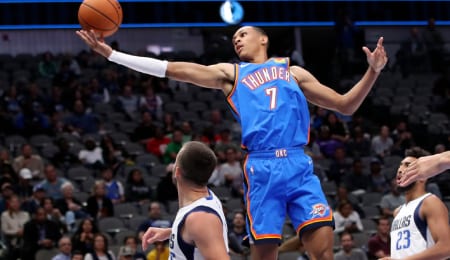 With the 2020-21 NBA season pretty much done and our final batch of Fantasy basketball waiver wire picks now published, it’s time to review the season and see which of our recommendations wound up paying off.

With this in mind, we rank players higher that were identified earlier in the season, as — in theory — they had an opportunity to provide value for your team for a longer stretch and have a greater overall impact on your Fantasy season.

Oh sure, we had plenty of misses among our picks, and because of the bi-weekly (and more recently, every three weeks) nature of our column it means that some hot free agents get scooped up days before we can tout them. But the fact is that if you managed to wind up with, say, two or three of these guys on your team, chances are you enjoyed a pretty successful season.

Darius Bazley, SF, Oklahoma City Thunder (Week One): In our season debut of the Wire Troll, which we released three days before the season started, we hit the biggest home run of the Fantasy basketball season by identifying Bazley as an up and coming star. We wrote: “he looks ready to spread his wings this season,” and oh has he ever. In becoming the full-time starter at the three for the Thunder, his bucket count rose dramatically, he did a way better job of getting to the line and his work on the glass improved hugely — especially on the defensive boards. As the season nears its conclusion, Bazley is only getting better with 18.5 PPG in April and 21.5 points and 10 boards per game in May. After managing just one double-double as a rookie, he’s already logged 11 this season. Bazley has given Thunder fans a real reason to be excited about the future, especially if his three-point shooting from practice starts showing up in games (see video below).

Keldon Johnson, SG/SF, San Antonio Spurs (Week Two): Johnson headlined our Week Two picks, as we quickly pegged him as another sophomore ready to take a big step forward. As a wing player, he’s really flashed improved passing skills, doubling his assist count this season while moving into a full-time starting role. Johnson’s PT rose dramatically in his second season, and really the only disappointment was his work from downtown. If he gets back to the kind of deep touch he showed as a rookie, he’ll take an even bigger leap in his third season. After logging just a single double-double as a rookie, Johnson already has eight, emerging as an exciting and talented player with upside.

Mason Plumlee, PF/C, Detroit Pistons (Week One): Another Week One gem, Plumlee has mostly been a streaming option for blocks throughout his career, but really found a home as the full-time starter in Detroit this season. He enjoyed the finest rebounding season of his career while averaging nearly a double-double (in fact, in March he posted 10.9 points and 10.2 boards per game). All told, Plumlee has recorded a career-best 16 double-doubles so far this season, but note that Detroit has been resting him down the stretch, so he hasn’t played since April 26. Regardless, it does not take away from the fact he’s been the best big man off the wire this season.

Saddiq Bey, SF, Detroit Pistons (Week Four): We gave Bey some love in early January, stating that the rookie was starting to show his potential at that time. He’s established himself as part of the young core that is the Pistons’ promising future and the numbers bear it out. He shot better in January, did a fantastic job from the line in February and, while his bucket count dipped a bit in March, he recovered to enjoy his finest offensive month of the season in April — despite attempting fewer three pointers. Bey’s shooting has room for improvement, but he really took off after the Pistons shut down Blake Griffin, and we’re excited to see what he’ll do as a sophomore.

Jakob Poeltl, C, San Antonio Spurs (Week Eight): Poeltl wound up being our best mid-season pick, getting recommended in early February when he stepped up with LaMarcus Aldridge out. In taking over as the starting centre, Poeltl’s game took off in February (despite not doing as well on the offensive glass), and he played even better in March despite fewer minutes before improving his offense further in April despite sinking fewer buckets from the field. All told, he enjoyed the finest season of his career, providing a nice double-double threat capable of supplying solid block totals.

Kendrick Nunn, PG/SG, Miami Heat (Week Six): At the end of January we recommended Nunn based on his improved shooting touch and the fact he had picked up his play since returning from a bout of Covid. He wound up dropping more dimes in January before really jacking up his bucket count in February and vindicating our pick. Nunn’s FT shooting dipped in March (yet was still solid) but was impeccable in April when he turned it on again. He wound up returning to the starting lineup for most of the season, seeing a boost in minutes over his rookie season, even though he didn’t sink as many buckets this season. With Tyler Herro back now, Nunn’s taking a late-season hit, but he delivered some fine value off the wire and even canned his 250th career three-pointer on Tuesday.

Bobby Portis, PF/C, Milwaukee Bucks (Week One): Portis is another gem that really panned out who we recommended prior to the season. We legitimately only expected him to have temporary value early on, but he wound up being a great addition in Milwaukee, and was really consistent month to month as a solid shooting double-double threat. And talk about efficient. Portis saw less PT this season and didn’t get to the line as much, but had a phenomenal season from outside (47 per cent accuracy on three-pointers) and sits just one back of tying his career high in double-doubles. For a bench player that only plays 21 minutes per game, the fact he wound up in the top 100 in Fantasy points is definitely impressive.

Gary Trent Jr., SG, Portland Trail Blazers/Toronto Raptors (Week Six): We pimped Trent when C.J. McCollum busted his foot and he delivered, doing a better job of getting to the line in January and then blowing up in February despite not shooting as well from beyond the arc. Trent’s touches dipped in March, but he recovered in April with improved scoring and his best rebounding work of the season. He did better work on the offensive glass with the Blazers before getting dealt to Toronto, where — given more PT — he really stepped up offensively. Trent suffered a leg contusion late last month, missing six games, but he returned on Thursday and didn’t skip a beat, pouring in 25 points for his best game in nearly a month.

George Clinton formed Parliament as part of his superb Parliament-Funkadelic collective of funk stars. In 1975, the band released its fourth album, Mothership Connection, and the second single was the infectious “Give up the Funk (Tear the Roof off the Sucker),” co-written by the brilliant Bootsy Collins.

By RotoRob
This entry was posted on Sunday, May 9th, 2021 at 11:30 am and is filed under BASKETBALL, RotoRob, The Wire Troll. You can follow any responses to this entry through the RSS 2.0 feed. Both comments and pings are currently closed.