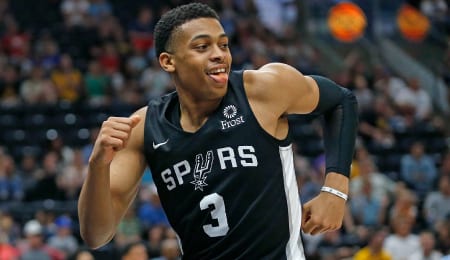 Welcome back to another week of Fantasy basketball. Well, by now your Fantasy drafts are over; it’s time to start milking that wire.

This week, Cody Zeller (broken hand) underwent surgery that will cost him 4-to-6 weeks (so keep an eye on Bismack Biyombo); James Harden (Covid-19) will be available to return Saturday; and as he promised, LeBron James shook off his ankle injury to suit up on Christmas, flirting with a triple double to boot.

And now, let’s get to this week’s Fantasy basketball recommendations…

Keldon Johnson, SG/SF, San Antonio Spurs (ESPN: 3.1 per cent; CBS: 20 per cent): The Spurs’ 2019 first round pick (29th overall) had been off the Fantasy radar until he exploded in the season opener for 16 points, five boards, three assists and three steals. He showed some promise in limited action as a rookie last season, shooting well from the line, but if he’s regularly going to get the kind of minutes he saw in the opener as the surprise starter, he’ll be Fantasy gold. Johnson is athletic, has good size as a wingman and is a strong defender. Coming out of Kentucky, his jump shot, ball handling and passing needed some work, but it’s clear he’s ready to come into his own. Not yet excited about this kid? Maybe the video below will help…

Ish Smith, PG, Washington Wizards (ESPN: 3.6 per cent; CBS: 9 per cent): It’s been over three and a half years since Smith was a Fantasy factor, but with Russell Westbrook expected to get rested in back-to-backs, he could have surprise early season value. The Wizards play Saturday and Sunday, so we’ll get to put this theory to the test right away. Wake Forest product Smith will be hard pressed to repeat the bucket count he had last season with Washington, but he’ll be worth tracking as long as it takes for Westbrook to be set free.

Eric Paschall, PF, Golden State Warriors (ESPN: 4.4 per cent; CBS: 24 per cent): Paschall is another player that’s been off the radar for most Fantasy owners, but he’s worth looking at with both Draymond Green and Alen Smailagic currently out. Paschall actually had a very fine rookie season in 2019-20, and if he can start hitting a few more shots, he could be an early-season surprise. At this point, track the kid and get ready to snatch him if he heats up.

Patrick Beverley, PG, Los Angeles Clippers (ESPN: 9.1 per cent; CBS: 27 per cent): Beverley dealt with some injury issues last season, but he’s healthy now and looked good in the opener (10 points, six boards, three assists). This dude will never carry your team, but has value as a depth piece.

Immanuel Quickley, PG, New York Knicks (ESPN: 3.1 per cent; CBS: 31 per cent): The 25th overall pick in this year’s draft suffered a hip pointer in the season debut, but not before picking up five points, a board, a dime and a steal in just 12 minutes. Quickley is day-to-day, but you’d be wise to grab him now before he starts flying off the wire. This Kentucky product will have to fight for minutes in a crowded Knick backcourt, but there’s major potential here.

Patrick Williams, SF, Chicago Bulls (ESPN: 19.8 per cent; CBS: 46 per cent): The No. 4 pick in this year’s draft wasted no time showing he’s NBA ready as he poured in 16 points with four boards, a block, a steal and a helper in his debut. If you want Williams, now’s the time to pick him up.

Aron Baynes, C, Toronto Raptors (ESPN: 23 per cent; CBS: 33 per cent): Early last season, we recommended Baynes and it was a decent call. The big man enjoyed a career year, but missed quite a bit of time with injuries. Based on his minutes in the opener, Baynes could do even better this season, as he looks like he’ll be a fairly significant part of the Toronto attack while really helping out on the glass.

Sterling Brown, SG, Houston Rockets (ESPN: unowned; CBS: unowned): The former Buck has found himself on a Houston team that is currently devastated by Covid-19, so assuming the Rockets can field a team, he’s one of the few players — and perhaps the only true backcourt player — that’s actually healthy. So at the very least, Brown is an intriguing DFS play.

Canadian singer Avril Lavigne hit the scene in 1999, and she’s still at it today. In 2002, she released her debut album Let Go, and one of the biggest singles from this effort was “Complicated.”

By RotoRob
This entry was posted on Saturday, December 26th, 2020 at 11:49 am and is filed under BASKETBALL, RotoRob, The Wire Troll. You can follow any responses to this entry through the RSS 2.0 feed. Both comments and pings are currently closed.