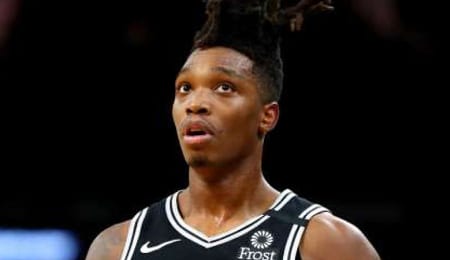 Lonnie Walker IV is thriving as a full-time starter. (WOAI)

Welcome back to another week of Fantasy basketball. We’re still awaiting for a James Harden trade that could have huge implications on your leagues, but in the meantime, how about taking a dip in the Fantasy basketball waiver wire pool?

This week, Kyrie Irving missed a couple of games because of personal reasons; Seth Curry has tested positive for Covid-19, leaving the 76ers stuck in New York; and Seattle is quite bullish that the NBA will soon return to Em City.

And now, let’s get to this week’s batch of Fantasy basketball waiver wire recommendations…

Lonnie Walker IV, SG/SF, San Antonio Spurs (ESPN: 10.7 per cent; CBS: 35 per cent): At the end of February we recommended Walker, and while he didn’t play poorly in March, he had fewer touches before the shutdown. Well, he’s taken a big step forward so far this season as the team is doing its best to find minutes for the budding wingman. On Thursday, Walker looked really good (see video below) in scoring 14 points with a season-high tying six boards, two treys, two assists and a block, and although his PT is down so far in January and he’s not shooting quite as well from downtown this season, we really like what we’re seeing here. As the Spurs’ first round pick in 2018 out of Miami, he was touted for his athleticism, good size as a two-guard, and strength. Walker’s D needed work and he wasn’t exactly NBA ready, hence it’s taken him to his third season to really find his groove.

Austin Rivers, PG/SG, New York Knicks (ESPN: 7.5 per cent; CBS: 14 per cent): Back in early March 2019, we recommended Rivers as a deep league option. He wound up seeing less action in March, but shot better from the line in April, so we got mixed results from this pick. Coming off a season high 23-point explosion on Wednesday, Rivers deserves another look because — despite the fact he’s coming off the bench exclusively so far — he’s seeing more action this season, and is really make the most of it. He’s given the Knicks another scoring option, and with their lack of backcourt depth, he’s a nice option off the wire.

Daniel Theis, PF/C, Boston Celtics (ESPN: 11.3 per cent; CBS: 26 per cent): Theis was a revelation off the wire last season, but the addition of Tristan Thompson, combined with the emergence of Robert Williams and Grant Williams has really hurt him. However, with all three of those players in quarantine for the next week, Theis will be leaned on as Boston’s frontcourt options are limited. He played a season-high 28 minutes on Wednesday, responding with 13 points, five boards and a block, so grab him while he’s getting the burn.

Semi Ojeleye, SF/PF, Boston Celtics (ESPN: 0.2 per cent; CBS: unowned): Although technically not a big, Ojeleye will also benefit from all the Boston frontcourt absences this week as the team plays small. Now in his fourth season, he seems to have finally taken a step forward, enjoying back-to-back double digit scoring efforts earlier this week. Coming exclusively off the bench so far this season, Ojeleye has seen his bucket count rise, making him a nice short term add in deeper formats.

Nicolas Batum, SG/SF/PF, Los Angeles Clippers (ESPN: 32 per cent; CBS: 50 per cent): After getting waived by the Hornets in late-November so they had cap space to sign Gordon Hayward, Batum wound up in L.A. with the Clippers, and lo and behold — he has a bigger role now; in fact, he’s been a full-time starter so far this season. Batum has scored at least 13 points in three straight games, responding to a nice uptick in PT so far in January. And to further underscore his renaissance, it’s been four years since he was this active on the glass.

Dwayne Bacon, SG, Orlando Magic (ESPN: 1.6 per cent; CBS: 8 per cent): Bacon went off for a season-high 19 points (on 8-of-14 shooting) on Wednesday, and is likely to get extra burn while Aaron Gordon (hamstring) keeps sitting one game in back-to-backs and Evan Fournier (back) is hurting. Consider Bacon a good streaming (and, of course, breakfast) option.

Saddiq Bey, SF, Detroit Pistons (ESPN: 3.4 per cent; CBS: 27 per cent): Taken 19th overall in last year’s draft, Bey is starting to show his potential, putting up career-bests of 20 points and 10 points on Wednesday. Strangely, he’s been far more accurate from outside the arc (46.3 per cent) than he has from two-point range (15 per cent). When that corrects itself, Bey’s scoring could go way up.

Shake Milton, PG/SG, Philadelphia 76ers (ESPN: 17.6 per cent; CBS: 44 per cent): Milton is sure to be one of the more popular waiver wire pickups of the week after enjoying season-bests of 24 points and seven dimes on Thursday in his first start of the season. When his three-point shooting bounces back closer to last season’s level, he definitely won’t be available on the wire.

Bismack Biyombo, C, Charlotte Horners (ESPN: 13 per cent; CBS: 38 per cent): A couple of weeks ago we mentioned that Biyombo was worth considering, and he’s lived up to the billing, recording one double-double and flirting with two others in five games this month. He’s an incredible defender, but seems to have some issues with rookie LaMelo Ball, and a rift with the future franchise player is likely a one-way ticket out of town, so keep an eye on this situation.

One of the first artists we discovered on our own musical journey, Tom Petty will always hold a special place in our memory. He got his start in 1968 and remained active until his death in 2017. In 1994, he released Wildflowers, his second solo album (without his long-time band The Heartbreakers), and the first single from this effort was “You Don’t Know How it Feels.”

By RotoRob
This entry was posted on Saturday, January 9th, 2021 at 12:30 pm and is filed under BASKETBALL, RotoRob, The Wire Troll. You can follow any responses to this entry through the RSS 2.0 feed. Both comments and pings are currently closed.