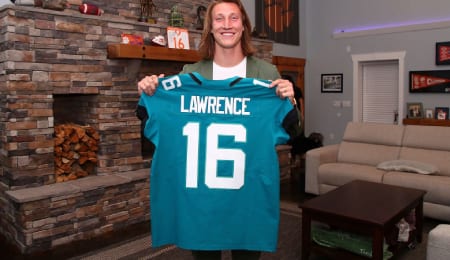 If things don’t work out in Jacksonville, at least Trevor Lawrence has access to a fireplace to burn his jersey. (Sky Sports)

No. 1 overall draft pick Trevor Lawrence (who obviously ranked atop our list of 2021 top quarterback draft prospects) enters a revamped Jaguars organization led by Head Coach Urban Meyer, Offensive Coordinator Darrell Bevell, Passing Coordinator Brian Schottenheimer and Defensive Coordinator Joe Cullen. This is a full rebuild from top to bottom and despite bookies projecting the franchise for 6.5 wins, we feel confident enough in all the moving parts to predict that this team will outperform expectations. Let’s dissect this team position by position to find out why Jacksonville will be better than most think.

In their careers as offensive coordinators, both Schottenheimer and Bevell have leaned substantially into the play action, dialing up a non-RPO, non-screen play action attempt 27 and 23 per cent of the time, respectively. The former favours rolling-or-booting out during play action to allow his quarterback to have better vision downfield and to make it easier to execute horizontal throws away from the flow of the defense. Bevell, on the other hand, likes giving his quarterbacks quick in-breaking throws off a quick drop back on a play action.

Lawrence can compliment both styles of offense since he does a great job of being able to contort his body while firing off passes on the move towards the boundary. And with his quick release, making him plant his foot into the dirt and fire on a play action will create an easy and defined read for a young quarterback. The prescribed offensive scheme is a prominent part of the Mike Shanahan-style West Coast offense. For that reason, Jacksonville is likelier to deploy 11 personnel and attack each side of the field.

Despite the positive head wind heading into the season, the Jaguars are a very new team overall. Expect Lawrence to top 3,500 passing yards, 25 passing touchdowns and 10 interception en route to becoming a fringe QB1 during his rookie campaign. Curious what he’ll look like in the NFL? Check out the video below…

The new regime saw an opportunity to pair Lawrence with ex-Clemson teammate Travis Etienne and never looked back. Jacksonville looks confident shifting to an outside zone run scheme which relies heavily on speed and getting to the boundaries. Etienne (4.38 second 40-yard dash) will be the featured back between the 20 yard lines over James Robinson (4.64 second 40-yard dash). Robinson will likely operate as the goal line and short yardage runner if he is not traded before the season.

Despite the upgrade at offense, Jacksonville still forecasts negative game script because of its leaky defense (although there’s great potential for improvement in its D — see below), and that casts a shadow over the backfield. The backfield tandem is an eerie replica of New England’s 2018 combo of Sony Michel and James White. Expect both Etienne and Robinson to maintain a low RB2 floor with Etienne holding the PPR advantage.

The acquisition of Marvin Jones and Phillip Dorsett signaled an urgent need for long speed, especially for what is shaping up to be a Shanahan-style offense. The newcomers will fit into the coveted backside Y-receiver position and Jones in particular is intriguing, as he and Bevell had prior success in Detroit. We expect Jones to be a fringe WR1 and produce a line of 70 receptions on 90+ targets, 900+ yards and seven touchdowns, although some believe he could be capable of putting up 1,000 yards.

The X-receiver will be filled by odd-man-out D.J. Chark, who aptly should draw comparisons to Kenny Golladay. Given Jacksonville’s plethora of receiving threats, Chark is likely to get knocked down to third or fourth in target share. Despite that, he’s talented enough to churn out low-end WR2 value in a boom-or-bust way. We expect Chark to produce a line of 50 receptions on 80+ targets, 800+ yards and four touchdowns.

Laviska Shenault Jr. will likely compliment the strong side of the formation and be the go-to for screen passes, like Danny Amendola in Detroit. Expect Shenault to put up 40 receptions on 60+ targets, for 400+ yards. If the offense optimizes, Jacksonville has the potential to generate three receivers with over 90 targets.

In a trade with Carolina, Jacksonville acquired Chris Manhertz, a 6’6″, 255-pound tight end with limited receiving attributes. In the draft, the organization also went out and got Luke Farrell, who coincidentally has a very similar frame (6’6″, 251). This move has Schottenheimer’s fingerprints all over it as the run-happy OC from Seattle is looking to run a lot of 11 personnel and supplement the offensive line with a pure blocking tight end. As far as production goes, this will be a Fantasy dead zone — regardless of whether the now-TE Tim Tebow signs or not.

There is tremendous under-the-radar potential for this defensive squad, which could feature up to four new starters. Cullen confirmed the front will resemble a modern 3-4 alignment (but he also plans to do 4-3 sets), a scheme that benefits the front seven immensely. The defense is likely to operate in a hybrid nickel defense like Kansas City’s or New England’s bend-don’t-break units. Under Cullen, Jacksonville has a path to the most improved defense in the league.

American saxophonist Tom Scott has enjoyed a lengthy career, getting his start in 1965 and still blowing his horn today. In 1977, he released a jazz fusion album, Blow It Out, which included the tune “Dream Lady,” later sampled by hip hop band Reminisce the Artist on its track “2NGHT.”

By Lucas Chan
This entry was posted on Thursday, May 13th, 2021 at 7:34 pm and is filed under FOOTBALL, Lucas Chan, Team report. You can follow any responses to this entry through the RSS 2.0 feed. Both comments and pings are currently closed.