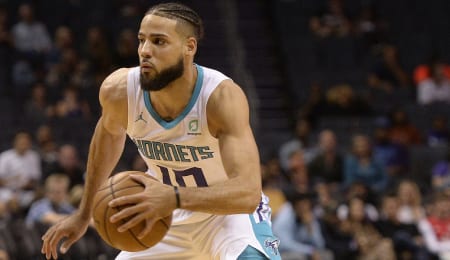 Welcome back to another season of Fantasy basketball! As always, we strive to offer up options that are actually available on your wire (owned in a maximum of 50 per cent of ESPN and CBS leagues).

This week, Houston has stepped up its James Harden trade discussions; the NBA is looking into the Clippers’ recruitment of Kawhi Leonard last year; and Ryan Smith has been approved as the new owner of the Utah Jazz.

And now, let’s get to our first batch of Fantasy basketball waiver wire picks of the season…

Caleb Martin, SF, Charlotte Hornets (ESPN: 0.1 per cent; CBS: 1 per cent): In mid-March, we recommended Martin as he was scorching (see video below). Unfortunately, the season was stalled, and the Hornets were not invited back for bubble play. However, we like him as a solid bench option this season, especially early on with Gordon Hayward (finger) dealing with yet another injury. Martin is an excellent free throw shooter, and the fact he’s shown more aptitude to get to the line with his aggressive play, and has been shooting better from the field in preseason are good signs. His ceiling isn’t high, so he’s likely best employed in deep formats, but he’s athletic, is decently size for a wing player and has speed.

Talen Horton-Tucker, SG/SF, Los Angeles Lakers (ESPN: 9.7 per cent; CBS: unowned): Here’s a dude that has yet to make a ripple in Fantasy circles, but seems poised to take a massive step forward this season. Just 20, Horton-Tucker has tongues wagging this preseason, landing him on many a list of breakout candidates. The Lakers need to find a way to get this kid into the lineup for more minutes, but that won’t be easy given how deep this team is. Be patient here, folks.

Mason Plumlee, PF/C, Detroit Pistons (ESPN: 38.4 per cent; CBS: 6 per cent): It’s been over two years since we last recommended Plumlee, and while he had his uses at times in 2018-19, last season he played less than ever despite shooting the ball very well. Now he finds himself the starter on the rebuilding Pistons after just signing with the team at the beginning of the month.

Deni Avdija, SF, Washington Wizards (ESPN: 23.8 per cent; CBS: unowned): This rookie has already shown tremendous confidence in his first taste of NBA action. The team has noticed, with Coach Scott Brooks suggesting Avdija is the front runner to be the starter. Looking for a darkhorse Rookie of the Year candidate? Here’s your man.

Jerome Robinson, SG, Washington Wizards (ESPN: 0.1 per cent; CBS: 1 per cent): Bradley Beal (back) is hurting again, and while it sounds very minor, he also missed significant time last season. Should this trend continue, Robinson could find himself quite useful. Last season, he struggled with his shooting with the Clippers but after landing in Washington as part of a three-team deal, he turned it around. Robinson got more of a chance to start with the Wizards, and given the extra PT, he responded. He’s armed with a great jump shot and is a solid ball handler, so there’s definite potential here for the No. 13 pick in the 2018 draft.

Donte DiVincenzo, SG/PG, Milwaukee Bucks (ESPN: 46.5 per cent; CBS: 33 per cent): Milwaukee’s 2018 first rounder made great progress last season, and now looks likely to be the full-time starting two-guard in 2020-21. If his PT keeps rising and his shot keeps improving, the defensively gifted DiVincenzo could be a top 70 player this season.

Darius Bazley, SF, Oklahoma City Thunder (ESPN: 4.4 per cent; CBS: 3 per cent): Bazley enjoyed a solid rookie effort and, as the expected starter, he looks ready to really spread his wings this season. With backup Trevor Ariza having yet to show up to camp, the Thunder will lean even more on Bazley at the outset of the season. If Bazley can approach the type of performances he flashed in the bubble at the end of the season, he has a chance to a real steal.

Bobby Portis, PF/C, Milwaukee Bucks (ESPN: 3.5 per cent; CBS: 30 per cent): Giannis Antetokounmpo (back) is hurting, and we’re sure it’s nothing, but Portis is a player that would stand to benefit if the Greek Freak missed any time. Portis’ role was reduced with the Knicks last season, but his stretch with Washington at the end of 2018-19 proved he’s capable when given minutes. If he stays healthy, he could be worth watching.

Killian Hayes, PG, Detroit Pistons (ESPN: 24.2 per cent; CBS: unowned): There will be a learning curve for the No. 7 overall pick in the draft, but Hayes could force his way into the Rookie of the Year discussion.

Sekou Doumbouya, SF/PF, Detroit Pistons (ESPN: 1.0 per cent; CBS: 10 per cent): There’s plenty of fascinating Fantasy fodder in Motown this season, including the 15th overall pick in last year’s draft. Doumbouya benefited from Blake Griffin‘s injury last season, but if he can improve his shooting this season, he’ll stick as a key rotation piece.

Reggae star Peter Tosh was active from 1961 until his death in 1987. Here’s the title track from his 1976 debut album Legalize It, which remains his signature piece.

By RotoRob
This entry was posted on Saturday, December 19th, 2020 at 12:34 pm and is filed under BASKETBALL, RotoRob, The Wire Troll. You can follow any responses to this entry through the RSS 2.0 feed. Both comments and pings are currently closed.