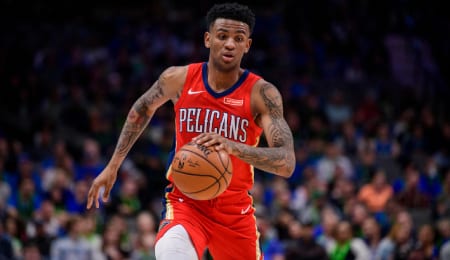 Welcome back to another week of Fantasy basketball. We’re about a fifth of the way through the season, so there’s still tons of time for you to leverage the wire to make your move.

This week, Cleveland will reportedly send troubled 2019 first round pick Kevin Porter Jr. to Houston for a future top 55 pick; Draymond Green was ejected on Thursday in an episode that officials admit was a mistake; and Anthony Davis criticized his own play despite the fact the Lakers keep rolling and have yet to lose on the road.

Without further ado, here are our…

Nickeil Alexander-Walker, SG, New Orleans Pelicans (ESPN: 16.4 per cent; CBS: 33 per cent): Alexander-Walker is a fairly new name for Fantasy owners, but after exploding for 37 points a week and a half ago, he’s on the radar now. He’s cooled since then, but still managed to provide double-digit scoring in limited minutes off the bench on Thursday while leading the team in +/-. While Alexander-Walker was seeing heavier minutes earlier in the week, and he’ll certainly be a more attractive pickup if that continues, his development has us intrigued — especially if he can improve his three-point shooting (considering he’s hoisting nearly four treys per game). Brooklyn’s 2019 first round pick came out of college as an athletic, good-sized prospect that played solid D (as long as you keep him away from Donovan Mitchell — see video below), but he needed to add strength, lacked leadership skills and didn’t have the greatest potential, so consider his ceiling limited.

Gary Trent Jr., SG, Portland Trail Blazers (ESPN: 7.4 per cent; CBS: 31 per cent): With C.J. McCollum (broken foot) out at least four weeks Trent Jr. is someone you need to add to your team. Another player that has yet to really work his way onto the Fantasy radar, Trent’s offensive contributions have been inconsistent recently, but in scoring 18 points last Saturday, he showed what he’s capable of. Even though he’s been used exclusively off the bench so far this season, he’s been doing a better job of getting to the line. Trent has a golden opportunity to step up as Portland’s third scoring option if he can just bring it on a more regular basis.

Doug McDermott, SF/PF, Indiana Pacers (ESPN: 12.4 per cent; CBS: 22 per cent): It’s been over four years since McDermott last piqued our interest, and that pick turned out well as he racked up the treys in January 2017 and shot even better from downtown in February before an inconsistent final few weeks after getting dealt to OKC. He’s bounced around since then, but seems to have found a home in Indy, and looks great right now with Myles Turner out. McDermott has scored at least 16 points in three straight games, adding eight boards on Wednesday. He’s seeing more action than ever, and over his last 10 games, he can’t miss (58.9 per cent shooting, leading to nearly 14 points per contest). McBuckets has become extremely important to the Pacers while Turner is out, so needs to be plucked off the wire.

Delon Wright, PG/SG, Detroit Pistons (ESPN: 46.7 per cent; CBS: 39 per cent): Wright is another player we haven’t recommended in a couple of years who is now benefiting from injuries. With Killian Hayes out, Wright has taken over as Detroit’s starting point guard and has supplied some decent across-the-board production. Last Saturday, Wright flirted with a double-double, and while his bucket count has waned over the last couple of seasons, he’s worth a look now. Okay, there’s a reason he’s seen mostly backup duty over his career, but if you need help at PG, he could prove a useful addition.

Kendrick Nunn, PG/SG, Miami Heat (ESPN: 29.3 per cent; CBS: 15 per cent): A Wire Troll All-Star last year, Nunn enjoyed such a fine rookie season that he believes he should have won NBA Rookie of the Year. Hey, you gotta love that kind of confidence. Nunn missed a couple of weeks on the Covid protocol list earlier this month, but he’s looking better and better since returning, scoring seven, 18 and then 28 points over his last three games. He’s lost his starting job this season to Tyler Herro, but has significantly improved his shooting touch.

After his Islamic phase, Cat Stevens returned to secular music in 2006. Way before then, however, he released his third album, Mona Bone Jakon, in 1970. The album had a darker feel than his first two records, and featured “Lady D’Arbanville,” a madrigal-inspired ballad that reached No.8 on the British charts.

By RotoRob
This entry was posted on Saturday, January 23rd, 2021 at 12:13 pm and is filed under BASKETBALL, RotoRob, The Wire Troll. You can follow any responses to this entry through the RSS 2.0 feed. Both comments and pings are currently closed.