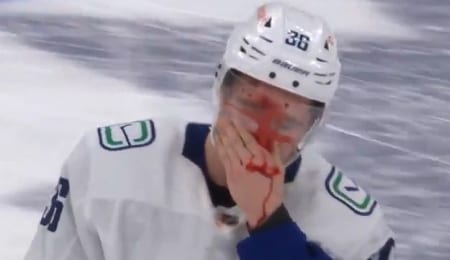 Nils Hoglander has given the Canucks his blood and sweat this season. (TMZ)

Welcome back to another week of Fantasy hockey. This will be our final batch of Fantasy hockey waiver wire recommendations for the 2020-21 season, and we hope that some of our picks have helped you to a title or two! To wrap things up for the season, we’ve provided a few names below that can help you in your championship week, including several youngsters that will command much more Fantasy attention next season so are good names to tuck away.

This week, the Rangers went ballistic (earning a $250,000 fine in the process) over the NHL’s treatment of Tom Wilson‘s latest transgression which knocked Artemi Panarin out for the rest of the season, and then the team took matters into their own hands with six fights in the first period alone on Wednesday.

Nils Hoglander, LW, Vancouver Canucks (ESPN: 6.6 per cent; CBS: 33 per cent): We recommended Hoglander back in mid-January, wondering if he was becoming the next Canuck star rookie. Well, he enjoyed a solid January (six points in 11 games), cooled in February when he failed to find the back of the net, but came up big in March with four goals. Hoglander remained solid last month and is really flying now, earning extra PT with Jake Virtanen on leave dealing with some serious allegations. Hoglander has piled up four points in the last three games, including a nifty goal off a sweet move just 31 seconds into the game on Thursday (see video below). As a rookie, he’s put up some impressive supporting numbers with a 50.34 CF percentage and an HDCF percentage of 51. Hoglander is not a big winger, but he makes up for that with some serious skill and a willingness to play a gritty game. Pro tip: now’s a great time to load up on Canucks as they play a crazy schedule down the stretch to make up for their Covid shutdown.

Michael Houser, G, Buffalo Sabres (ESPN: 1.3 per cent; CBS: 1 per cent): Houser, a 28-year-old rookie, looked very impressive in winning his NHL debut on Monday and then followed that up with another strong effort on Tuesday. His third game didn’t go very well, but with Linus Ullmark ruled out with an LBI, Houser will make his fourth straight start for Buffalo in the season finale on Saturday. Houser was a completely irrelevant ECHL goalie last season, and now he’s earning NHL wins. What a story!

Brandon Carlo, D, Boston Bruins (ESPN: 1.4 per cent; CBS: 3 per cent): It’s been about two and a half years since we last pimped Carlo, and that was a good pick as he enjoyed a better season in 2018-19 before putting up a career season last campaign. This season, he’s been dealing with plenty of injury issues but just returned this week after missing over a month with an oblique woe. Carlo drilled three shots in his first game, and then a team-high five blasts on Thursday, scoring once and going +2. When he’s healthy, he’s a key part of a championship calibre team.

Brandon Carlo’s revenge tour will take place in the playoffs. B’s are winning the cup. Blame the caps for lighting the fire 🤷‍♂️

Anthony Beauvillier, LW, New York Islanders (ESPN: 40.6 per cent; CBS: 41 per cent): It’s now been over three years since we last gave Beauvillier some Fantasy love, and he wound up finishing that season strong with a career best 21 goals. Well, he regressed in 2018-19 before bouncing back last season and even more so this season as he would easily break his personal best in goals if this had been a full campaign. Beauvillier has been a key part of a superb line for the Isles (with Brock Nelson and Josh Bailey); the trio has 18 goals for with just seven against at 5-on-5 — the third best differential out of 29 lines that have played at least 200 minutes together. The highly skilled Beauvillier is finishing red hot, currently riding a five game point streak (5-1-6).

Josef Korenar, G, San Jose Sharks (ESPN: 3.2 per cent; CBS: 1 per cent): With a pair of very strong outings over the past couple of weeks, Korenar has moved up the depth chart and the 22-year-old rookie is now the likely favourite to be the backup in San Jose next season.

Conor Timmins, D, Colorado Avalanche (ESPN: 0.2 per cent; CBS: 3 per cent): Timmins has been gaining in confidence recently, playing on the second pairing with Samuel Girard out. In a three-game stretch starting last weekend, Timmons logged three assists and went +6. Just what the Avalanche needs: another up and coming blueliner.

Patrick Marleau, C, San Jose Sharks (ESPN: 1.2 per cent; CBS: 1 per cent): All the recent attention Marleau has received has been because he broke Gordie Howe‘s career games played record, and it’s great to see other teams lauding him (Joe Thornton even gave his ex-teammate a striptease). But of greater Fantasy significance, with Logan Couture probably done for the season, Marleau could have some extra value down the stretch.

Yegor Sharangovich, C, New Jersey Devils (ESPN: 12.9 per cent; CBS: 21 per cent): Before getting shut out on Thursday, Sharangovich had been putting the finishing touches on a great rookie season, scoring four goals with an assist over the previous four games. He’s got a 51.19 CF% on a crappy team, and that bodes well for his future prospects. The Devils have a very nice collection of young players, so look out for this team going forward.

French disco drummer Marc Cerrone (who simply goes by Cerrone) has been at it since 1972. In 1978, he released Supernature (Cerone III), which featured perhaps his most famous track, “Give Me Love.” We think you’ll find that the video is definitely titillating. You’ll have to prove you’re of age and watch it on YouTube, but it’s worth it. Just don’t watch it around the kids.

By RotoRob
This entry was posted on Saturday, May 8th, 2021 at 10:50 am and is filed under HOCKEY, RotoRob, The Wire Troll. You can follow any responses to this entry through the RSS 2.0 feed. Both comments and pings are currently closed.