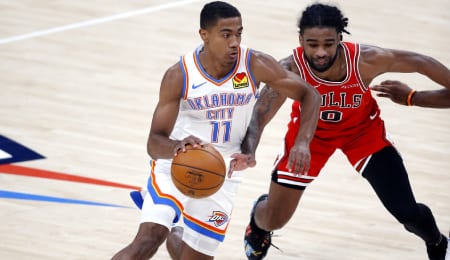 Contact tracing issues have been the only thing to slow down OKC’s Theo Maledon right now. (Sarah Phipps/The Oklahoman)

Welcome back to another week of Fantasy basketball. We’re into February and nearing the one-third mark of this truncated season, so ensure you use very opportunity to improve your team through the wire.

This week, LeBron James made his feelings known about the fact the NBA is pushing forward with plans for an All-Star Game; Christian Wood‘s All-Star-worthy season could be on hold for a while as he needs an MRI for an ankle that’s hurt again; and on the court, King James continued to make history, passing Wilt Chamberlain for third place in all-time field goals made.

Theo Maledon, PG, Oklahoma City Thunder (ESPN: 3.2 per cent; CBS: 23 per cent): This week, we’ve got several players that are new to the Fantasy landscape, headlined by Maledon, who has been thrust into a starting role with George Hill out four weeks after thumb surgery. The Thunder backcourt is decimated, leaving Maledon as a great pickup and fantastic DFS play. He had his three-game double-digit scoring streak snapped on Wednesday, thanks to a cold shooting touch, yet still found a way to contribute in other areas (six steals, four assists, three boards and a block). Rest assured, Maledon’s off shooting night was an outlier; just over a week ago his prowess from downtown earned him a place in the OKC record books (see video below). He’s emerging as one of the more pleasant surprises among this season’s rookie class, especially since moving into the starting five. This combo guard is known for his smooth play, and right now, you’d be making a smooth move to grab him off the wire. Do note, however, that Maledon missed Friday’s game because of the league’s health and safety protocols, but we still like this 19-year-old going forward.

Juan Toscano-Anderson, SF, Golden State Warriors (ESPN: 0.2 per cent; CBS: unowned): Kevon Looney and James Wiseman are both out, so the Warriors were forced to go small, thereby giving Toscano-Anderson an opportunity to get back in the rotation. Toscano-Anderson is seeing heavy minutes, and he’s producing, making him a great pickup in deep leagues and a nice play in DFS after scoring at least 14 points in back-to-back games, adding eight boards, five assists and two blocks on Thursday. Ride this productivity while you can.

Royce O’Neale, SF/PF, Utah Jazz (ESPN: 35.6 per cent; CBS: 38 per cent): O’Neale was limited by foul trouble on Friday, yet still flirted with double digit points, after recording a double-double earlier in the week and just missing another last weekend. Employed as a full-time starter this season, he’s been seeing his most action ever, and his shooting touch has bounced back after he struggled last season. As a top 35 small forward, O’Neale deserves a spot on your team.

Rodney Hood, SG/SF, Portland Trail Blazers (ESPN: 2.0 per cent; CBS: 10 per cent): It’s been over four years since we mentioned Hood at all, and even then it was only because he was hurt. Now, however, he’s getting a chance to start in Portland with both Nassir Little and Derrick Jones out and he’s been taking advantage of the opportunity to put up points and help facilitate the offense. With back-to-back games in which he’s played at least 34 minutes and scored at least 15 points, Hood is suddenly worthy of a little Fantasy attention for the first time in a while, so give him a look in deeper formats.

Derrick Favors, PF/C, Utah Jazz (ESPN: 15.4 per cent; CBS: 28 per cent): Favors is another veteran we’ve ignored for years, and last discussed only because his injury opened an opportunity for someone else. However, when you look at the recent numbers he’s been putting up in very limited minutes, it’s very impressive. On Thursday, he got to the line six times, flirted with a double-double and had three combined blocks and steals — all in just 18 minutes! Favors was rewarded with a bit more PT on Friday (21 minutes), again getting close to a double-double while adding three assists, three blocks and two steals. He does all those little things really well, and even if he’s incapable of handling a bigger load, he has a place on a very deep team. But if Favors’ PT does rise, check out his per 36 numbers for an idea of how productive he’d be.

Jakob Poeltl, C, San Antonio Spurs (ESPN: 12 per cent; CBS: 22 per cent): It’s been just over two years since we last recommended Poeltl, but he’s stepping up as a DFS option with LaMarcus Aldridge out right now. On Wednesday, Poeltl scored 19 points with eight boards, four blocks and a steal in 34 minutes and has been seen more touches overall this season. There’s a reason why the Spurs in November gave the RFA a three-year deal worth almost $27 million to stick around San Antonio.

American singer Tom Petty was the lead vocalist and guitarist for The Heartbreakers, but also released some solo projects, like Wildflowers, his first album with Warner Bros. From this effort comes “A Higher Place,” the album’s fourth single, which reached No. 12 on the Mainstream Rock chart.

By RotoRob
This entry was posted on Saturday, February 6th, 2021 at 12:34 pm and is filed under BASKETBALL, RotoRob, The Wire Troll. You can follow any responses to this entry through the RSS 2.0 feed. Both comments and pings are currently closed.