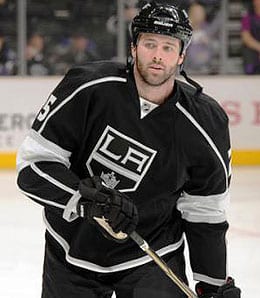 A full season with talented linemates should help Dustin Penner bounce back.

If you can get Pavel Datsyuk and Henrik Zetterberg somehow, surely that would be nice. After Alex Ovechkin and Daniel Sedin (yes, he is a LW), numbers do drop off some, but there are a few depth grabs you can make that are further down our list. Again, keep this in mind as you make your picks. Historically, left wing really drops off after the top four or five anyway. So while you wonder how new Flyer Wayne Simmonds gets involved in a new controversy seemingly, let’s take a look at the top 33 left wingers in Fantasy hockey.

1. Daniel Sedin, Vancouver Canucks (7): Many believe that Sedin was robbed of the Hart Trophy last season. After exploding for his finest NHL season in 2010-11, Sedin should be among the top three forwards off the board in this season’s drafts. He’s been +30 or better two seasons running and his knack for huge goals is only growing. Oh, and playing alongside Ryan Kesler with twin brother Henrik between them gives Daniel a spot on probably the best line in the NHL.

2. Alex Ovechkin, Washington Capitals (1): The key cog in a potent Washington attack, Ovechkin could easily be No. 1 on this list; in fact, we wouldn’t take issue if you plucked OV first overall on draft day. Okay, so he’s coming off his worst season. Yet he still managed 85 points for the sixth straight season and you have to believe with his drive, Ovechkin is determined to prove last season was a fluke. The fact that the Caps are playing musical chairs with the RW on OV’s line in training camp shouldn’t dampen his chances of bouncing back big time.

4. Ilya Kovalchuk, New Jersey Devils (2): Kovalchuk slumped in late-March at a time when the Devils, shockingly, had actually pulled themselves back into the playoff race. Overall, it was a rough season for Kovalchuk, but as the Devils’ power play almost certainly has to be better this season, his numbers should rebound. He still managed to reach 60 points for the eighth straight time, as with the Devils supposedly going to a more up-temp style this season, Kovalchuk’s reduced shot total should bounce back, bringing his point total along for the ride. The fact that he exploded for a goal and two assists on Friday was a very nice sign.

5. Bobby Ryan, Anaheim Ducks (14 at RW): A key component of one of the league’s most dynamic lines, Ryan is viewed by some as one of the most logical players to carry the mantle as the best U.S. born player now that Mike Modano has hung ‘em up. He certainly just keeps getting better, last season putting up a +15 and increasing his shot total. His PP totals were disappointing, however; but that only means there’s even more room for growth. Ryan has definitely shown a penchant for scoring clutch goals, and at the still tender age of 24, it’s reasonable to wonder if this will be his first 40-goal campaign.

6. Henrik Zetterberg, Detroit Red Wings (5): When we ranked Zetterberg in the top five last year, we predicted he would finally stay healthy. Ka-ching! The Swede reached 80 games for the first time in his career and responded with his second 80-point effort. Hell, he even reached 40 PM for the first time! The 2008 Conn Smythe Trophy winner was a beast on the PP, netting 10 goals and tying his personal best with 20 helpers on the man advantage. All told it was a fine season considering the Wings’ alternate captain saw his least amount of ice time since 2005-06.

8. Thomas Vanek, Buffalo Sabres (12): For the first time in three seasons, Vanek stayed healthy enough to play 80 games and he responded with his finest campaign since his sophomore effort in 2006-07. For the fifth straight season, he potted at least five game-winners, while tying his career best with 41 assists.

9. Dustin Penner, Los Angeles Kings (NR): Playing alongside Anze Kopitar and Justin Williams for a full season should do wonders for Penner, who worked out like a fiend this offseason. He needed to work hard after enduring one of his worst seasons ever, mustering just 45 points. But hey, at least he scored his first career short-handed goal. Penner has a chance to be a serious comeback player in 2011-12 given the quality of players on his line, so don’t sleep on him.

10. Milan Lucic, Boston Bruins (21): Part of one of the most complete lines in the league with Nathan Horton and David Krejci, Lucic exploded for his first 30-goal campaign last season, thanks in no small part to a much bigger role on the Boston PP. His ice time was up substantially and as this line – which was put together early last season – continues to gel, we may yet see further production from Lucic.

13. Mike Cammalleri, Montreal Canadiens (4): When we ranked Cammalleri in the top five at this position a year ago, we stated that it was possible he could top 90 points. Well, despite owning of the NHL’s best snap shots, Cammalleri once again was a bust in Montreal, missing time for the second straight season and failing to reach the 20-goal mark. He’s still a sniper, and the two-goal outbust he enjoyed Saturday is evidence of that, so if he can avoid injury, Cammalleri has a chance to be a steal this season.

14. Patrik Elias, New Jersey Devils (8): A top 10 LW a year ago, Elias is a player we suggested typically bounced back after down seasons. Well, he did…sort of. Hey, at least he stayed healthy last season, but was unable to come close to his 2008-09 output. Still, Elias managed 20 points on a horrid power play, so that number is almost certain to rise this season. He’s getting long in the tooth and has been an integral part of the Devils forever, but Elias could still have at least one more big season in him, and with Travis Zajac out to start the season, the Devils will need better production from their veteran.

15. Scott Hartnell, Philadelphia Flyers (23): When the Flyers went into the tank late last season, Hartnell was one of many players that disappeared down the stretch. Now, he’s dealing with an elevated heart rate that’s going to send him to the cardiologist on Tuesday, so keep an eye on how this pans out before committing to Hartnell for your Fantasy roster. He’s been very durable since coming to Philly, so hopefully this isn’t anything to worry about. The 29-year-old Hartnell picked up his goal scoring last season, but fell short of his third straight 30-assist season, and was unable to muster much on a rather ineffective Philadelphia power play.

16. Andrew Ladd, Winnipeg Jets (NR): Ladd’s fine rebound in Atlanta earned him consideration as the 2010 RotoRob NHL Fantasy Comeback Player of the Year. The captain of the Jets enjoyed his second 30-assist season in 2010-11, and while the -10 hurt, what did you expect considering he was on a crappy team? Ladd matched his career high in shots and this season he’ll be paired across from RW Blake Wheeler, who really came alive after landing in Atlanta last season.

17. Gabriel Landeskog, Colorado Avalanche (NR): Our second-ranked rookie, who won’t be 19 until November, was considered the top prospect in the OHL last season after piling up 36 goals and 30 assists in 53 games for the Kitchener Rangers. The Swedish youngster’s game is well suited for North American style hockey and he has a chance to be a good young player – very quickly.

18. Ryane Clowe, San Jose Sharks (16): When we ranked Clowe a tad higher last year, we said he’d need to score more on the PP to take the next step. Well, he couldn’t touch the 11 PPG he put up in 2008-09 but his five tallies with the man advantage last season was an improvement over the mere two he scored in 2009-10. A couple of minor injuries limited Clowe to 75 games, yet he still set a new career high in goals. Unfortunately, after surging to 131 PM two seasons ago, Clowe dropped back to 100 last season. He’ll play with budding star Logan Couture and, Martin Havlat — once healthy – will join them to form a potentially very potent threesome.

19. Alex Burrows, Vancouver Canucks (20): We ranked Burrows 20th last season, suggesting he’d experience a slight drop in production. Err…make that a significant drop. The other dude on the Sedin line missed the first 10 games of season while recovering from shoulder surgery, and his numbers took a nosedive after enjoying a career season in 2009-10. Burrows only mustered one lousy point on the PP all season long and managed to get plenty of people to detest him along the way. Target Burrows around the eighth round.

20. Simon Gagne, Los Angeles Kings (11): We hoped you listened to us last year when we pegged Gagne as a bust. For the second straight season he only managed 40 points as once again the brittle one was felled by a long-term injury, this time a neck woe that cost him nearly a quarter of the schedule. Gagne has never been one to get many PM, but last season’s total was low even for him. While he did raise his shooting percentage a tad, it was still below career norms, and Gagne only mustered 15 points on the PP. He was one of the key additions on offense for the Kings (Mike Richards being the real big one) as the Kings hope a couple of ex-Flyers are able to help jump start their attack. The key for Gagne, as always, will be health. Can he play even 70 games? If so, he can do some damage and perhaps flirt with another 30-goal season.

By RotoRob
This entry was posted on Tuesday, September 27th, 2011 at 1:03 pm and is filed under 2011-12 RotoRob NHL Draft Kit, Cheat sheets, Chris Wassel, HOCKEY, RotoRob. You can follow any responses to this entry through the RSS 2.0 feed. Both comments and pings are currently closed.