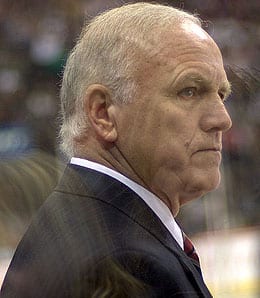 The Devils’ recovery under Jacques Lemaire has been impressive, but will fall short.

The New Jersey Devils have been the NHL’s hottest team for so long now, almost any hiccup seems to qualify as a slump.

After getting dumped 4-1 in Boston on Tuesday, the Devils have now dropped three of their last four, thereby pretty much burning any chance they had of squeaking into the playoffs and pulling off one the most amazing comebacks in league history. Sitting nine points back of eighth place Buffalo (plus with three other teams to pass) with nine games to play, after their nightmare start to the season the Devils’ valiant run over the past couple of months looks like it will be in vain.

New Jersey certainly got off to a quick start against the Bruins, outshooting them 14-1 in the first half of the opening period, and earning a 1-0 lead on Ilya Kovalchuk’s first goal in four games, a power play effort. The Devils’ ridiculously overpaid left winger enjoyed a big February, averaging over a point per game, and had gotten off to a great start in March (five goals and three assists over the first seven games). But then came his mini drought, a slump that was mirrored by the Devils at the worst possible juncture of the season. I mean, let’s get real. Back in December, who among us ever anticipated the Devils being within shouting distance of a playoff spot in late-March?

The Devils have two more games on their current road trip; next up, a stop on Pittsburgh, which has been playing much better lately. And then the big game Saturday in Buffalo, where a loss will all but end any dream of playoffs in the Swamp this season. Kovalchuk, just three goals shy of his eighth straight 30-goal season, will need to get back to earning his hefty paycheque this week if the Devils have any shot at all.

It’s been one hell of a run by Jersey (23-3-2 over the 28 games before this recent four-game spurt), but the mountain is simply too gargantuan to ascend.

The Bruins took over the last portion of the first and were all over the Devils in the second period, yet it was just 2-1 for Beantown heading into the third.

The difference for New Jersey Tuesday was its lack of discipline. The Devils didn’t live up to their moniker in either of the past two games, recording just one minor penalty in total, but they got nailed for five penalties in the first two periods against Boston, resulting in one PPG against, Zdeno Chara’s tally midway through the second, which turned out to be the game-winning goal.

Even giving a struggling power play like Boston’s that many chances is going to come back and bite you in the ass.

Another Devil left winger that has been rolling (relatively speaking) lately is Brian Rolston. Just before Christmas, we thought Rolston might emerge with value after the Devils put him on waivers. Well, Rolston’s long-time coach Jacques Lemaire came back to Jersey and Rolston never did wind up getting claimed. His play dating back to late-February was definitely noteworthy as he managed three goals and four assists over a nine-game stretch. Unfortunately, Tuesday marked his third straight game without a point, and he’s gone -4 over that stretch, so you can be sure that he’s winding back on most league’s waiver wires.

Looking for a sneaky play on the Devils down the stretch? How about rookie centre Jacob Josefson? He set up Kovalchuk’s goal to give him two goals and four assists over the last six games. A player the Devils traded up to draft in 2009, Josefson is an off-the-radar Fantasy asset right now, but if his current hot play continues, you can bet his name will be known to all soon.

In the preseason, we liked defenceman Andy Greene as a sleeper on the Devils, but he hasn’t come to close to showing the offensive flair he did last season. He’s managed just one assist over his last nine games, and is -4 over that stretch. And yes, Fantasy owners are dumping him; he’s now owned in less than half of ESPN leagues. Greene enjoyed a fine season in 2009-10, but now we remember why he came into the NHL as an undrafted player in first place.

Two weeks ago, defenseman Anssi Salmela was an overtime hero in a win over the Islanders; unfortunately, that’s his only goal in 39 games and worse yet, it’s the only point he’s managed in well over a month. So needless to say, Salmela is not a name you need to worry about from a Fantasy perspective.

Martin Brodeur’s disastrous start this season was as much a reason why the Devils found themselves behind the 8-ball as any. In fact, as recently as late-January, we examined Brodeur when assessing if various players were toast, and came to the conclusion that Marty was not done yet. He’s definitely proved us right, becoming a virtual must-own player again. He turned things around in January, was stellar in February, despite missing most of the month with a sprained MCL, and has continued to be lights out in March. Tuesday was not his finest hour (especially after earning a shutout against Columbus in his last game), but Brodeur still stopped 26 of 29 shots (the final Bruin goal was an empty netter) in his 12th straight start since returning from the knee injury.

By RotoRob
This entry was posted on Wednesday, March 23rd, 2011 at 2:47 pm and is filed under HOCKEY, NHL Today, RotoRob. You can follow any responses to this entry through the RSS 2.0 feed. You can skip to the end and leave a response. Pinging is currently not allowed.