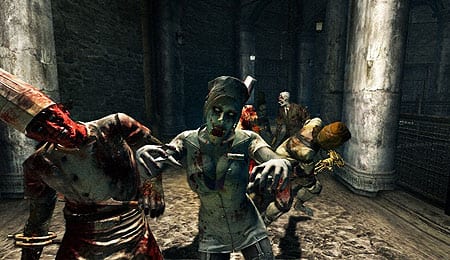 I prefer my nurses a little more naughty and a little less nasty.

If my fellow Kinect owners are anything like me, they’ve had September circled on their calendars because of the releases of the first two “adult” games for the peripheral — The Gunstringer and Rise of Nightmares — to see how it performed outside its dancing/mini-game comfort zone. We already tackled the first of those titles, and now it’s time to see how SEGA’s Rise of Nightmares holds up.

Without question, Rise of Nightmares offers the most ambitious use of the Kinect to date… though that ambition leads to plenty of missteps and pitfalls along the way. Let’s start with the good. Combat is generally pretty fun and responsive. You enter “focus mode” by raising your arms into a boxing position, and once there you can block attacks, throw punches, wield weapons and kick away foes. Once in a while the Kinect won’t read your motions properly, but overall it’s good.

Navigating is another matter entirely. Walking is done by extending one foot forward from a standing position and holding it there (sticking it out further makes you walk more swiftly) — you back up by moving your foot backward — while rotating your upper body turns your view right and left. While that may not sound particularly complex, in practice it’s the game’s real “nightmare.”

For starters, it seemed that no matter how far forward I strode my character moved at the pace of a wounded snail, which isn’t exactly conducive to escaping tight situations. The Kinect also had a lot of difficulty consistently distinguishing between me putting a foot forward or backward. That led to me backing up into spike traps when I wanted to advance on an enemy.

Clearly SEGA knew there were serious issues with that aspect of the game, and it has added an auto-walk feature to assuage them to some degree. You activate the function by holding your right arm in the air, and believe me when I tell you that you’ll be striking that pose a lot. It works well enough, though you can’t backtrack or explore with it. Plus, there are sections that don’t allow it, and those are often the times you’d like to have it the most (read: avoiding deadly traps).

When Rise of Nightmares works well it really offers a taste of what the Kinect is capable of. You just have to hope that developers are able to take these fundamentals and fine tune them to create more responsive control schemes moving forward.

Atmosphere is critical to the success of a survival horror game, and there are definitely some good elements at work in Rise of Nightmares. The entire game is slathered in browns and dried blood reds to give things a creepy feel. There’s no skimping on the gore factor, either, as creatures are killed in a sea of severed limbs and spurting blood — a combination that produces an effectively disturbing ambiance. Conversely, the stiff character models look outdated, and the castle, while creepy, is lacking detail work and has a recycled design.

In this genre, quality audio is arguably more important because there’s something even more unnerving about hearing something before you see it. Unfortunately, Rise of Nightmares comes up short across the board on that front. The biggest culprit is the “B”-movie voice acting that manages to make the already cheesy dialogue even worse. Sound effects and music aren’t bad, but they fail to elevate the tension level.

You primarily play as Josh, who is riding a train through Europe with his wife. An unresolved drinking problem causes a bit of a tiff between the two of them, leading to her wandering off. You strike out to locate her only to have some seriously crazy stuff happen on the train. When the dust clears you’re in a creepy Romanian forest and must track down your wife through a madman’s lair.

As anyone that’s ever played the Resident Evil games will tell you, the story in a survival horror game doesn’t need to do much other than offer a reason for you to wander around scary locales and battle unnatural creatures. Even with those low standards, Rise of Nightmares’ plotline is pretty rough. Its locations and villains are total stereotypes that you’ve encountered in one form or another across video games and movies for decades. There’s also plenty of bad dialogue and moments where you take a step back and go, “Wait, what?”

Despite a lackluster story and spotty controls, Rise of Nightmares still provides a solid amount of fun along the way. In what is almost certainly a concession to the work-in-progress feel of moving around the environments, the game is highly linear.

Most of the game boils down to walking pathways and battling a collection of surgically altered foes while searching for your wife. There are environmental hazards tossed in here and there along with some evasion scenarios, but for the most part it follows the “kill everything, then progress” playbook. That’s a good thing because the combat is the most fun part of the game.

The game’s environments are loaded with various weapons, and I do mean loaded. Most of them are fun to wield, though you cannot fall in love with any one weapon as each instrument decays with use. An icon in the lower left-hand corner turns red as this happens and eventually the weapon will break so you’ll need to swap them often. Technically you can defeat enemies with bare fists, but it seemed to take an inordinately long time.

In addition to the standard encounters there are also a handful of boss fights. Unfortunately, these consist of the same hacking and slashing as the other battles with some quick time events mixed in to dodge their special attacks. It just lacks any “big fight” feel.

Rise of Nightmares breaks new ground, offering both a free range of motion and an M rating, and does a lot to inspire hope for the Kinect’s future. It has its fair share of issues, but there’s enough ingenuity and enjoyment here to still be a solid purchase for Kinect owners.

By Herija Green
This entry was posted on Monday, September 26th, 2011 at 11:45 am and is filed under Herija Green, Video Game Reviews. You can follow any responses to this entry through the RSS 2.0 feed. You can leave a response, or trackback from your own site.