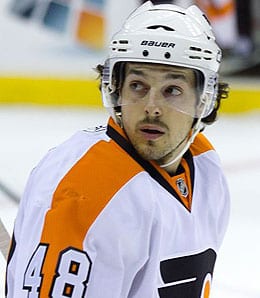 Danny Briere looked good in his return, but the Flyers lost again.

The Philadelphia Flyers were up to their old tricks again Friday, blowing 1-0 and 3-2 leads in a 4-3 overtime loss in Buffalo.

This team has now gone a season-high five games without a win (0-3-2), fumbling their chance of earning the Eastern Conference’s top seed – a ranking that seemed a foregone conclusion a week and a half ago. Hell, the Flyers might not even win their division, which would relegate them to the No. 4 seed.

Right now, Philly is tied with the Penguins for the division lead with 104 points apiece. Each team has one game left, but the Flyers hold the tiebreaker. Of course with the way the Flyers have played down the stretch, this tiebreaker advantage may not even come into play. A game Saturday night at home against the nothing-to-play-for Islanders looks like a slam dunk, but shockingly, I’m not laying any coin on Philly.

On the plus side for the Flyers, centre Danny Briere returned after missing a week with the dreaded “lower body injury.” He had an immediate impact, scoring once and setting up another goal, but he hit the nail on the head with his post-game comments: “It’s so frustrating. We’re not looking at positioning as much as trying to come up rolling to start the playoffs.”

Exactly right. If last season’s playoff run by the Flyers proved anything, it was that it’s not about seeding, it’s about just making the playoffs. Don’t forget that Philly didn’t squeak into the postseason until the final day of the regular season, and it took a shootout win to earn even that. But we all remember what Philadelphia accomplished last spring, coming within two wins of the Stanley Cup.

The key ingredient, as Briere points out, is about entering the playoffs on a roll. And for the last few weeks, the closest the Flyers have come to a roll has been the stale, hockey puck-like buns on the buffet table.

Briere has stayed moderately healthy again this season, and he’s enjoyed his finest campaign since joining the Flyers, at least from a goal-scoring perspective. In his first season in Philly, Briere piled up 72 points in 79 games, but was a -22. This season, he has 63 points in 75 games, but is a career-best +18. He also has more penalty minutes and shots on goal than at any previous season in his career.

Expect Briere to get a ton of ice time Saturday in anticipation for the playoffs, when we’ll probably log 20 minutes or more per game.

Scott Hartnell, one of many Flyers that seems to have disappeared lately, finally came through with a goal and an assist of his own Friday, but his first points this month were not enough to help Philadelphia stop the bleeding.

Heading into the season, we had Hartnell pegged as a top 25 left winger, but he’s played much better than that. In fact, he’s been close to a top 15 player at his position this season despite the fact that he’s slowed down considerably over the past few weeks. After hitting the 30-assist mark in each of the past two seasons, Hartnell only has 25 this season, but he’s made up for that by bulging the twice more often after a dismal 14-goal campaign in 2009-10.

Hopefully the fact that he’s growing out his beard this week (for charity) will mean that we’ll again see the menacing-looking psychotic that shone so impressively in last season’s playoff run. The Flyers could definitely use the spark that he is capable of supplying.

Kris Versteeg had the other goal for the Flyers, snapping a five-game pointless streak. Like I said, there have been plenty of players on this team who’s mugshots have shown up on milk cartons over the last couple of weeks. Since being dealt to Philly, Versteeg hasn’t been nearly as productive as he was in Toronto, which isn’t really surprising given that he’s seeing less ice time in a much deeper forward group. I still have no idea why the Flyers gave up their first round pick (and third rounder, to boot) to add depth to the one part of their team that did not need help. But that’s a whole other kettle of fish.

At any rate, Versteeg’s short-handed goal (the Flyers’ 13th of the season, tied for second most in the NHL), put him over 20 goals, and he’s had at least 20 for three straight seasons, but he has yet to build on that big rookie season he had with the Blackhawks. And he definitely hasn’t lived up to our pre-season billing as a top 25 right winger.

Versteeg is a fine agitator that should help this team in the playoffs (he does bring another Stanley Cup ring into the room), but I don’t see him as more than a supporting player, and you don’t trade first round draft choices for that.

So Friday marked just the sixth time this season the Flyers have blown a lead they carried into the third period (37-1-5), yet another worrisome trend for a team that is limping into the postseason. And after last season’s amazing run, Philadelphia won’t be sneaking up on anyone this spring.

What’s worse is what happened after the Flyers blew a 1-0 lead at the end of one by allowing the Sabres to score twice early in the second. Philly stormed right back and scored twice in 39 seconds to regain the lead, and you had to figure that outburst would give them the momentum, right? Apparently not, given that they allowed the Sabres to tie it at 3-3 midway through the third and then surrendered a goal early in overtime to end it.

The scarier part for Flyer fans is that this could wind up being a first round preview. Do you really want to face a Buffalo team that has been playing at a very high level for months and now has the confidence of a comeback win against your team?

By RotoRob
Tags: NHL
This entry was posted on Saturday, April 9th, 2011 at 12:48 pm and is filed under HOCKEY, NHL Today, RotoRob. You can follow any responses to this entry through the RSS 2.0 feed. Both comments and pings are currently closed.