The Wire Troll: Matt Hasselbeck Turns Back the Clock 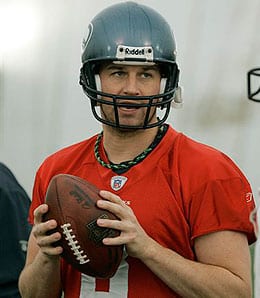 Has Matt Hasselbeck found the Fountain of Youth in Tennessee?

Well, the premiere NFL edition of The Wire Troll is fast fading in the rear-view mirror, and we’d like to say thanks to all of you who have taken the time to tell us that you dig what we’re doing. Hopefully, some of the advice that we’re doling out will help carry you to Fantasy fame and — more importantly — fortune. Rest assured, we don’t take any of your questions lightly, and when we opine it’s based on every bit of information we can find out there.

This week, a couple of big-time players suffered injuries that could alter the Fantasy landscape, though at least one — Michael Vick — sounds like he’s going to give it a go come Sunday. A lot of things can happen between now and then, though, and there’s no better way to keep up with the Fantasy implications therein by following the Wire Troll on Twitter. With that, let’s have a look at some of the week’s top pickups.

Matt Hasselbeck, Tennessee Titans: No need to check your calendars — and yes, I know, you don’t own one… there’s an app for that. Bully for you, tech-boy. It’s really still 2011, and that’s really Matt Hasselbeck sitting in fourth place in the AFC with 932 passing yards. Even the loss of top target Kenny Britt last week didn’t slow down the ‘Beck, as he racked up 311 passing yards and two touchdowns against an admittedly porous Denver secondary. Don’t forget, though, the 36-year-old signal-caller shredded the Ravens for 358 yards in Week Two, so perhaps a renaissance is upon us. Hasselbeck is available in about 70 per cent of Yahoo! leagues and is worth adding as your backup in deeper leagues — even though he faces a pair of tough matchups in Cleveland and Pittsburgh the next two weeks.

Darren Sproles, New Orleans Saints: Throwback Week continues, as we pay homage to the diminutive former Charger, who has found a nice niche as the Saints’ primary target out of the backfield. Through three weeks, Sproles has piled up 168 yards receiving, and has scored two total touchdowns. He’s never been much of a scoring threat, but when Sproles is on his game (now, for instance) he can be a solid Fantasy producer in PPR formats.

Bernard Scott, Cincinnati Bengals: Wow, a Bengal in trouble? What’s next, LiLo in rehab? Cedric Benson has drawn a three-game league suspension, but he is currently appealing that punishment. If he indeed lands on the shelf, Scott would take over as the primary ball carrier in Cincy. While he’s not a special talent, he did average 4.9 yards per carry in limited duty last season. Go ahead and add Scott in deeper leagues, and he’s a must-own if you have Benson on your roster. Watch the status of Benson’s appeal and be ready to pull the trig… ah, let me rephrase that — these are the Bengals, after all — make your move on Scott if the suspension is upheld.

Kendall Hunter, San Francisco 49ers: Frank Gore has been more Bore than Gore thus far, and when he tweaked his ankle Sunday it was Hunter who stepped in and made his presence felt. On the day, the rookie rushed for 26 yards and a touchdown, and certainly looked like someone who could provide a spark to what’s been a lackluster offence. He’s a bit undersized to be a feature back, but Hunter is definitely worth grabbing in deeper leagues — especially if you own Gore.

Nate Washington, Tennessee Titans: Just when Britt looked to be headed toward the breakout season we’ve been waiting for, he tears both his ACL and MCL and is now done for the year. Enter Washington, who has snagged a total of 17 receptions for 191 yards and a touchdown over the past two weeks. The veteran wideout has been in the limelight before, but has never fulfilled what many saw as a rather large potential. He’s unquestionably the top aerial option in Tennessee right now, though, and is worth owning in just about every Fantasy league.

Victor Cruz, New York Giants: Domenik Hixon is out for the season, and starter Mario Manningham is dealing with a concussion, so the potential is there for Cruz to assume a larger role in the Giants’ aerial attack. He showed some legitimate deep-ball skills Sunday, nabbing three receptions for 110 yards and two touchdowns, but his Fantasy prospects are tied to Manningham’s health, and the veteran may be back in Week Four. Keep an eye on this situation — concussions are tricky things — but for now Cruz is probably only worth adding in very deep leagues.

Torrey Smith, Baltimore Ravens: The rookie speedster stepped in for an injured Lee Evans and torched the Rams’ overmatched secondary for 152 yards and three touchdowns Sunday. Smith is a hot pickup right now, but the Troll urges caution if you’re thinking of adding him; keep in mind that he’s a rookie and that the Rams’ secondary is among the league’s worst. Keep an eye on Evans’ health status, as he has said that he’s not sure whether he’ll play in Week Four or not. Smith’s emergence means that the Ravens do not have to rush Evans back so look for the youngster to again be a big part of the B-More passing attack this Sunday.

Randy McMichael, San Diego Chargers: Longtime Fantasy stud Antonio Gates is experiencing problems with his troublesome foot again, and he may be out for an extended period. McMichael filled in nicely for AG last week, posting four receptions for 51 yards. McMichael is not an elite talent by any means, but his athleticism should make him a steady contributor in the Chargers’ high-octane offense… if Gates remains sidelined, of course.

Jason Hanson, Detroit Lions: Hanson has converted all eight of his field goal attempts this year, and has even dropped home a couple of bombs from 50-plus yards. That’s not a bad showing from a guy that was born less than a year after Woodstock (the good one, that is). The Detroit passing offense has an elite look about it, but the Lions are still struggling to move the ball on the ground. That’s a recipe for success for a tried-and-true kicker like Hanson — and keep in mind that he plays his home games in the perfect weather conditions of Ford Field.

Morgan Burnett, S, Green Bay Packers: Burnett had a big game in Week Three, racking up six tackles and picking off two passes. With Nick Collins done for the year, Burnett becomes the “seek and destroy” factor in the Packer secondary, and the second-year man could be in for a monster season in 2011. He has 27 total tackles and three picks in his first three games, and one gets the impression that the best is yet to come. Grab him and watch it happen.

D’Qwell Jackson, LB, Cleveland Browns: Injuries limited Jackson to just six games over the past two seasons, but keep in mind that this is the same guy that piled up 154 total tackles back in 2008. He’s back with a vengeance, amassing 30 total tackles and 2.5 sacks through his first three games. If — big “if” there, gang — Jackson can avoid the injury bug, he could finish among the league leaders in tackles and post a handful of sacks to boot — all for the price of a waiver-wire grab.

Rolando McClain, LB, Oakland Raiders: McLain was a popular IDP sleeper last season, but his numbers — 85 total tackles, 0.5 sacks — didn’t match the hype. He looks to be settling into his role this season, though, and his 12 tackles in Week Three brought his season total to 23. The Raiders’ Mike linebacker has traditionally been a source of triple-digit tackles, and McClain looks to be well on his way to continuing that legacy.

By Buck Davidson
This entry was posted on Wednesday, September 28th, 2011 at 12:28 pm and is filed under Buck Davidson, FOOTBALL, The Wire Troll. You can follow any responses to this entry through the RSS 2.0 feed. You can skip to the end and leave a response. Pinging is currently not allowed.