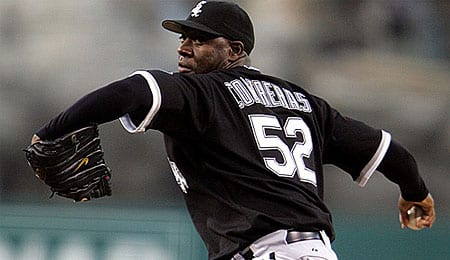 The ChiSox have already farmed out Jose Contreras; could more rotation changes be on the way?

While I’m not absolutely sure that Pedro Martinez isn’t done like dinner, with several teams desperate for starting pitching, his name remains popular among the rumour mongers. The White Sox, for instance, are having some serious problems with their rotation, and something has to give there soon. The team already had to farm out Jose Contreras, and Gavin Floyd can’t get anyone out in his last few starts. Yes, there’s the Jake Peavy-to-Chicago rumours, but beyond that, could the Pale Hose be getting on the horn to Pedro in the near future?

Derek Lowe, part of a major overhaul to the Brave rotation this past offseason, has bounced back quite nicely since taking his worst pounding of the year on May 6. In his two subsequent starts, Lowe has yielded a mere eight hits and four runs over 14 2/3 IP. He has not surrendered a dinger, has walked three and has struck out four. Lowe’s ERA is still up a run over April’s fine showing, but that’s simply because that one ugly start is skewing his numbers. Yes, Lowe is a great Fantasy play, but a couple things worry me about the soon to be 36-year-old. First off, he’s on pace for a career high in innings pitched –and we’re not talking about easy innings here. He’s averaging far more pitches per plate appearance, per inning and per start than he ever has in his career. Combine this with way more walks, and less strikeouts and the fact that while Lowe remains a groundball pitcher, his rates have slipped three years running, leaving him as far less extreme a specimen as he once was, and you’ve got a recipe for failure. I’d venture as far as to suggest that Lowe is a sell-high candidate – especially in a keeper league.

I’ve never been a big fan of his, but I’m sure there are plenty of people happy to see Carl Crawford return to top five status this season. With 25 steals so far (which matches his entire total from 2008) and zero caught stealing, he’s back as the King of Steals, and as a result earned a spot on our early-season All-Star team. While the A’s have done an effective job of slowing him down (2-for-12 with three strikeouts in the first three games of this four-game set), Crawford has been simply blazing this month after a decent April. So far in May, Crawford is batting .368 with 16 runs and 16 steals. Ya, that’ll do, I suppose. While his extra-base pop has been in decline for a few seasons, he’s doing a solid job of getting on base, and that’s the key for theft master Crawford.

By RotoRob
Tags: BASEBALL
This entry was posted on Thursday, May 21st, 2009 at 10:53 am and is filed under BASEBALL, Fantasy Notes, RotoRob. You can follow any responses to this entry through the RSS 2.0 feed. You can leave a response, or trackback from your own site.