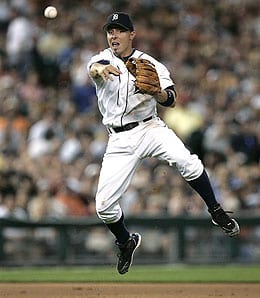 Brandon Inge has been one of the biggest surprises in the first month of the season, emerging as a top 10 AL player.

On Tuesday, for just the second time in his last 12 games, Brandon Inge failed to record a hit, but he did draw a walk to run his streak of consecutive games reaching base to 20 games (the longest for a Tiger since Inge reached in his first 21 games in 2005). After batting a butt ugly .205 last season, Inge says the work he did with hitting coach Lloyd McClendon this spring has made all the difference. He concentrated on raising his hands higher in his stance, and it’s definitely paid off, as Inge has been one of the most popular waiver wire picks early this season thanks to a BA of almost .320 and seven dingers – tied for second in the AL. He leads Detroit with a superb .694 slugging percentage and has driven in more runs than any other Tiger, which is pretty damned amazing considering he’s spent most of his time batting seventh or eighth in the lineup. Shockingly, Inge is just the fifth Tiger to spank at least seven long balls in the team’s first 18 games. Factoring in his catcher eligibility, Inge is currently one of the most valuable Fantasy commodities in the American League. It’s hard to believe he was barely a top 20 catcher and didn’t even crack our top 25 at third base heading into the season.

One player who took a decidedly worse turn after our rankings is Chris Shelton. We ranked him No. 30 among first basemen, but he failed to even make Seattle’s Opening Day roster (despite a fantastic spring). Meanwhile, both Russell Branyan and Mike Sweeney are hitting very well for the Mariners, and Shelton – probably disheartened – has struggled badly out of the gates at Triple-A. He showed some life Tuesday night, going 2-for-5 with his first homer of the season, but with a .239 BA, .304 OBP and 19 strikeouts in 18 games, the 28-year-old Shelton’s prospects are fading. Sweeney will obviously get hurt at some point, so you know Shelton will get another look in the majors, but it’s pretty obvious that great power potential he showed a few years ago in Detroit has gone AWOL.

Ryan Raburn failed to make the Tigers out of Spring Training, and although he hit just .255 at Triple-A, he had smacked five homers, driven in nine runs and swiped a couple of bags in his first dozen games before he got called up by Detroit last week. With Carlos Guillen hurting and limited to DH duties for now, Raburn is seeing some action in left field against lefties, but he’s hitless so far (hey, at least he got a freaking walk on Tuesday). I liked Raburn as a super sup type a couple of years ago before the Tigers made the ill-fated deal to acquire Jacque Jones, but he didn’t see enough action to have value. He got more PT last year, but unfortunately wasn’t nearly as effective. At this point, the recently turned 28-year-old Raburn does not deserve any Fantasy attention, especially with his platoon partner (Josh Anderson) tearing it up.

Despite the shellacking they took Tuesday night, the Tigers are off to a good start, and currently sit atop the AL Central. One of the big reasons for their success has been the rebound of a rotation that was among the AL’s worst last season, but has been among the best so far in 2009. It’s been good news almost all around for the Detroit starters: Armando Galarraga has built on a solid rookie season and is quickly becoming a must-own pitcher; Edwin Jackson is enjoying a breakout campaign; Rick Porcello has shown flashes of greatness, but is going through the typical ups and downs that rookies experience; Zach Miner has struggled, but looked much better in his last start; and Justin Verlander is off to another crappy start, but on Monday, he looked superb, so perhaps he’s turning things around. And now the Tigers are getting good reports about Dontrelle Willis, currently rehabbing after suffering an anxiety disorder this spring. He pitched very well on Sunday at Double-A and will move up to Triple-A for a start on Friday. If that goes well, Willis could be ready to rejoin the big league squad next week, so keep an eye on that situation, as he might be worth picking up if he is going to regain a rotation spot. At this point, Miner or Porcello are the likeliest candidates to be shifted out when the D-Train pulls into Detroit.

By RotoRob
This entry was posted on Wednesday, April 29th, 2009 at 9:15 am and is filed under BASEBALL, Fantasy Notes, RotoRob. You can follow any responses to this entry through the RSS 2.0 feed. You can skip to the end and leave a response. Pinging is currently not allowed.