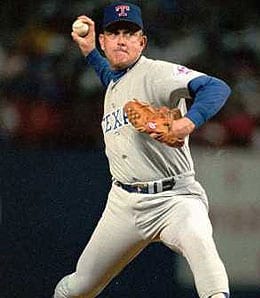 Randy Johnson earned his 299th career win on Wednesday, setting up the possibility that he’ll become perhaps the last pitcher ever to reach the 300-win mark next Wednesday in Washington, something Tim talked about in his most recent Podcast. Next on the career win list is 74-year-old Jamie Moyer, who is one shy of 250 wins, but looks done like dinner. No one else is closer than 81 wins away, and of those hurlers, they are all on their last legs. In fact, the only current pitchers I see even having a remote chance for a run at 300 are C.C. Sabathia and Johan Santana, but I have a feeling that in the case of Santana, he’ll break down well short of the mark.

Anyways, the Big Unit might be worth another look if he’s available in your league. He had been coming off three bad starts in a row, but has now thrown back-to-back solid outings (11 1/3 IP, 9 H, 2 R, 0 HR, 3 BB, 12 K). Johnson had a rough April, but he’s been a bit better in May despite still surrendering too many hits. While the old guy’s been healthy so far this season, his big problem has been the long ball – shockingly, Johnson is averaging one home run allowed per start for the first time in his extremely long career. He’s generally having to work harder to each hitter, not surprisingly given that his K/9 has bounced back this season. But the fact of the matter here is that Johnson has been winding up on a few waiver wires. I think that might be a mistake; he can still help you if you employ him wisely. By the way, Johnson has fanned nine batters in a game twice this season; against the free-swinging Nats, could he bag his first double-digit strikeout game at the same time as earning the milestone win? That would make for one hell of a story. On a related note, I found this a bit shocking: Johnson, along with Nolan Ryan and Roger Clemens, are the only three pitchers in major league history to have at least 100 career double-digit strikeout games; Johnson has 175 of them. Also hard to believe is that it’s now been almost 11 years since the Big Unit was dealt from the Mariners to Houston.

By now you’ve heard that crazy man Carlos Zambrano was nailed with a six-game suspension after his latest meltdown. It still irks me that suspensions are doled out the same for hitters and pitchers, even though that only translates into missing one start for the starting pitcher, but that’s neither here nor there. At any rate, Cubs manager Lou Piniella – obviously mellowing in his old age – thought the ruling was fair. The Cubs, meanwhile, continue to flounder. They lost a squeaker to the Dodgers Thursday, 2-1, and have now fallen to .500. They’re now three games behind the surging Reds for third place in the NL Central, and even the Pirates, who have held their own lately, are just 2.5 games back of the Cubs. When will Mr. Mellow Piniella’s job be in jeopardy?

By RotoRob
This entry was posted on Friday, May 29th, 2009 at 9:16 am and is filed under BASEBALL, Fantasy Notes, RotoRob. You can follow any responses to this entry through the RSS 2.0 feed. You can skip to the end and leave a response. Pinging is currently not allowed.