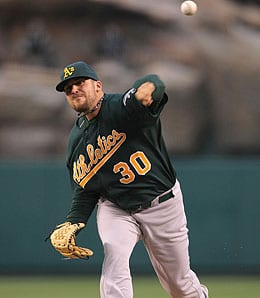 If for some reason you own Dana Eveland, make sure you don’t have him active for his start at Yankee Stadium Tuesday.

What would the start of a new season be without drama in New York? We’ve already discussed Chien-Ming Wang’s early-season issues, but the Yankees have also been left scratching their heads over the propensity of home runs flying out of their new park. After 20 dingers were hit in the four-game set against Cleveland (a new record for long balls in an opening series for a new park), Mother Nature proved to be only force capable of keeping the ball in the park as Monday’s game against Oakland was postponed due to weather. It’s been a crazy week for the Yanks, as they gave up a franchise-record 14 runs in one inning Saturday (thanks, Wang!). It’s a small sample size, but based on the early fireworks, fantasy owners would be well-advised to leave any pitchers scheduled to start in New York on their bench for now. That applies to Dana Eveland and Brett Anderson this week. If you own Yankee starters, it’s going to be pretty tough to shuttle them in and out of the lineup depending on whether the team is home or away, so at this point, I’d just hope for the best and adjust accordingly once we have more data to analyze. On the flipside, it might be wise to start any marginal A’s hitter, such as: Kurt Suzuki, Mark Ellis, Eric Chavez and Ryan Sweeney.

How smart do the Dodgers look, having signed Orlando Hudson to a deal with a fairly low base salary but heavy incentive options? The O-Dog looks like a man possessed, running his hit streak to six games on Sunday, a streak that started when he hit for the cycle last week. He’s on pace for 249 hits and is pounding the ball with authority (.635 SLG). Hell, he’s even running, having already matched last season’s total of four steals. Yes, he dealt with some injury issues the past two years, but his three seasons in Arizona were the finest years of his career and at the age of 31, he’s got plenty left in the tank. If Hudson is still sitting on your wire, you better move fast as he is quickly establishing must-own status.

Jason Kubel, one of the hottest waiver wire choices around, finally cooled off Sunday with an 0-for-4 performance. In the previous two games, which included him hitting for the cycle on Friday, all he had done was gone 8-for-10 with five runs, two doubles, a triple, a homer and seven RBI. It’ll do. We’ve all been waiting for Kubel, who turns the magical 27 next month, to explode for several years. A 15-for-45 start with power is a darn good start. Yes, Minny’s OF/DH situation is crowded, but is this the season Kubel breaks through big time?

Kubel has been one of the few Twin hitters doing well in the early going and that bodes well for Tim Wakefield, who gets the start at home against Minny Tuesday evening. Does anyone doubt that this 42-year-old is still capable of helping your team after he pitched 7 1/3 innings of no-hit ball, settling for a complete game four-hitter in his last start? Wakefield quietly was among the AL leaders in WHIP last season, and he’s doing it again in the early going. He remains an innings eater and the fact that he has yet to give up a homer this season is definitely helping Wakefield keep his ERA down (3.00). With his K/9 dipping, Wakefield’s use in 5×5 leagues is limited, but he’s still a great asset in 4×4 leagues. Go ahead and pick him up.

When we ranked Kurt Sukuzi as the 19th best fantasy catcher heading into this season, I mentioned that this was a key year for him as he looks to solidify his status as a starting backstop. The early results are not impressive, as his extra-base pop has been almost non-existent through 45 at bats. He’s a decent pickup in AL-only leagues just because of his job security, but I’ll be watching Suzuki closely this season to see if his offensive game can develop at all.

With starting shortstop Stephen Drew nursing a sore hammy, Augie Ojeda has started the past three games for Arizona, and looks like a decent short-term pick in a deeper NL-only league. He was 2-for-4 with a run Monday, making him a combined 5-for-12 in the three games he’s started in Drew’s absence. Although he wasn’t particularly effective, Ojeda got a ton of action last season as a backup, appearing in a career-high 105 games. The way he’s smacking the ball around so far this year, however, Ojeda looks like he could provide some legitimate value should Drew remain out for a significant period of time or if Felipe Lopez gets hurt.

Another good NL-only pickup is Jody Gerut, who after delivering an RBI single and scoring another run on Sunday now has a four-game hitting streak. Gerut caught our eye last May as a good waiver wire pickup and he certainly justified that call with his play through the summer months. It looks like he’s doing his thang again, as the 31-year-old is hitting .314 with 10 runs and five RBI through a dozen games and 35 AB with an excellent OBP of .385. Gerut made history last week, leading off the first game in CitiField with a home run – the first time a new stadium witnessed a leadoff hitter go yard.

Finally, we’d like to bid a fond farewall to long-time Phillie broadcaster Harry Kalas and 1976 AL ROY Mark “The Bird” Fidrych, both of whom passed away last week.

By RotoRob
Tags: Dana Eveland
This entry was posted on Tuesday, April 21st, 2009 at 1:58 pm and is filed under BASEBALL, Fantasy Notes, RotoRob. You can follow any responses to this entry through the RSS 2.0 feed. Both comments and pings are currently closed.