Fantasy Notes: The End of the Line 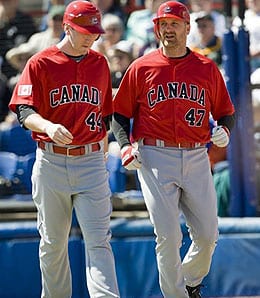 Corey Koskie (47), seen here with Team Canada at the WBC, called it quits after failing to make the Cubs. (Reuters)

With the young season now over a week old, it’s time for us to compile our first Fantasy Notes column of 2009. Today, we’re going to look at a few players who are either ending their careers, should end their careers, or are just plain struggling.

Corey Koskie, whose comeback bid with the Cubs this spring failed thus sending him officially into retirement, will be honoured by the Twins late next month. It’s a nice touch by Minnesota, where Koskie spent the first seven seasons of a nine-year career cut short by post-concussion syndrome. Koskie enjoyed a superb rookie season in 1999, racking up 106 hits, 21 doubles, 11 homers, 40 walks and four steals in less than 350 AB, while batting .310 and recording an OPS of 855. His breakout year came two seasons later when he scored 100 runs, had 155 hits, 26 homers, 27 steals and hit .276 with an OPS of 850. All told, the Canadian-born third baseman played 989 games and accumulated 3,399 at bats in which he smacked 124 homers, scored 516 runs, drove in 506 others and stole 71 bases. His lifetime BA was .275 with an OPS of 825. It’s truly a shame that his career ended in such a frustrating manner, but nothing can take away from the fact that he enjoyed a damn fine career as a 26th round pick.

David Ortiz’s wrist issues ruined his 2008 and many fantasy owners chances, so much so that Big Papi earned consideration as our Fantasy Dud of the Year. Well, the Dominican star is healthy this season, but given his early struggles, it’s hard to tell. Ortiz is off to a horrible start, and is still seeking his first extra-base hit after six games. However, his batting eye has been strong, and he did show signs of life Sunday, going 2-for-4 with an RBI and a walk. Let’s not panic yet, but Ortiz owners have some reason for concern until he starts to pound the ball like we’ve all come to expect.

Speaking of players falling from grace, what a precipitous slide it’s been for Jacque Jones. This time last season, we were expecting him to be part of what was supposed to be a historic Tiger lineup. After 24 horrible games in Detroit, he was released. Jones would up in Florida by May, but was — if possible – even worse as a Marlin. By June, he has been released by a second team within a span of two months. After enjoying a fine season of winter ball in Mexico, Jones tried to catch on with the Reds this spring. He was simply awful and failed to make the team. Worse yet, Cincy decided it didn’t even have room for Jones on its Triple-A squad, releasing him outright last week. If this is the end of the line for the 33-year-old Jones, he finishes his 10-year career with 165 homers and 630 RBI in 4,594 AB with a lifetime OPS of 774. His best season was probably 2002, when he scored 96 runs with 27 homers, 85 RBI, six steals and put up a .300/.341/.511 line in 149 games for the Twinkies.

Another rapidly aging former Twin outfielder whose attempts to get back to the majors are failing is Bobby Kielty. The BoSox re-signed him to a minor league deal last year, and we thought he might play a role with the parent team at some point, but hand surgery ended that hope. He wound up back in the Minnesota organization but was limited to just 49 mostly ineffective minor league games for the entire season. This spring, Kielty failed to stick as an extra outfielder for the Mets, and is currently toiling for their Triple-A team in Buffalo. Judging by the early returns (.176 BA with no extra-base hits through four games), Kielty won’t be getting back to the bigs for the first time in 2007 any time soon.

Did you happen to notice that veteran Doug Mientkiewicz somehow made the Dodgers out of Spring Training? As we expected, he won’t be doing much more than pinch-hitting and acting as a defensive sub, so there’s nothing to see here for fantasy purposes (especially given that he’s failed in all three PH chances so far). If Mientkiewicz gets anywhere near the 285 at bats he had last season, I suspect the Dodgers will be in serious trouble. In fact, I wouldn’t be shocked if he’s jettisoned from the team before the All-Star break.

Earlier this month, another blast from the past came across my desk when I saw an article about the Wichita Wingnuts’ team for the upcoming Northern League 2009 season. Remember Dustan Mohr? He last appeared in the majors in 2007, but didn’t enjoy any success with Tampa Bay. Well, after looking absolutely useless at Triple-A Colorado Springs last season (546 OPS in 19 games), Mohr wound up in Indy ball. And while he didn’t exactly do enough to warrant a return to organized ball (.244 BA, .714 OPS), it was enough to earn a return engagement with the Wingnuts in 2009. I don’t like the 32-year-old’s chances of getting back to The Show, where he recorded an OPS of 744 in 504 games, any time soon.

Remember Tom Prince, the back-up catcher who played 519 games in a 17-year big league career? Well, for the past few years he’s had one of the toughest jobs in baseball, as a manager in the Pirate organization. He’s back at the helm of Rookie-level Bradenton of the GCL for a third season, trying to teach youngsters a winning attitude in an organization that is legendary for its futility. Among the players under Prince’s care last season was Venezuelan second baseman Adenson Chourio, who hit .335 and swiped 30 bases in 49 games before a promotion to Low-A.

By RotoRob
This entry was posted on Monday, April 13th, 2009 at 3:09 pm and is filed under BASEBALL, Fantasy Notes, RotoRob. You can follow any responses to this entry through the RSS 2.0 feed. You can leave a response, or trackback from your own site.