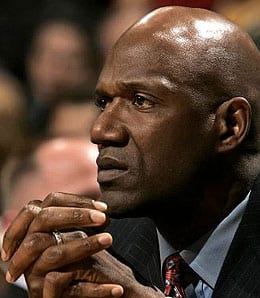 The basketball gods have chosen to ignore Terry Porter’s prayers for more wins in Phoenix.

The Phoenix Suns must be pretty damned happy to be heading home for the All-Star Game, secure in the knowledge that at least someone will be engaging in some stunning play this weekend when Phoenix hosts the festivities. Because, man, Phoenix fans sure as hell haven’t been treated to a hell of a lot of good play from their Suns lately. This is a team that’s been built for a run at the title for several seasons now, but is in free fall mode and could very well be on the verge of being blown up. From 61 wins two seasons ago, to 55 last year, and this season? Thanks to an ugly 6-10 run over the past month, including back-to-back 17-point losses, Phoenix is only on pace for 45 wins for the season. The Suns looked pretty good heading into Christmas, but now look overmatched.

Currently, Phoenix is in ninth place in the Western Conference and on the outside looking in at the playoff picture. Fortunately, eighth-place Utah doesn’t exactly look ready to pull away and, below them, the Suns have no one to fear. But if Phoenix doesn’t get its act together real fast, I think we could be looking at a major rebuilding program in the desert very soon. Working to their advantage, the Suns have an easy go of it coming out of the break, with a home and home against the pathetic Clippers and then another easy home game against Oklahoma City before Boston pays a visit.

Of course, coming off serious beatdowns in Philly and Wednesday night in Cleveland, nothing can be considered easy for these Suns. But they do have a chance to start the second half on a run, so optimism is warranted. Sort of.

Getting hammered by the Cavs especially stung, considering how much Phoenix has had Cleveland’s number in recent years. In fact, the 109-92 loss snapped the Suns’ four-game winning streak against Cleveland. Dating back even further, Phoenix had been on 15-4 run against Cleveland. But as we have all seen this year, these are not your father’s Cavaliers.

Steve Nash definitely is ready for the All-Star break. The dude has been so badly beaten up of late, that Coach Terry Porter decided to give him Wednesday off to get an extra couple of days rest before the second half. A right shoulder problem that he says has caused him pain for weeks has made him a bit gun-shy from downtown. Have you noticed that Nash is attempting just two 3-pointers per game this month? Worse yet, he’s only sinking a fifth of them. Captain Canada definitely needs some downtime, but I’d be very worried about his prospects in the second half, especially if Phoenix starts to slide out of the playoff chase. Wait for a couple of nice lines and then peddle him. Speaking of peddling Nash, he’s been discussed in trade rumours, but the team says that he’s untouchable.

With Nash out, Amare Stoudemire got extra touches – 21 of them to be exact. He only sunk nine, but combined with his excellent work at the line, that was good enough for 27 points – his highest scoring game since January 29. Stat hasn’t exactly been dominating the glass the past three games, but he did record his second straight three-block game. Still, it’s pretty obvious that he’s mentally checked out of this situation given his recent comments. The rumours are flying fast and furious now, and a trade out of Phoenix can’t happen soon enough for both him and the team. Stoudemire has stayed healthy again this season, but after shooting a career best 59 per cent last year, he hasn’t come close to matching that, and his scoring has dropped off substantially as a result. He’s also struggled to share frontcourt touches with Shaquille O’Neal, as the two of them tend to trade big nights, but rarely have good games together.

Grant Hill, who we recommended as a decent wire pickup back in December, has proved to be a bit inconsistent lately, but he came through with an efficient 14 points Wednesday on 6-of-8 shooting, adding five boards, three assists and a block. Hill has been playing a bit less the last couple of months, but he’s been highly efficient (he’s now shooting a career best 52.5 per cent from the field) as his scoring just keeps rising each month. Another untouchable (according to the Suns’ brass), Hill could be in for a big hike in offensive responsibilities depending on how the trade deadline shakes out for Phoenix.

Phoenix, the best-shooting team in the NBA, shot 65 per cent in the first half on Wednesday, yet somehow trailed 64-52 heading into the second half. What’s up with that?

Normal second-unit offensive sparkplug Leandro Barbosa — another apparent untouchable on the Suns — got the start at PG with Nash out. And while being the floor general seemed to affect his offense (he was just 4-for-10 for nine points and one 3-pointer), he did manage to drop seven dimes and pick up four boards with two steals, so all was not lost for his owners. Barbosa has cooled off from downtown tremendously after his blazing January, but he’s still filling it up from beyond the arc better than he was to start the season. Overall, however, this has been an incredibly disappointing season for the Brazilian Blur, who has simply not been able to build on his breakout campaign of two years ago. Clearly, he’s no longer a must-own fantasy asset in standard sized leagues.