The Wire Troll: Another Batch of Blatche? 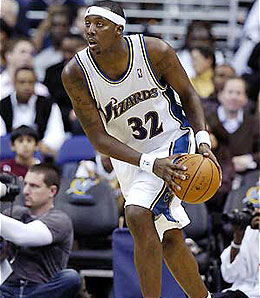 Andray Blatche has teased us with his talent before, but we think this time it might be worth the risk.

Andray Blatche, Washington Wizards: After coming off the bench in all but one of his first 21 games this season, Blatche has started Washington’s last three, averaging 14.7 points and 7.0 rebounds per game. If he keeps getting 30-plus minutes a night he could post some quality fantasy numbers. Consider him a nice sleeper addition and someone to acquire now before less informed owners take notice. Just keep in mind that Blatche was also a major sleeper heading into the season and he has struggled to maintain consistent value.

Matt Bonner, San Antonio Spurs: The University of Florida product has started each of San Antonio’s nine games this month and is averaging a respectable 11 points and 6.8 boards per contest. He has made at least one three pointer in each game and is 37-for-75 on the season. That added dimension makes him a valuable addition for owners that need help supplementing their three-point shooting.

Tyrus Thomas tallied 38 points and 14 rebounds in a two-game span recently, but has played just five minutes in the team’s last three games because of a concussion. He’s a flier option in deeper leagues if you’ve got the room…Chris Wilcox missed just two games after dislocating his finger and has reached double figures in seven of his last 12 contests. He has averaged better than 13 points and at least seven rebounds per game in each of the last three seasons, meaning it might be a good time to buy low on Wilcox…however, bear in mind that Nenad Krstic has signed an offer sheet with the Thunder, which the Nets are not expected to match, meaning the former first-round pick could be Oklahoma City’s starting centre before the New Year.

Francisco Garcia, Sacramento Kings: Garcia has reached double figures in each of Sacramento’s nine games this month, averaging 14.6 points during that stretch. The absence of Kevin Martin may be a big part of Garcia’s success, but the fact that he may be a short-term solution shouldn’t dissuade you from pulling the trigger to acquire him.

Jamario Moon’s first six games since returning to the starting lineup went well as he averaged 10.3 points, 8.0 rebounds, 1.8 steals and 1.3 blocks per game. He laid an egg in San Antonio on Saturday (1-for-5, two points, four boards in 19 minutes) but is still a decent addition… Thaddeus Young and Marreese Speights should see increased minutes with Elton Brand (shoulder) on the shelf. Young has taken Brand’s spot in the starting lineup and is a capable scorer – 13.1 PPG, 4.8 RPG on the year – while the rookie Speights has reached double figures in three straight games. Young is the better option at this point, though Speights has some value in deeper setups…Grant Hill is putting up solid totals since the addition of Jason Richardson, scoring between nine and 15 points in all four games and chipping in with 4.4 boards per contest. Terry Porter would be wise not to run him into the ground the way Mike D’Antoni did, which means you shouldn’t expect much more than those totals the rest of the way.

Nate Robinson, New York Knicks: After missing seven games in an eight-game stretch, Robinson has returned with a vengeance, racking up a cool 100 points in four contests since coming back. He’s a natural fit for D’Antoni’s up-tempo offense and always contributes more boards and dimes than his 5-foot-9 frame suggests he should. Odds are he’s already taken, but if someone made the short-sighted mistake of cutting him loose during his recent absence you should pounce immediately.

We mentioned Lou Williams and Rodney Stuckey in this space last week, and since then neither man has done anything to discourage our endorsement. Both players should be owned in all leagues at this point – don’t hesitate any longer…Jarrett Jack has poured in 79 points over the past four games, playing better than 30 minutes in three of them. He’s playing behind talented, but oft-injured T.J. Ford, which makes Jack an attractive stash option for owners with available bench slots…Daequan Cook has been a monster from downtown in Miami’s past five games, draining 18 threes in 32 attempts. He’s still a little inconsistent with his scoring, but if you’re looking for a boost behind the arc, Cook could be your man.

By Herija Green
This entry was posted on Sunday, December 21st, 2008 at 3:05 pm and is filed under BASKETBALL, Herija Green, The Wire Troll. You can follow any responses to this entry through the RSS 2.0 feed. You can skip to the end and leave a response. Pinging is currently not allowed.