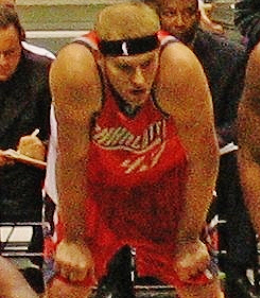 Jake Voskuhl will again be a backup for the Bobcats. (Jeramey Jannene)

Three in the Key, our basketball column at CREATiVESPORTS.com, is being wound up as the site has decided to no longer cover the sport. It’s the end of run that dates back almost two years now (cue the sad music, with starving children, forlorn-looking puppies, or pathetic, heart-wrenching image of choice).

But for RotoRob.com readers that just means we’ll have more time to cover hoops here! We plan on making a more concerted effort to concentrate on basketball on the site, especially as baseball winds down and the NBA season nears. And before you know it, it will be time to reprise our column, Position Battles, over at Rotoworld.com. So not to worry, people: b-ball may be underappreciated in some places, but it’s alive and well here (especially since we just got Raptors TV…sweeeeet).

Anyways, our final Three in the Key includes coverage of the Bobcats re-signing Jake Voskuhl; Vince Carter thinking that there’s no place like home; and the possible return of a 31-year-old Dominican who hasn’t played in the NBA in five years.

Please note that CREATiVESPORTS has decided to cease coverage of basketball, focusing on baseball and football. While there may be the occasional basketball column on the site, this will be the final Three in the Key. Thanks to all our readers who have provided great feedback over the years. Bear in mind, however, that those of you who crave my basketball ramblings, can continue to get your fix on www.RotoRob.com.

In the meantime, let’s bring you up to speed on the latest news from around the hardcourt world.

Voskuhl Back with the Bobcats

Jake Voskuhl, a tremendous disappointment as an NBA player so far, re-signed with Charlotte last week and is expected to reprise his role as back-up center to Primoz Brezec.

Voskuhl was actually very strong down the stretch, playing his best in April when he averaged over 6.0 points, 4.4 rebounds, over 1.0 assists and 1.11 blocks in 18.9 mintues. Known for his toughness and intelligent play, injuries have been the primary factor in his inability to establish himself as a solid NBA player to date (he’s played just 89 games in the past two seasons thanks to health woes).

Voskuhl got a two-year deal at $2 million per season from the ‘Cats, but he has an opt-out clause that would allow him to become an unrestricted free agent after the 2006-07 season. His agent believes that if Voskuhl could just get a full and healthy season under his belt, his physical play, mean streak and nice shooting touch will make him an attractive target to many NBA teams.

Voskuhl is now 28 years old, and showed anything but a nice shooting touch last season, but given playing time, he could emerge as a decent shot blocker. He’s the kind of player you need to put on your watch list and see how his playing time, and more importantly – his health – pans out this season. Voskuhl could prove to be an astute waiver wire pickup if things break right.

Vince Carter has recently made it known that he’d like to finish his career close to home, in Florida where he grew up. With a contract that allows him to opt out at the end of this coming season, he could be wooed by the Orlando Magic, a club expected to be way under the salary cap next offseason.

Carter enjoyed a solid season with the Nets in 2005-06, finishing 12th in NBA scoring with over 24 points per game. He couldn’t maintain the blistering pace he set when he first arrived in New Jersey midway through the 2004-05 season, but at least he stayed healthy, something he had great difficulties doing while with the Raptors.

Speaking of Toronto, New Jersey opens its schedule on November 1 at home against the revamped Raptors, and any time Carter faces them, sparks fly, so that should be a fun way to kick off the season.

Expect him to again be a Top 20 pick in your draft this season.

Felipe Lopez has said he wants to return to the NBA. The former St. John’s standout, who last played in the association in 2001-02, says he’s waiting for a call from an NBA team.

But despite his standout college career, which included leaving the school as the third all-time leading scorer (behind only Chris Mullin and Mailk Sealy), the swingman’s pro career went downhill after a solid rookie season with the Vancouver Grizzlies in 1998-99 (25.9 MPG, over 9 PPG, 44.6 FG percentage, 3.5 RPG, 1.0 SPG). In fact, Lopez missed the entire 2002-03 season with a torn ACL and MCL, and he hasn’t played a game since.

Now 31, Lopez is expecting a chance to make a come back. The first Dominican ever to play in the NBA, he went 24th overall in the 1998 draft to San Antonio and was dealt on draft night to Vancouver in the Antonio Daniels deal.

Lopez was an excellent three-point shooter in college, leaving St. John’s with the school’s single-season and all-time records for three pointers, but he never sunk more than 19 in any of his four NBA seasons.

At this point, he’s merely a name to tuck in the back of your mind; if he signs somewhere and looks like he’ll actually win a job, you can react to it at the time, but that’s a lot of ifs for someone who hasn’t played a game in over four years.

Williams split last season with the Raptors and Hornets. He sat on the end of the bench in Toronto, playing in just 14 games before getting dealt to New Orleans/Oklahoma City in January when the Hornets were short on big men.

The 34-year-old Williams obviously won’t be drafted in your league, but is one of those players who can prove valuable as a short-term waiver wire pick up when injuries strike. That’s what happened last season with the Hornets, and for a while, he was a productive player. All told last season, Williams averaged 4.6 points, but under four rebounds in 16.5 minutes.

Scratch Jiri Welsch off your draft list – unless your league counts international stats, that is.

The 26-year-old swingman has decided to leave the NBA to play in Spain. Welsch hopes to use the extra PT in Spain to springboard back to the NBA in a bigger role down the road.

He played sparsely for the Bucks last season, making just two starts and averaging just over 4 points with 1.9 rebounds and 1.1 assists.

Welsch was a first round (16th overall) selection of Philadelphia in 2002, which immediately swapped him to the Warriors. He’s played with four different teams in five seasons.

Milwaukee did not try to re-sign Welsch, but apparently other teams were interested in his services.

Welsch, a native of the Czech Republic, was a starter for the Celtics in 2003-04 and scored over 9 points per game.

NEXT: Three in the Key is now officially done on CREATiVESPORTS.com, but it will live on at www.RotoRob.com. Baseball fans can check out Spikes Up every Monday during the season. It will appear next on August 14.