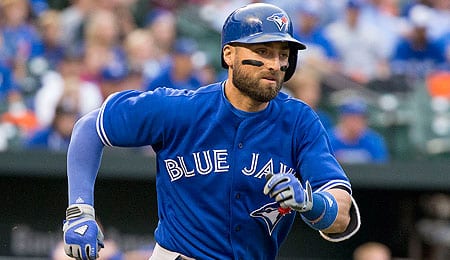 Welcome back to another season of Fantasy baseball waiver wire recommendations. Each week we’ll provide you with a list of players that are not only widely available (owned in a maximum of 50 per cent of ESPN and CBS leagues), but ones we believe offer either short- or long-term (or both) value to your teams.

This week, the Giants signed Melvin Upton Jr. to provide a boost to their outfield play; Trea Turner suffered a hamstring injury on Saturday that will likely cost him a couple of days; and the flu that is battering the BoSox even cost them play-by-play man Dave O’Brien, forcing him to abandon his duties early on Saturday.

Kevin Pillar, OF, Toronto Blue Jays (ESPN: 20.9 per cent; CBS: 22 per cent): The Jays are off to a lousy start, but don’t blame the defensively brilliant (and fearless — see video below) Pillar. All he’s done is hit safely in all five games, buoying hopes that he’s ready to break out offensively after absolutely raking this spring (.345/.406/.500). Pillar was never really one of the Jays’ top prospects, but he was the MVP of the Midwest League in 2012. He showed emerging power in 2015, but some of those homers turned into doubles last year, so we’d like to see him develop that part of his game more before declaring him an asset in standard formats. So far, Pillar’s six hits have all been singles and he has nary an RBI or steal on the season, so it’s merely a hollow BA right now. Once the Jays start hitting, that will change, so jump on him now.

Dayron Varona, OF, Tampa Bay Rays (ESPN: unowned; CBS: unowned): Tampa Bay signed this Cuban veteran in 2015, and after two seasons in its system he seems ready to take on the majors. Varona showed a decent power-speed combo at Triple-A last year, but this season he’s hitting for average early on. He tripled twice on Opening Day and then added another three-bagger plus a single on Saturday. Varona is not on the 40-man roster, but he’s put himself in a position to get a call should injury strike the Rays, so keep an eye on his progress this year. Just note that at age 29, he’s clearly not a prospect, so this is simply a redraft league option should he get a crack.

Howie Kendrick, OF, Philadelphia Phillies (ESPN: 13 per cent; CBS: 15 per cent): The parade of early-season outfield options continues as Kendrick is making the Phillies look pretty damn smart for trading for him in November. He’s enjoyed a pair of three-hit games and a two-hit performance through the first four contests of the season, so if Kendrick can stay healthy like he did last year, it looks like the move to the East coast could really help revitalize his career.

Mark Reynolds, 1B, Colorado Rockies (ESPN: 41.6 per cent; CBS: 35 per cent): Another veteran proving he still has something left in the tank, Reynolds has hit safely in five of his first six games, with four multi-hit efforts and three dingers. After his slugging bounced back last year, the Rox re-signed him this offseason and now look pretty smart for doing so as his power has been through the roof early on as he’s managed as many extra-base knock as games so far.

Chih-Wei Hu, SP, Tampa Bay Rays (ESPN: unowned; CBS: 1 per cent): Hu is another Ray that seems on the cusp of the majors, but here’s a name that keeper league owners need to know. He was absolutely dynamite in the first half at Double-A last year (2.01 ERA), earning a trip to the MLB Futures Game, before fading a bit down the stretch. Even so, Hu led the Southern League with a 2.59 ERA last year. Now at Triple-A, he looked very sharp in his season debut (five innings, one earned run, no walks, four strikeouts), so it’s clearly time to put this kid on your watch list.

Raul Mondesi, 2B, Kansas City Royals (ESPN: 5.7 per cent; CBS: 32 per cent): With SS Alcides Escobar a free agent after 2017, this is an important season for Mondesi to establish himself as a possible internal replacement. With three steals already, Mondesi is providing to be an asset for those that lack speed.

Geovany Soto, C, Chicago White Sox (ESPN: 1.8 per cent; CBS: 9 per cent): Heading into 2016, we considered Soto a top 40 catcher, but knee surgery limited him to 26 games. While active, however, he showed nice extra-base sock and seems to have continued that trend early on this year with two homers in his season debut and another one on Saturday. Grab him immediately in two-catcher formats.

Santiago Casilla, RP, Oakland Athletics (ESPN: 19.6 per cent; CBS: 28 per cent): It’s unclear who the A’s closer is, but right now Casilla seems to be the fave. He looks really steady early on, so whether Oakland is truly going with a closer by committee approach or not, we recommend Casilla for now.

Avisail Garcia, OF, Chicago White Sox (ESPN: 3.6 per cent; CBS: 12 per cent): Garcia had some injury issues last year, and while he rebounded slightly from 2015’s disaster, he again failed to live up to his promise. So far this season, he’s absolutely raking, batting .500 through four games.

Amir Garrett, SP, Cincinnati Reds (ESPN: 6.6 per cent; CBS: 30 per cent): Garrett pitched so well in his MLB debut on Friday, shutting out the Cardinals for six innings on just two hits. This kid has a chance to be great.

By RotoRob
Tags: Fantasy Baseball, Kevin Pillar, Toronto Blue Jays
This entry was posted on Sunday, April 9th, 2017 at 1:09 pm and is filed under BASEBALL, RotoRob, The Wire Troll. You can follow any responses to this entry through the RSS 2.0 feed. Both comments and pings are currently closed.