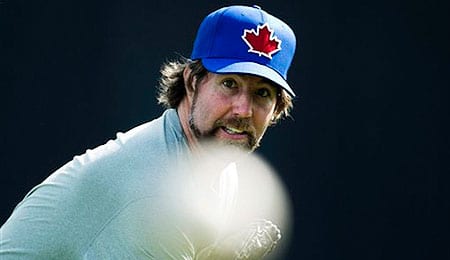 So how has Toronto managed to climb back into the race after a disappointing 19-23 start?

Surely offense has spurred the Jays’ 17-8 run, right? After all, this is a team that bashed its way into the postseason last year.

While the Jays’ attack has been middling so far in 2016, the rotation has taken a nice step forward and is suddenly the key to this team’s chances. It’s one of the more pleasant surprises in baseball through the first two months and change.

R.A. Dickey: Compared to 2014, Dickey was a bit more hittable, but had a slightly better home run rate. And let’s not forget how good he looks in the virtual world (see video below).

Drew Hutchison: Hutchison was pulled from the rotation down the stretch last year, so pitched much less despite a stellar record.

Aaron Sanchez/David Price: Sanchez began 2015 in the rotation but after getting hurt, he was transferred to relief. His ERA — not surprisingly — was up substantially from his brilliant rookie effort in 2014. Price was added at the trade deadline from Detroit as a rental and put up a phenomenal ERA in helping the Jays wrap up a playoff spot before he heading to Boston as a free agent.

R.A. Dickey: Dickey’s BAA has reached its highest point since he arrived in Toronto, but he remains one of the best knuckleballers in the business (not that there are many).

Marcus Stroman: Although he hasn’t pitched nearly as well as he did in his first two seasons, Stroman’s return to health this year has been huge. If he can get beyond his struggles, this rotation has a chance to be much, much better.

J.A. Happ: The Pirates pulled him off the scrap head last year and now that he’s landed in Toronto he’s pitching almost as well.

Aaron Sanchez: Sanchez is nearly at his career high in innings already, so Toronto plans to move him back to the bullpen soon to lessen the wear on his arm and provide a boost to a struggling relief corps. This could mean the return of Hutchison or the Jays could turn to Jesse Chavez or Gavin Floyd to fill the rotation slot.

Marco Estrada: Estrada is heading for a career high in innings as he’s not only improved on last year’s surprising performance, but is also developing into a workhorse.

So the key differences this year are a healthy Stroman, the addition of Happ and Estrada’s continued ascension.

But heading towards the second half, there are concerns:

Of course, there’s another possible outcome here: Toronto lands another big fish, a la Price last year, in an effort to consolidate the market gains it made in 2015 when the city really caught Jays fever for the first time in over two decades.

Now it’s your turn. Let us know in the comments below what your expectations are for the Toronto rotation for the remainder of 2016?

By RotoRob
Tags: Philadelphia Phillies, R.A. Dickey, Toronto Blue Jays
This entry was posted on Wednesday, June 15th, 2016 at 3:03 pm and is filed under BASEBALL, RotoRob, Team report. You can follow any responses to this entry through the RSS 2.0 feed. Both comments and pings are currently closed.