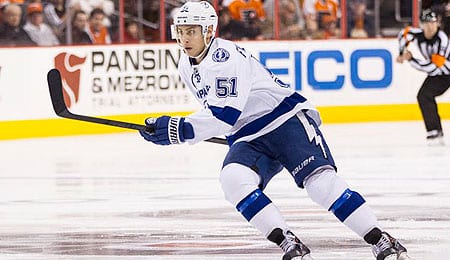 Valtteri Filppula is enjoying a nice bounce back season. (hfboards.hockeysfuture.com)

Welcome back to another week of Fantasy hockey! RotoRob.com NHL Editor Dakota Case is under the weather today, so the Troll duties are being handled by your site editor (sick of us yet this weekend?).

This week, Connor McDavid got his first of what should be many a hat trick; Coyotes farmhand Craig Cunningham collapsed on the ice before Saturday’s game with an undisclosed medical condition; and San Jose’s Tomas Hertl missed Saturday’s game, flying back to San Jose for an MRI. Check reports Monday for Hertl’s status going forward.

Valtteri Filppula, C, Tampa Bay Lightning (ESPN: 15.7 per cent; CBS: 21 per cent): When we slotted Filppula 125th in our Keeper League Rankings early in the 2014-15 campaign, we wondered if there was an upside in his game. Based on his play in the two seasons since, it seemed not, but he’s enjoying another renaissance so far in 2016-17, especially recently with four assists over the last three games (check out his beauty of a dime in the video below) and eight points over the last nine. Better yet, Filppula is back in the plus (+5) after going a combined -20 over the last two seasons.

Brandon Sutter, C, Vancouver Canucks (ESPN: 7.4 per cent; CBS: 12 per cent): Former Penguin Sutter had a rough first season on the left coast, as injuries pretty much decimated his campaign. Healthy this season, he’s making up for lost time, currently riding a four-game goal scoring streak. Sutter is seeing time on the Canucks’ top line with the Sedin twins, so needs to be immediately scooped up as he’s definitely taking advantage of his opportunity.

Cam Ward, G, Carolina Hurricanes (ESPN: 22.6 per cent; CBS: 41 per cent): Ward has been off the charts good this month, especially lately, with a shutout Tuesday and just three goals allowed over his last three games — all wins. He now has a winning record, and should easily shatter last season’s total of 23 wins. There’s a reason Ward has been one of the week’s hottest pickups, but there’s still time to jump on his train if you need netminding assistance.

David Perron, LW, St. Louis Blues (ESPN: 11.5 per cent; CBS: 30 per cent): Here’s a veteran winger that’s currently red hot, with two goals and four assists over the last four games. He’s not recording as many assists this season, but could threaten his career high in goals if he keeps lighting the lamp at this pace. On Saturday, Perron was bumped up to a top six role (playing 20:41 after seeing less than 15 and a half minutes the previous game), but note that could be a very temporary assignment. We suggest you monitor the line shuffling in St. Louis, but he could be a decent add even as a third liner given his productivity.

Radko Gudas, D, Philadelphia Flyers (ESPN: 20.4 per cent; CBS: 24 per cent): Everyone knows Gudas for his questionable hits (hence his six-game suspension to begin the season), but he’s playing a lot smarter this season (just one minor penalty) while also contributing on the scoreboard (two assists Thursday, three over the last five games. But the main reason he’s intriguing is the hits (tied for 11th despite the missed games) and blocks (tied for 13th). Seeking a boost in those cats? He’s your man. Plus Gudas added some PIM on Saturday the old fashioned way — five at a time, showing some serious toughness while delivering body blow after body blow to J.T. Brown.

Tyler Bozak, C, Toronto Maple Leafs (ESPN: 24 per cent; CBS: 33 per cent): Bozak enjoyed a four-helper night on Tuesday, giving him five assists over the last five games. He added a penalty on Saturday, and had accumulated nine points over six games before being held off the scoresheet the last two. Bozak has been playing with Mitch Marner and James Van Riemsdyk on what’s been arguably the Buds’ most potent line. After being held to 35 points in an injury-plagued season in 2015-16, Bozak in on pace to match his career high in goals and shatter his personal best in points.

Mike Condon, G, Ottawa Senators (ESPN: 9.7 per cent; CBS: 17 per cent): Yes, it may seem strange to recommend a backup goalie that just took a serious shellacking on Thursday. But Condon’s job security looks good given his previous play and the fact that Andrew Hammond seems to have fallen out of favour in Ottawa and may soon be dispatched to another team. Plus you know that starter Craig Anderson is dealing with some personal issues that will likely have him leave the team again at some point, making Condon all the more attractive. There’s a reason the Sens made a deal with Pittsburgh to acquire Condon a couple of weeks ago. And if Anderson’s performance slips at all, Condon has been known to swoop in and receive more PT than anticipated.

By RotoRob
Tags: Arizona Coyotes, Connor McDavid, Craig Cunningham, Fantasy Hockey, San Jose Sharks, Tampa Bay Lightning, Valtteri Filppula
This entry was posted on Sunday, November 20th, 2016 at 5:23 pm and is filed under HOCKEY, RotoRob, The Wire Troll. You can follow any responses to this entry through the RSS 2.0 feed. Both comments and pings are currently closed.