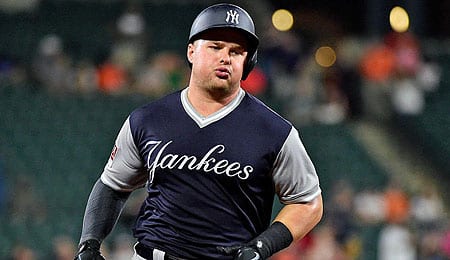 Luke Voit was a Fantasy beast down the stretch. (CBS Sports)

The 2018 Fantasy baseball season is now in the books, and here’s hoping you had a heroic campaign and that our waiver wire picks played a role in that.

Oh sure, we had plenty of misses among our picks, and because of the weekly nature of our column it means that some hot free agents get scooped up days before we can tout them. Given the way Fantasy baseball leagues tend to operate, we also use the second half of the season as a time to tout more dynasty league options. But the fact is that if you managed to wind up with, say, three or four of these guys on your team, chances are you were a pretty happy camper this season.

Francisco Cervelli, Pittsburgh Pirates (Week Two): After two straight years of decline, Cervelli is enjoying a renaissance season. In flashing his best full-season extra base pop ever, he’s combined with Elias Diaz to give the Pirates a pair of double-digit dinger catchers for just the second time in club history. Although it’s a small part of his game, and he’s not particularly good at it, Cervelli even ran more this season, while posting his highest WAR since his debut in Pittsburgh in 2015. We recommended him very early in the season, but really, he remained a solid waiver wire add well into the summer, enjoying a productive August before his BA slipped this month.

Luke Voit, New York Yankees (Week 23): Voit emerged as a great late-season find for Fantasy owners, slugging .600 in August and taking it up a notch this month with 13 homers so far — tops in the entire majors. His full-season projections work out to 68 homers and 188 RBI. What??? Voit’s doubles have turned into homers this season, and while he has zero speed, he’s proven a great asset in OBP leagues as well, getting on base at a .395 clip. He’s clearly having the time of his life in pinstripes (see video below).

Lourdes Gurriel Jr., 2B/SS, Toronto Blue Jays (Week 17): Gurriel proved to be a wise add in the second half, showing some impressive power and looking as hot as anyone in the majors in July despite dealing with a pair of injuries. The rust showed in August, but he’s bounced back with a decent effort down the stretch. Signed as an undrafted free agent by the Jays out of Cuba in 2016, Gurriel has been extremely productive as a pro and he made great strides in addressing his BA issues this season. In less than half a season, he’s accumulated some impressive counting cat numbers and has put himself on the map as an excellent option at the keystone corner for 2019.

Adalberto Mondesi, Kansas City Royals (Week 24): Mondesi was an unbelievable late-season find for Fantasy owners needing a boost, especially in the stolen base department. His season got off to a late start because of a shoulder woe, and he struggled upon his return in June. From there, Mondesi was money. He swiped five bags and hit .310 in July, stole 10 bases while slugging .486 in August and has put up a season-best 884 OPS so far this month, with another dozen thefts. In less than half a season, he’s hit better than ever while stealing 30 bases to establish himself as a core piece of the Royal rebuild. Now just imagine how good Mondesi would be if he could draw a walk.

Johan Camargo, Atlanta Braves (Week 14): Camargo began the season on the DL, but early in the second half he made for a fine target after driving in 20 runs in June and then following that up with five homers and an 820 OPS in July. That earned him more PT in August and he delivered an even stronger performance before cooling a tad down the stretch. This 24-year-old Panamanian hasn’t hit quite as well as he did in a half season last year, but has more than made up for it with improved power and a much better walk rate.

Note that there weren’t many solid redraft league outfield options available on the wire this season… or at least that many that caught our attention. However, Eloy Jimenez, especially, and to a lesser extent, Drew Waters, look like nice dynasty options we nailed early on.

Harrison Bader, St. Louis Cardinals (Week 14): Although he spent most of his time batting seventh, Bader showed signs of being a potential leadoff man of the future, putting up a .364 OBP in his limited chances in the role. He’s unafraid to get plunked in order to get on, and once there, showed an ability to steal bases. Bader also flashed nice extra-base sock, and looks like a future 20-20 threat given enough PT. He was the team’s No. 5 prospect heading into the season and got an early call thanks to Gyorko’s injury. The fact that Bader was never sent back to Triple-A speaks volumes. This kid can play.

Mike Fiers, Detroit Tigers/Oakland Athletics (Week Four): Fiers’ first relief appearance of the season was one to forget, but he enjoyed a great bounce back season after his disastrous 2017 campaign. He made 30 starts for the second time in his career, setting a career high in wins along the way. Fiers improved his home run rate in Detroit, and proved tougher to hit after the trade to the A’s.

Trevor Williams, Pittsburgh Pirates (Week One): The 2018 Steve Blass Award winner as the top Pirate pitcher, Williams morphed into more of a workhorse while doing a better job of keeping the ball in the yard. Williams’ control keeps getting better, leading to an improved record and better bottom line results. His K rate has diminished two years running now, and that’s holding him back from being a must-own Fantasy asset, but there may be upside here yet.

Nick Pivetta, Philadelphia Phillies (Week One): Pivetta got off to a great start, but generally struggled from June on (except for a solid August showing). We assume he was tiring down the stretch, unable to last beyond five innings after August 25. Still, it was solid progress for the sophomore, and Pivetta improved his WHIP into a far more palatable figure.

Joey Lucchesi, San Diego Padres (Week One): An early-season revelation, Lucchesi enjoyed a pretty solid year as long as you sat him against the Snakes (0-5, 6.85 ERA in five starts). The southpaw alternated good months with bad months, but that’s a rookie for you. Still, other than six weeks spent on the DL or in the minors, he lasted all season in the Padre rotation and turned in a positive performance. Lucchesi was particularly tough on lefties, limiting them to four extra-base hits in 111 at-bats.

A couple of our relievers finished the season in the rotation, but given that they earned RP qualification, they wound up likely more valuable being slotted there.

Austin Gomber, RP/SP, St. Louis Cardinals (Week 18): Gomber was a fine second-half addition, and could have been even better if the Cards weren’t trying to shelter his young arm to an extent. Still, he had a solid strikeout rate even if he did struggle in his rotation time over the last few weeks. But we’ll always have August, when Gomber combined with fellow rookie Jack Flaherty to record a 1.77 ERA as the Cards went 11-0 with this pair starting.

Tyler Glasnow, RP/SP, Tampa Bay Rays (Week 18): Another young arm that began the season in the bullpen before moving to the rotation, Glasnow was inconsistent down the stretch, and had a couple of substandard showings in his final two starts, but he continued to rack up the Ks, with 21 over his last three starts combined. Still, despite going winless, he was superb in six August starts, limiting opponents to a .155 BAA. Overall, Glasnow saw more action than ever, improving his ERA significantly thanks to a sharp reduction in his homer rate — especially with the Pirates. The dingers were more of an issue when he moved into the rotation after getting dealt to the Rays, but he compensated for that with a much better WHIP. Serious 2019 sleeper alert here, folks.

Kirby Yates, San Diego Padres (Week 16): When we recommended Yates in late-July, it was because he was in line to take over the closing duties for the Padres in the wake of Brad Hand getting dealt. Sure enough, Yates racked up plenty of saves in the second half, although he had his share of struggles in July and August before settling in with a big September. Overall, he was nearly unhittable this season and enjoyed career bests in wins, saves, strikeouts, ERA and WHIP.

Electric Light Orchestra was one of the top progressive pop acts of the ’70s. You couldn’t have lived through that decade without being touched in some way by this British band, who sold over 50 million records worldwide. In 1976, ELO released its sixth album, A New World Record, which included four singles, the first of which is “Livin’ Thing.”

Now it’s your turn. In the comments below, let us know which waiver wire gems made the biggest difference for you in 2018.