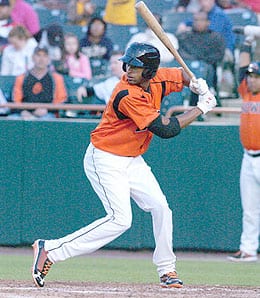 Henry Urrutia has a chance to shine this year. (Bill Vaughan, Bowie Baysox )

By RotoRob and Josh Johnson

The 2014 RotoRob MLB Draft Kit continues today with yet another cheat sheet. So while you wonder whether Chris Davis was in fact offered a multi-year contract extension by the O’s, let’s have a look at the top seven designated hitters.

Gone are the days of the fabulous Edgar Martinez and the walk or whiff ways of Jack Cust. Many big league teams now use the designated hitter position as a day of rest for their everyday players. There are few David Ortizs left, as the game has somewhat evolved from paying loads of money to a guy that doesn’t own a fielding glove. With apologies to Don Baylor and the latter days of Jim Thome’s career, we now present to you our very small DH rankings for the 2014 season. — JJ

Last year’s ranking are in parentheses.

1. David Ortiz, Boston Red Sox (1): As incredible as Ortiz’s numbers were in the World Series, just imagine if he hadn’t been robbed of a Grand Salami in Game One. Adding another ring capped a season in which he wasn’t quite as dominant as 2012, but he stayed healthy enough to make 600 PAs. Ortiz reached 160 hits for the sixth time in his career (topping 2,000 career in the process), and pounded at least 30 homers for the seventh time, pulling within shouting distance of 450. His OBP wasn’t as great as it was it 2012, but it was still freaking impressive. Now he’s entering his walk year and insinuating that he’ll leave if he doesn’t get a multi-year deal, but would locking him up for multi-years be the wisest thing for Boston to do? After all, Big Papi did turn 38 this offseason. Of course, this isn’t the first time he said he’d leave Boston. Just over 11 years ago, Boston signed Ortiz after the Twins released him, and that’s definitely a move that has changed the course of both franchises. Big Papi remains a fiery and passionate competitor, as you can see in the video below.

2. Billy Butler, Kansas City Royals (6 at 1B): As we discussed in July, Butler looked like he was emerging as a major power hitter in 2012, but crashed and burned last year. And now KC may have to deal him away to trim payroll when he’s not exactly at his highest value, coming off a 2013 when his home run output almost dropped in half and his extra-base pop plummeted in a huge way. Butler’s never had much speed, but he didn’t even attempt a single steal as his overall value really declined. He’s still an integral part of the Royals, but the fact that he can’t field or run limits his value. If Butler’s wOBA doesn’t bounce back this year, we’re going to seriously doubt that he’ll ever fully live up to his promise. At least Butler was first base eligible in 2013; after making just seven appearances there in 2013, however, he’s back to DH-only eligibility. Yuck!

3. Victor Martinez, Detroit Tigers (2): An honourable mention as the 2013 RotoRob Fantasy Baseball Comeback Player of the Year after missing all of 2012, Martinez could be on his way out of Motown soon considering how many Tigers earn eight-digit salaries. Last year, he set a career high in at-bats, however, his on-base percentage dipped. Never a source for speed, V-Mart’s slugging also took a 40-point tumble. He says he’d like to stick around in Detroit, but there just may be too much talent on this roster to make it fly financially. Martinez caught three games last year, so check your league’s eligibility rules; if he qualifies there, his value skyrockets. But otherwise, we worry about a wOBA that was 20 points below his career average last year.

4. Henry Urrutia, Baltimore Orioles (NR): Urriata, who caught our eye in the AFL last year, made his big league in 2013, but the Cuban’s counting cats left something to be desired over 24 games. The Cuban showed almost no extra-base power, no patience and no speed. Still, he’s considered a possible X factor for the O’s this year given that he’s going to get a crack at the starting LF gig. Urrutia turns 27 in a couple of weeks, but it’s hard to ignore the .365 BA he put up in Double-A last year. While he’ll need to make better contact in bigs to make an impact, Urrutia is definitely intriguing, but we’d like to see more power before fully jumping on his train.

5. Jason Giambi, Cleveland Indians (NR): In a Podcast last February, we wondered why the Indians signed Giambi. The admitted ‘roids user is clearly on a very steep decline, although his extra-base pop actually was much better last year. Of course, he’s never had speed, so how would we notice if he was slowing down? Still, he did hit that magical homer to help the Indians make the playoffs. If for no other reason, The Tribe got value out of this deal. After the season, the Indians rewarded him with a minor league deal, giving him a chance to continue his career, now 16 games shy of 2,250. Okay, Giambi was a bit better last year, but remains a below average hitter. It’s time for him to be fitted for an ice floe. It’s the humane things to do.

6. Danny Valencia, Kansas City Royals (NR): It’s been a couple of years since we recommended Valencia for Fantasy purposes, and that wasn’t a good call even then. He somewhat resurrected his career last year as part of the revolving door that was the DH scene in Baltimore. Of course, once upon a time, he was part of the revolving door 3B situation in Minnesota. Valencia scored a decent amount of runs, although what minimal speed he had has disappeared the last couple of years. He got on base at a respectable clip, and now that he’s in KC (acquired in a trade this winter for David Lough), he’s likely to regain third base eligibility early on with Butler handling most of the DH duties for the Royals. Valencia spent most of last season at Triple-A, and scored a ton of runs, and it will be interesting to see if his presence can light a fire under the traditionally underperforming Mike Moustakas.

7. Travis Hafner, Free agent (5): Early last season, we recommended Hafner as a waiver wire pick, but unfortunately his fast start quickly faded and he got worse and worse as the season progressed. Considering Hafner has been in free fall for four years and is now 36, the time has come to think about pulling the plug here. He’s definitely thinking about it, joining the Notre Dame coaching staff, but saying he plans to play on. Hafner is a smart dude — a former high school valedictorian, in fact — so he knows that his time is almost done. Sure, that .240 BABIP has to improve — there’s no way Hafner is a .200 hitter, but how much does he realistically have left after all the injuries?

Crave more in-depth Fantasy analysis? Then join us every Thursday at 9 p.m. EST for RotoRob’s Fantasy Baseball Weekly Podcast on Blogtalkradio.Tim McLeod and I will entertain and edify you for a half hour or more each week. Tune in here.

Can you believe it? It’s that time of year again, when all good RotoRob readers must dust off their monkey suits and sequined gowns as we hand out our annual hardware in the form of the RotoRob Awards. For each sport, we identify a Stud, Dud, Rookie and Comeback Player of the Year and then it’s fun time, with our unique crazy ass trophies — most of which are awards players would rather not win. But hey, we’re always watching, so you best be careful what you do in public.