Can you believe it? It’s that time of year again, when all good RotoRob readers must dust off their monkey suits and sequined gowns as we hand out our annual hardware in the form of the RotoRob Awards. For each sport, we identify a Stud, Dud, Rookie and Comeback Player of the Year and then it’s fun time, with our unique crazy ass trophies — most of which are awards players would rather not win. But hey, we’re always watching, so you best be careful what you do in public.

We’re going to kick things off with the 2013 RotoRob Baseball Awards.

Chris Davis sure paid dividends for his owners in 2013. (mlbreports.com)

Miguel Cabrera or Mike Trout? It’s hard to deny either of these two great players the Fantasy Stud of the Year, but for 2013 we’re going to look to the land of the crab cakes and make Baltimore Orioles first baseman Chris Davis our choice. You got what you paid for in both Trout and Cabrera, but you procured a monster if you bought into Davis in the middle rounds in 2013. Davis’ 53 homers and 138 RBI were good enough to secure two-thirds of the Triple Crown last season and — relative to his draft slot — his numbers were simply off the charts. He led many a Fantasy squad to the promised land. — TM 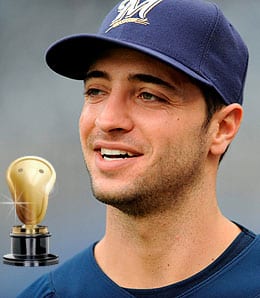 Ryan Braun is no longer part of the Big Three. (Statement-analysis.blogspot.com)

The big three heading into 2013 were Mike Trout, Miguel Cabrera and… Ryan Braun. Which one of those doesn’t belong now? Let’s ignore the obvious for a minute and just delve into the numbers. Braun was a Top three pick and rewarded us with nine homers, four stolen bases and 38 RBI before having to serve his PED suspension commencing July 22. You paid for a first rounder and barely got a bench player. Those numbers aren’t going to cut it under any circumstances. Braun threw everyone and everything under the bus including many a Fantasy squad and is most deserving of the Fantasy Dud of the Year horns. — TM 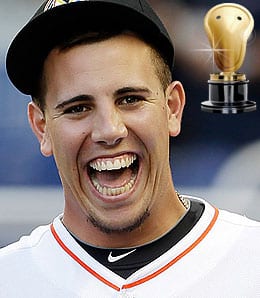 Jose Fernandez gave Marlins’ fans something to smile about. (Cespedesfamilybarbecue.com)

Not much went right for the Marlins last season. One thing that did, however, was the emergence of ace Jose Fernandez. Just 21 years old, he was absolutely dominant after a forgettable April. In fact, over the final five months, the rookie went 12-4 with a 1.82 ERA, a 0.93 WHIP and 164 strikeouts in just under 150 innings pitched. Despite the small sample size, it’d be well within reason to draft Fernandez among the top 10 starters for 2014. — HG 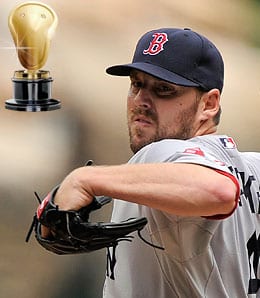 Remember when John Lackey was a top of the rotation starter with the Angels? Remember when he netted that five-year, $82.5-million contract with the Red Sox following the 2010 season? Now try to remember anything significant Lackey did for the BoSox prior to the 2013 season. You can’t! Prior to 2013, Lackey had a hard time finding the field thanks to injuries and when he did manage to step onto the mound, boy did he struggle. During his first two seasons with the Red Sox (he missed all of 2012), Lackey was 26-23 with a 5.26 ERA and a substandard (for him) 6.3 K/9 over that time. Fast forward to 2013 and it looks like the Red Sox finally got some of their money’s worth for the pitcher. While his 10-13 record doesn’t do him justice, he posted a 3.52 ERA with a 161 strikeouts (7.7 K/9) over 189.1 innings of work — an effort that deserves our Fantasy Comeback Player of the Year award. — JW

The Most Valuable Performer Award 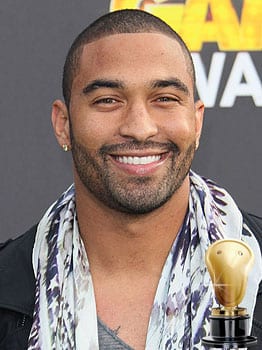 Matt Kemp continues to star — off the field. (Mzshyneka.com)

After being robbed by Ryan Braun in 2011, Matt Kemp is still without an MVP award, and things haven’t gone so well for him since as he lost 80 points of OPS and missed a third of the season in 2012 with injuries and then lost over half of 2013 for health reasons as his numbers kept plummeting. But the time off afforded him the opportunity to show up on Sesame Street, where he earned our Most Valuable Performer Award for explaining what the word “attach” means. Let’s just hope Kemp’s body stays attached in 2014, so he can finally earn himself that real MVP award he’s been dreaming of. Hell, we’d give him the MVP for having the guts to wear that jersey with all the penguin stickers on it! — RR 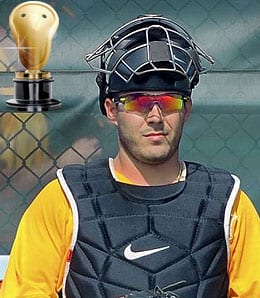 No one is immune from Tony Sanchez’s bite — even his mom. (Peter Diana/Post-Gazette)

If you’ve been following the career of Pirate catching prospect Tony Sanchez, then you likely know that he’s quite the Twitter star — to the point that his outlandish behaviour has periodically gotten him in trouble with the organization. Hey, the dude has an awesome sense of humour and frankly, we could use more colour in the game, so we applaud Sanchez. One of his classics this year involved being confused for LHP Jonathan Sanchez by the Pittsburgh Post Gazette, which used Tony’s image in a story about Jonathan being suspended.

Tony, being the kind of guy he is, seized the opportunity to punk his mom:

If you're gonna provide the material, I'm going to punk my mother. Standard procedure. pic.twitter.com/3O82Gcgh32

Sanchez is going to be one colourful catcher in the spirit of A.J. Pierzynski (although, ideally, he’ll be less hated). — RR 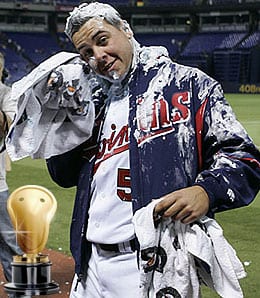 Over the years, players have gotten injured off the field in all sorts of stupid ways, but Twins reliever Anthony Swarzak took the cake this year after suffering two fractured ribs in late-January at TwinsFest. Apparently, he was playing around and wrestling with someone when he busted the ribs. Swarzak only wound up missing five games of the season, but what an idiot. At a team function, he helps set the team back by horsing around. No word on who he was horsing around with, but it better have been a team of cheerleaders and it better have involved whipped cream. Just sayin… — RR 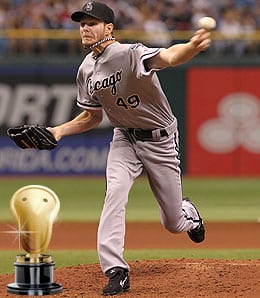 Despite his efforts, Chris Sale remains a skinny mofo. (US Presswire/Kim Klement)

White Sox ace Chris Sale is a literal beanpole at 6’6″, 180 pounds and his slight build is a concern to both him and the White Sox, who want to ensure that he has the stamina to pitch deep into games and to log 200 IP a season. But it’s not as if Sale isn’t trying to beef up. Just the fifth major leaguer in history to be listed at 6’6″ or taller and 180 pounds or lighter, he recently ate two ice cream sundaes and approximately 30 bags of potato chips — on a four-hour flight. But Sale’s All-Star calibre metabolism refuses to allow him to gain any weight. Even his 285-pound teammate Adam Dunn is in awe of how much Sale can consume, and one look at Dunn will tell you he knows his way around the buffet table. — RR

Game-Saving Play of the Year 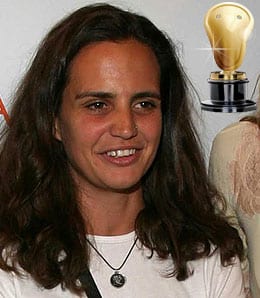 Sorry, this award does not go to the outfielder that leaped over the wall to rob the home run or the shortstop that turned that brilliant double-play to pull out the win. This play actually occurred off the field in June when Cristina Torre, daughter of former Yankee manager Joe Torre, caught a baby that fell out of a second story window in Brooklyn. Seriously. Even we can’t make this shit up. The baby boy had fallen off the second-floor fire escape and was dangling from the awning of a froyo shop. Torre spotted what happened and raced into action, and was there to snag the tot when he fell. Man, that’s a serious Gold Glove play — the Yankees might need some of that next season. — RR 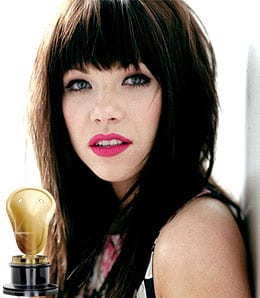 Call Me Disgusted when I saw Carly Rae Jepsen try to pitch. (Last.fm)

Over the years, plenty of celebrities have absolutely butchered their first pitch honours, but rarely have we ever witnessed anything as bad as the one attempted in Tampa Bay by Canadian pop singer Carly Rae Jepsen of “Call Me Maybe” fame. Jepsen looks quite fine in her cute little shorts, but the rest of these visuals will make you cringe as the toss flies out of her hand directly into the ground, about two feet in front of the pitcher’s mound, before rolling to a stop off a cameraman’s boot, as you can see in the video below. I’d definitely — nothing maybe about it — get the bullpen going, Joe. — RR

Unfriendliest Mascot of the Year 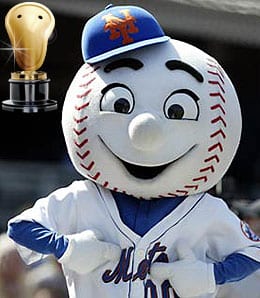 Mr. Met smiles a lot, but behind the grin, he hates his own fans. (mrmetbro.blogspot.com)

What’s worse than being a fan of a really crappy team? How about getting blown off by your own team’s mascot? Well, that’s exactly what happened to a New York Mets fan at a game in late-July when Mr. Met gave her the cold shoulder when she wanted to get her picture taken with him. What a douchebag! Dissing his own team’s fans because he’s too cool to stop and rub elbows with the common folk. And there you have it: Reason No. 89 why the Mets have struggled through five straight losing seasons. — RR

Tirade of the Year 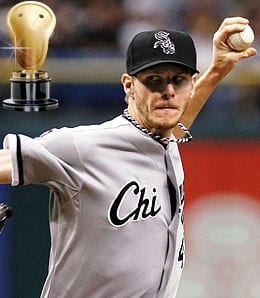 Chris Sale not only takes the cake for the best metabolism in the game (see above), but he also earned hardware for a fantastic shit fit he threw that was all caught on camera. In late-August, the White Sox ace endured one of his worst starts of the year and, after bitch-slapping his glove, he took it out on a defenseless little cooler that was probably used to carry juice boxes for the team. Come on, Chris, you’re never going to gain any weight by expending that much energy between innings. — RR 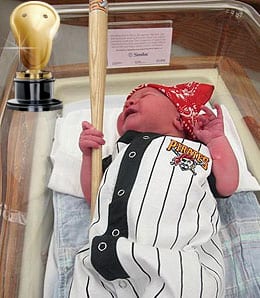 Is it safe for a baby to have a bat? (St. Clair Hospital)

When a baseball team’s performance can excite — and even inspire — a community, it can transcend the sport and really add something to the world. And when the Pirates finally ended their 20-year losing drought and took it a step further by making it to the playoffs in 2013, the city’s reaction to the team was something very special indeed. The most brilliant example we saw came from St. Clair Hospital in the Steel City, which showed its support during the Pirates’ playoff run by dressing all the babies in the maternity ward in little Pirate gear. Argh, matey! Now there’s a darn cute sight! — RR 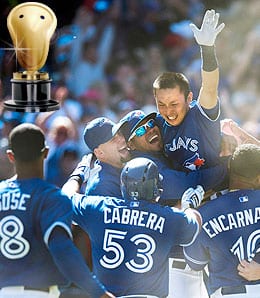 Everyone fell in love with Munenori Kawasaki. (Thereviewsarein.wordpress.com)

“Thank you very much. My name is Munenori Kawasaki. I come from Japan. I am Japaneeeeese.” That one quote was the highlight of the Jays’ 2013 season. Whether it was sneaking into the scrum as a reporter, playing catch with the fans, or demonstrating his dance moves, Munenori Kawasaki reminded us that our great game should be fun and in the process captured the hearts of not only the Blue Jay faithful, but fans everywhere. — TM

Now it’s your turn. Let us know in the comments below what you think of our 2013 awards. Would you have picked differently?

By RotoRob
Tags: Baltimore Orioles, Chris Davis
This entry was posted on Sunday, December 29th, 2013 at 10:04 pm and is filed under BASEBALL, Herija Green, Jake Watroba, RotoRob, RotoRob Awards, Tim McLeod. You can follow any responses to this entry through the RSS 2.0 feed. Both comments and pings are currently closed.