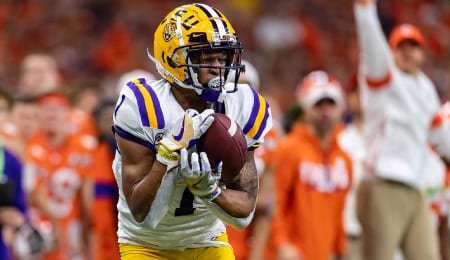 Ja’Marr Chase should be the first wide receiver off the board. (Touchdown Wire-USA Today)

Outside of LSU’s Ja’Marr Chase, it is hard to imagine a drier draft year for wide receivers than 2021. NFL teams should approach this year’s draft looking to add value receivers to their core pass-catchers. Teams like the New York Giants and the Green Bay Packers are in a great position to find fits for their offense, while teams like the Detroit Lions or Cincinnati Bengals that lack a true alpha receiver will have a difficult time in this WR-starved draft.

Chase broke out in 2019, snagging 84 receptions for 1,780 yards and 20 touchdowns (see video below for some of his highlights) and then wisely opted out of the 2020 season to prepare for the 2021 NFL Draft. Arguably the top receiver on every team’s board, he mugged opposing CBs up and down the field, outside of the numbers. Chase caught slants over the middle, screens and deep shots, so he should rightfully be compared to Andre Johnson.

The Bengals need an outside receiver after shipping A.J. Green to the Cardinals, so they’re expected to make a push for Chase at former teammate Joe Burrow‘s behest. Cincinnati threw more times than any other team last year thanks to negative game script, which favours Chase’s Fantasy production. If he remains healthy, expect 75+ catches and 1,000+ yards in his rookie campaign.

Smith burst onto the scene in 2019 with 68 receptions for 1,256 yards and 14 touchdowns, and then managed to top his video game-like numbers last year by hauling in 117 catches for 1,856 yards and 23 touchdowns. By last July, we identified him as a future NFL talent. Smith is a natural ball hawk with smooth route-running and seamless hips, Smith should draw comparisons to Robby Anderson — incredibly light and fast and able to out elevate other defense backs. The one knock on Smith is his weight.

The Dolphins sorely need a WR1 that can make contested catches and create separation for his quarterback. While Smith boasts exceptional receiving abilities, we are doubtful about his WR1 role on Miami and whether he will be able to ward off aggressive DBs at his self-proclaimed weight (170 pounds).

A consensus projected first round pick, Toney should be a plug-and-play slot receiver in the NFL, and his dangerous open field playmaking ability makes him a viable returner as well. He has a solid enough build to pick up yards after contact and should be thought of as a faster Jamison Crowder. Though unpolished in his route-running, Toney will be a premium slot receiver fit for any needy team.

The Larry Fitzgerald era is over, so we believe the Cardinals will invest in a better WR3/slot option than Andy Isabella and this is when Toney’s fresh wheels will shine. If Toney plays alongside Green and DeAndre Hopkins, expect him to put up 60+ catches and 600+ yards in a solid but not great rookie season.

Remember pre-crazy Antonio Brown when he was just becoming a household name? Imagine a player that mimics his timing, vision and route-running coming out of college. Moore is that player, blending dangerous open field elusiveness with breakneck game speed. Even though he played in an inflated aerial offense under Lane Kiffin, Moore should not be pigeon-holed to just playing in the slot and should be moved around the offense like a true WR1.

The Packers need some receiver depth and drafting Moore would provide a dynamic target for Aaron Rodgers. Dating back to the Brett Favre days, Green Bay has always churned out top Fantasy receivers, albeit after some development. The West Coast offense under HC Matt LaFleur is just a less aggressive version of the one Moore was in at Ole Miss, so he should fit in comfortably.

After Chase opted out of the 2020 season, Marshall filled in admirably before also opting out of the last portion of the year. With good size, length, deep speed and mismatch abilities, Marshall projects as a Marvin Jones-type with similar lack of first step explosiveness as a vertical threat. Marshall has impressive measurables and football talent, however, we believe he’s a huge red flag because of his character issues. He’s susceptible to laziness, arrogance and vanity.

If Marshall winds up on Detroit, the current receivers on the Lions’ depth chart include Tyrell Williams, Danny Amendola and Mohamed Sanu. As a result, Marshall would be the vertical threat in a Jared Goff-led offense, which is a less-than-ideal situation considering Goff’s struggles to compete deep passes. As a result, we believe Marshall will have a tough time topping 750 yards in his rookie campaign.

Celia Cruz was one of the 20th century’s most popular Latin artists. Here’s another track from her 2001 album Siempre Vivire, “Quitate de Ahi.”

An enviable talent to be heading the Rays’ system, Franco still hasn’t been tested above High-A ball thanks to there being no minor league season last year. However, this kid is an elite contact hitter with elite BA skills. There really isn’t a clear weakness in Franco’s game, although it would be nice to see his base stealing skills improve as he’s just 22-for-39 in his minor league career to date.

Lawrence enjoyed arguably his best season in 2020, coming up just short of a national title while completing 69.2 per cent of his 334 attempts for 3,153 yards with 24 touchdowns and five interceptions — outpacing his 2019 efficiency by throwing for 0.4 yards per attempt more and tossing fewer interceptions. His skill set screams for an RPO spread/vertical offense featuring both the arm and legs of the quarterback, pre-snap and post-snap. Assuming he lands Lawrence lands in Jacksonville, we are skeptical the Jags will optimize the talent they’re given as the organization loves shooting themselves in the foot by running the ball. Because he needed labrum surgery on his non-throwing shoulder, he moved his pro day back to February 12, so now has seven months to recover.