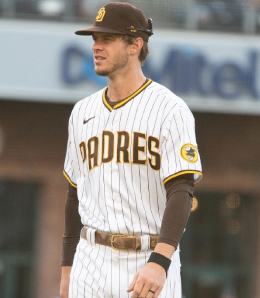 When we last checked in on Wil Myers, his superb performance was perhaps the highlight of the 2020 season for the Padres.

Unfortunately, things went downhill for him last year (see video below for an example of his struggles); not quite as bad as he was in 2019, but nowhere near as good as he showed us in 2020.

As we noted, 2021 was not a banner year for Myers by any stretch of the imagination. Really, the only good news was that he flirted with double digit steals after nearly falling off the map in that regard the previous season. However, that increase in swipes came with a cavaet as Myers struggled on the basepaths (8-for-13), and he’s clearly not the same dude that swiped 28 bags in 2016 — after which we put him under the microscope — and another 20 the following year.

The decline in his running game is a shame, as he’s somehow managed to climb to 13th place among the Padres’ all-time leaders in steals. While the top three are likely unreachable unless he starts swiping bags like he did in 2016 and 2017, Bip Roberts in fourth place is just 56 ahead, so who knows? Speaking of Roberts, here’s some sound financial advice from him.

But even more surprising is the fact that Myers is currently in seventh place in homers — just 36 shy of matching the franchise record. Considering he was on pace to slug 44 dingers in 2020, this record is not completely safe this season. Myers as the all-time leader in homers for San Diego? We’re not sure if this says amazing things about him or is an indictment of the Padres’ inability to develop and retain power hitters over the years.

Still, Myers turned 31 in December and wasn’t even a top 200 player last year. So how bullish are we on his prospects going forward?

Well, for starters, you can massively drop him down your outfield rankings from where he was a year ago to around the 85-90 range, perhaps top 75 if we’re feeling generous. Injuries have been a factor in his regression, but even considering this, he’s still a 20-homer, 10-steal threat, and that has value.

Consider him a low-end starter, but one capable of being plugged in during hot streaks (like in July, when he scored 10 runs and drove in 16, or in August, when he batted .294 and drew 10 walks).

We think you can reasonably expect Myers to hit around .250, top 20 homers and steal close to double-digit bags. But there are serious red flags to consider here, namely a barrel rate that plummeted last season, raising questions about how seriously we should take his superb performance in the Covid-shortened 2020 campaign.

At the end of the day, the track record is there: seven times in his nine-year career, Myers has posted an wRC+ of 107 or higher, meaning he’s nearly always recording better than average seasons offensively. He’s not a 30-30 threat (or even 25-25) anymore, but that doesn’t mean he doesn’t have excellent value in deep leagues and is a legitimate bench asset in virtually all formats.

Robert Dwayne Womack, better known as Bobby Womack, was an American R&B singer active from 1952 until his death in 2014. He was responsible for some of the greatest Blaxploitation soundtracks ever, including the seminal Across 110th Street. This album featured “Hang on in There,” performed by Bobby Womack and Peace.

By RotoRob
This entry was posted on Wednesday, February 9th, 2022 at 6:38 pm and is filed under BASEBALL, Player profile, RotoRob, Scouting Report. You can follow any responses to this entry through the RSS 2.0 feed. Both comments and pings are currently closed.