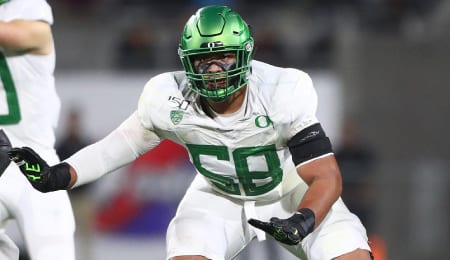 Penei Sewell has a bright NFL future ahead of him. (Mark J. Rebilas-USA Today Sports)

As we wrap up our 2021 NFL Draft Preview, at this point, it’s pretty obvious that Trevor Lawrence will be going first overall. In fact, we checked out some of the online sites via Sportsbettingdime to see if the sportsbooks show something different, but they agree. There is no other player that comes close, according to the odds listed.

With this in mind, it’s time to review this year’s class of offensive linemen.

Sewell is a refined tackle that is ideal for outside zone schemes. Faster than quick, he often gets off the snap cleanly, using his above-average explosiveness to position his hips and shoulders square to the defender. A violent reach-blocker, Sewell attacks the defensive line, setting and re-setting his feet quickly. He possesses incredibly high football IQ, with the ability to diagnose a play before, during and after the snap. Amazingly, there is still room for improvement in his short area quickness.

At the pro level, Sewell will need to be more aware of his foot placement as he has shown that he will overcompensate for an outside speed rush. Still, he’s a clear top 10 pick.

Sewell will present almost a boring upgrade at either tackle position if he winds up with the Bengals or Falcons. We believe he is a better fit with run-heavy Atlanta and its outside zone scheme with Mike Davis, but some experts suggest that Sewell is exactly what the Bengals need (see video below).

Slater is an athletic specimen. Under sized and under weight, he had to prove the hard way he was right for the tackle position… and boy was he ever. In Slater’s matchup against Chase Young, he showed elite footwork, setting and re-setting his feet to erase last year’s second overall pick. Slater shows experience with his hand placements, locking them onto defense linemen’s chest plates. However, given his elite short-area quickness, we expected him to be more explosive at the snap. Slater does have one bad habit, tending to prioritize anchoring deep against bull rushes. Power to speed rushes will give him trouble.

Slater will have the most optimal opportunity his athleticism in Carolina, leading Christian McCaffrey on outside zone runs and screen plays. If Slater is drafted by Dallas he’ll add to the mobility of the Cowboys’ offensive line, a stark contrast from recent years. He’d definitely be a welcomed upgrade for Ezekiel Elliot and the Dallas receiving core.

Davis is almost disappointment as a prospect. Despite telling the media his knee was fine, he did not turn out for most pro day events, opting only to do the bench press. On tape, however, Davis is downright violent in the trenches and a great run blocker, able to get into the second level quicker than his first step would indicate. He moves well along the line and is very experienced at sliding protection. Davis, who is well suited for a true pocket passer rather than a mobile quarterback, prefers to stick onto pass rushers than to attack them because of his arm length.

Like most linemen, he needs improve his recognition of post-snap blitzes. Davis’ first step leaves a lot to be desired and he tends to undershoot gaps, misjudging his own speed and angles sometimes.

Buffalo and Miami are totally opposite teams needing the same kind of interior help. The Bills have a pass-first, inside zone run offense and Davis is the perfect blend of violent stickiness. If drafted by Miami, he is likely to run block more while holding the line for Tua Tagovailoa.

Jenkins is the most violent right tackle in the draft. In addition to having an incredibly explosive first step, he has a very solid base and sticks onto defenders. Jenkins takes great angles against opponents, getting to the second level in a flash. Preferring to guard high defenders, his blocking and positioning on screen plays will need improvement.

Speed rushes, one-armed stabs or anything that throws Jenkins’ upper body out of sync with his lower body will likely be effective on him. His tendency of baiting edge rushers won’t fly in the NFL.

Kansas City sorely needs help at the tackle position after releasing Eric Fisher and Mitchell Schwartz. And it’s clear after the Chiefs traded for guards Joe Thuney and Kyle Long that the team believes it can solve its tackle issues through this bountiful draft class.

Washington will need to beef up its offensive line for Ryan Fitzpatrick. While it is more likely to seek help inside, adding Jenkins will immediately anchor the tackle position while Brandon Scherff takes up the interior.

Oklahoma centre Humphrey earned a perfect Relative Athletic Score (RAS) of 10, rating as physically elite in every category: strength, explosiveness, speed and agility. As a run blocker, he can get to the second level insanely fast, set blocking for screen plays and excelling at trap blocking. As a pass blocker, he has exceptional lower body fluidity. Humphrey possesses rare hip fluidity, allowing him to press block beautifully and anchor against defensive linemen way heavier than him, consistently creating a bubble between him and his quarterback.

Picking up blitzes will always be a rookie lineman’s Achilles’ heel, but Humphrey will also need coaching on post-snap understanding of play development. He is a good all-around blocker, but needs to work on being stickier and more violent in the trenches.

Humphrey is likely to bolster all phases of the offense regardless of which team drafts him. Getting drafted by the Raiders makes sense after they lost Rodney Hudson. Pittsburgh is a prime team to plug-and-play Humphrey, but we believe he’s the perfect fit for HC Sean McVay and QB Matthew Stafford with the Rams.

Shortly after Bob Marley and the Wailers formed, singers Junior Braithwaite, Beverley Kelso and Cherry Smith joined the band. In 1978, the group released its 10th album, Kaya, which opens with the classic “Easy Skanking.”

By Lucas Chan
This entry was posted on Tuesday, April 20th, 2021 at 5:55 pm and is filed under FOOTBALL, Lucas Chan, NFL Draft, Scouting Report. You can follow any responses to this entry through the RSS 2.0 feed. Both comments and pings are currently closed.