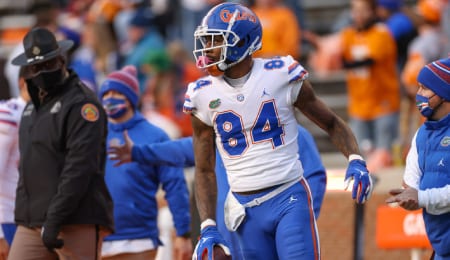 Assessing this year’s tight end draft class after Kyle Pitts was harder than anticipated. This diverse class features full-time receiving tight ends like Brevin Jordan, as well as old-school blockers like Pat Freiermuth. One thing is certain: the quality of talent is much higher as a group than it is for running backs or wide receivers.

Pitts smashes every single measurable for a football player coming into the NFL, with size (245 pounds, a wingspan of 83.5 inches and hand sizes of 10.5 inches), and speed (running a 40-yard dash in 4.4 seconds). That combo will draw comparisons to the great Calvin Johnson. (For shits and giggles, here’s the scouting report we wrote about Johnson when he was drafted.) Pitts’ game film is impressive, blending seamless route running with sure-handedness. Despite the lack of tape on his in-line blocking, we saw enough explosiveness at his pro-day to know he can develop that skill further.

Both Miami and Cincy will be looking to add a vertical element up the seams. Tua Tagovailoa and the Dolphins sorely need a number one pass-catcher and that will either be Ja’Marr Chase or Pitts. For the Bengals, Pitts would become a volume pass-catcher filling in for A.J. Green‘s targets. No matter where Pitts goes, he should be a top seven Fantasy tight end in 2021. While he isn’t expected to land in Dallas, here’s an idea of what he’d be capable of with Dak Prescott throwing to him (see video below). Still, even Stephen A. Smith doesn’t think Pitts could fix what ails the ‘Boys.

Tremble has incredible raw potential, perhaps enough to become the next Aaron Hernandez (but, without the whole murder thing, hopefully). He’s unpolished, but even as a low round draft pick, Tremble should see plenty of the field thanks to his blocking role in Notre Dame’s pro style offense. While his upside is clearly palpable, he will need further development in his route-running and pre- and post-snap understanding of the play.

Baltimore needs to pass more, regardless of what formation. If it wants to continue its three-TE tendencies and stretch the field, then Tremble is the best option — especially given how the Ravens have a history of developing tight ends. The Saints, the other hand, don’t particularly need more pass-catchers, but they do need someone fast inside. In a best-case scenario, if Tremble goes to Baltimore, we could be looking at 60 catches, 800 yards, and 6-to-8 touchdowns. Here’s why we are so excited about him.

Jordan has a compact frame, allowing him to run through tackles after making contested catches. While he is an incredibly smooth route-runner with the quickness to separate, we downgraded him for always playing off the line of scrimmage. So it should come as no surprise then, that as a blocker, Jordan has room for improvement in the NFL, lacking in both size and technique to adequately block edge rushers.

Buffalo may seem like an unlikely suitor, but it makes sense if it split Jordan out against a linebacker when it runs two-TE sets or it could slit him out from 11 personnel to form 10 personnel to take advantage of his size. Assuming he lands in Buffalo, expect Jordan to put a mediocre 40+ reception, 400+ yard season with the Bills.

Freiermuth (AKA “Baby Gronk”) largely skipped the track and field portion of his pro day, opting not to lift, jump or sprint in the wake of shoulder surgery. Despite lacking elite speed and separation, he brings size mismatches to the red zone while punishing defenders as a runner after the catch. Freiermuth is perhaps the most polished blocker among tight ends in this draft, but there is still room for improvement.

Freiermuth is different from the other tight ends on this list because he’s so advanced as a blocker. The offenses listed above which rely on a smash mouth philosophy will benefit from drafting the Vance McDonald-esque tight end.

While completely boring as a prospect, Long is emerging as of the more solid values at tight end in the later rounds. Despite lacking in physical talent, he consistently makes contested catches by boxing out opposing defenders. Long lacks speed and explosiveness when creating separation at the college level, but he might have the highest pro football IQ among tight ends in this draft. Still, his speed, strength and frame will need to be further developed.

Both the Panther and Chargers run similar offenses — run-focused with deep aerials. We doubt Long starts as a TE1 as a rookie; he’ll most likely be blocking as a TE2.

English singer/songwriter/guitarist Dave Mason is best known for time with Traffic, but he’s played with a ton of big names and enjoyed a fine solo career as well. In 1972, he released perhaps his finest solo effort, Headkeeper, and one of the album’s longest tracks is “World in Changes.”

By Lucas Chan
This entry was posted on Wednesday, April 7th, 2021 at 8:31 pm and is filed under FOOTBALL, Lucas Chan, NFL Draft, Scouting Report. You can follow any responses to this entry through the RSS 2.0 feed. Both comments and pings are currently closed.