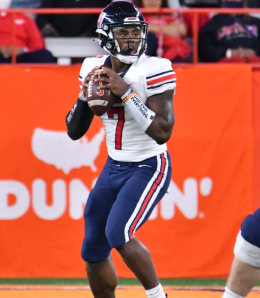 The 2022 NFL Draft is just around the corner, so it’s time to brief you on the top quarterback prospects available this year. This class isn’t as strong as recent years, but that won’t stop some teams from trying to find their franchise QB in round one. What’s fascinating about his year’s QB crop is that it includes a player who could go as high as first overall or slip as far as the second round. Sound crazy? Yes! Let’s dig in.

When former Auburn QB Willis transferred to Liberty, he virtually turned the program around. Last season, he accumulated almost 900 yards on the ground, putting him among the leaders for any QB in the country. The season before, he managed nearly 950, so it’s clear that Willis has the legs to rush out of the pocket if needed, but also the ability to sling it downfield. He’s probably not going in the top five (maybe?), but is definitely slated for the top 10. Still, there are rumours that Atlanta, which picks No. 1, has genuine interest in Willis.

Willis could be a Day One starter depending on where he lands, especially if it’s Carolina or any squad seeking a franchise QB. He will use his run scheme playing prototype and employ his arm to find the slot receiver nicely (see video below). With his elite running game, Willis compares favourably to Lamar Jackson and Jalen Hurts.

Pickett broke Alex Van Pelt‘s school passing record with over 12,300 yards throughout his college career (while also surpassing the Panther TD mark with 81, besting some dude named Dan Marino), capping things off by leading the team to the ACC Championship last year. Considered the most NFL-ready QB in the draft (albeit with a capped upside), Pickett is more of a pocket passer despite his small hands — which spurred endless discussion.

One word we’d use to aptly describe Corral is “stout.” He was thrown to the ground at Mississippi, but kept getting back up and making huge plays. The ankle injury does not scare us because this young stud has come back from everything thrown at him. Corral doesn’t have a cannon-like arm, but compensates for that with impressive accuracy.

Corral could be a viable starter for a team needing a QB as soon as possible, but we think he will really flourish a couple years down the road. He has the heart of a champion and toughness to lead a team to the playoffs. You’d have to think Atlanta could be an option after it dealt away Matt Ryan, but wherever he lands, Corral is unlikely to be a Day One starter. Still, Corral could find his way into the mix as the season progresses.

Over his college career, Cincy product Ridder has only six losses on his record against 44 wins (third most by a QB in history behind only Kellen Moore and Colt McCoy) as a starter over his college career. Ridder is clearly a winner whose is glowing and he knows how to avoid mistakes in the pocket.

Ridder is not the most NFL-ready prospect, but he’s not a long-term project, either. He can be a warrior to lead a team that is based on his character, which outweighs his skills in our opinion. Ridder’s pocket awareness and decision making are quality attributes. If he winds up on a team that is run-oriented, one which won’t force him to do too much, he will likely thrive, probably seeing action at some point in 2022. Consider Ridder a potential waiver wire pick when that happens.

It was an interesting season last year for Howell as he rode the ebbs and flows in the offense en route to becoming the greatest QB in school history (at least from a passing yardage standpoint). He is athletic enough to make deep throws and to escape the pocket when needed. Howell is a capable pocket playmaker and makes very intelligent decisions with his throws.

We don’t expect Howell to be a starter in his first NFL season, more likely learning behind a veteran quarterback and becoming smarter over time. He can make a name for himself in later years once his shot comes. While it would likely involve the Panthers trading down in the draft, how cool would it be for this North Carolina native to wind up in Carolina?

William McKinley Hutchison, better known as Willie Hutch, was the genius behind the soundtrack for the 1974 Blaxploitation movie Foxy Brown. From this comes “Hospital Prelude of Love Theme.” Bow chicka bow wow.

Baltimore needs to pass more, regardless of what formation. If it wants to continue its three-TE tendencies and stretch the field, then Tremble is the best option — especially given how the Ravens have a history of developing tight ends. The Saints, the other hand, don’t particularly need more pass-catchers, but they do need someone fast inside. In a best-case scenario, if Tremble goes to Baltimore, we could be looking at 60 catches, 800 yards, and 6-to-8 touchdowns.

Ja’Marr Chase should be the first wide receiver off the board. (Touchdown Wire-USA Today) Outside of LSU’s Ja’Marr Chase, it is hard to imagine a drier draft year for wide receivers than 2021. NFL teams should approach this year’s draft looking to add value receivers to their core pass-catchers. Teams like the New York Giants […]