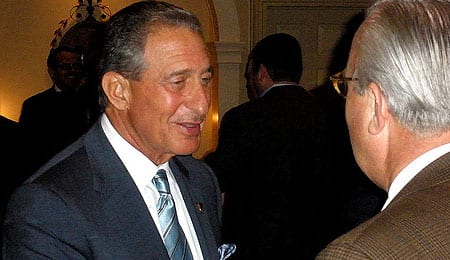 After the Falcons clinched their fourth division title, team owner Arthur Blank was doused in Gatorade.

The 2010 NFL regular season is in the books, and the playoffs are just around the corner. The most surprising team in the playoffs is the Seattle Seahawks, the first division champion in NFL history with a losing record.

Biggest Jump: After claiming the NFC West division title over the Rams, the Seahawks jumped nine spots from 26th to 17th.

Biggest Drop: With the Titans dropping eight of their last nine games, they slipped another four spots to 24th.

1. (1) New England Patriots, 14-2: Tom Brady and the Pats look merely unstoppable going into the playoffs as the top seed. Brady has not turned over the ball since Week 6 and has set multiple records this season. The Pats have won eight straight games, and four of the last five haven’t been close.

2. (2) Atlanta Falcons, 13-3: The Falcons ended their season 7-1 at home and claimed home-field advantage throughout the playoffs as the number one seed in the NFC. This is the fourth time Atlanta has been a division winner in franchise history, but it’s the first time since 2004, prompting the Falcons to give owner Arthur Blank a Gatorade bath.

3. (5) Pittsburgh Steelers, 12-4: The Steelers earned two big wins to end their season and clinch the AFC North, and despite the fact that the victories were against losing teams, it will be a good confidence booster beating up on the little guys before their first playoff game following a first round bye.

4. (3) Baltimore Ravens, 12-4: The Ravens’ defense is superb, however, they’re going to need more offense if they want to beat the Chiefs in Kansas City on Sunday. Baltimore didn’t exactly beat up on the Bengals on Sunday, and any chance it had of taking the AFC North was lost when the Steelers romped over the Browns.

5. (6) Chicago Bears, 11-5: The Bears’ tough loss against the Packers on Sunday proves that any team can win it. There are questions about whether Chicago’s offense is good enough for the team to make noise in the playoffs, so Jay Cutler and Matt Forte will need to play their best in two weeks.

6. (4) New Orleans Saints, 11-5: The defending champions lost at home to Tampa Bay in the season finale, but with a date against Seattle, the Saints probably have the best matchup of all teams in the first round of the playoffs. They already beat Seattle at home earlier this season by 15 points, and while this time it will be tougher, being in Seattle, they should be able to handle it. If both the Saints and Eagles win, New Orleans will have to play in Atlanta.

7. (8) New York Jets, 11-5: Mark Sanchez got plenty of rest Sunday, playing just the first series and not throwing a single pass before taking the remainder of the day off as the Jets hammered the Bills. The unpredictable Jets will need their “A” game against Peyton Manning in Indy.

8. (7) Philadelphia Eagles, 10-6: Most of the Eagles’ starters had the day off Sunday as Philly lost to Dallas in a meaningless game. Michael Vick (quad) says he’s now 75 per cent healthy. Let’s hope he’s ready to go Sunday afternoon against the Packers in a showdown everyone wants to see.

9. (9) Green Bay Packers, 10-6: Aaron Rodgers is proving his team is a Super Bowl contender now that the Packers’ defense is back to prime form. All the injuries and inconsistent play that led to Green Bay having to eke into the playoffs will be forgotten if this team can make a big post-season run.

10. (11) Indianapolis Colts, 10-6: If Peyton Manning of the defending AFC champion Colts has a shot at a second Super Bowl title, he’ll have to get past the Jets again this year.

11. (10) Kansas City Chiefs, 10-6: The Chiefs have gone 7-1 at home this season (with their only loss coming against Oakland Sunday), but they will need to be able to run the ball with Jamaal Charles against the Ravens if they want to move past the Wild Card round. Kansas City only managed a 2-4 mark within its division, but was 8-2 against everyone else — which bodes well for its chances to make noise in the playoffs.

12. (12) New York Giants, 10-6: Despite reaching ten wins, the Giants missed the playoffs because of Green Bay’s win over Chicago. Tom Coughlin earned a vote of confidence, so he will most likely be back, but blowing that 21-point lead against the Eagles came back to haunt the G-Men.

13. (13) Tampa Bay Buccaneers, 10-6: The Bucs had a great season, more than tripling their 2009 win total behind their young talent, but this is another ten-win team that missed the playoffs. Look for them to continue to improve behind Josh Freeman, Mike Williams, and LeGarrette Blount.

14. (14) San Diego Chargers, 9-7: Ryan Mathews finally had a breakout game; too bad it was a case of little too late this year. The Chargers will need to have a better start next season since after four straight AFC West titles, they will be watching this year’s playoffs from their couches.

15. (15) Jacksonville Jaguars, 8-8: The Jags were plagued by injuries late in the season, and wound up losing four of their six games to finish two games behind the Colts. Jacksonville still had a slim shot to make the playoffs, but couldn’t even take care of its own business, losing 34-17 to Houston in the season finale.

16. (17) Oakland Raiders, 8-8: The Raiders are an improving team that has a lot to look forward to next season after going .500 this year. Still, it’s shocking they couldn’t muster a winning record considering they went a perfect 6-0 against their AFC West rivals. As long as he stays healthy, Darren McFadden looks like a force to be reckoned with now that he found his groove.

17. (26) Seattle Seahawks, 7-9: This was a big surprise, but winning their last game over the Rams propelled Pete Carroll’s Seahawks into the playoffs as the fourth seed despite finishing below .500. Their game against the Saints is at home where they will need their 12th man if they have any shot at upsetting the defending champs.

18. (16) St. Louis Rams, 7-9: Lost in the sad ending that left the Rams out of the playoffs is the fact that Sam Bradford’s great play this season helped the worst team in the NFL in 2009 improve to 7-9. And if the Rams had done better than 3-3 against the pathetic NFC West, they’d be the ones hosting a game this weekend. Still, this franchise has a promising future.

19. (18) Miami Dolphins, 7-9: Brandon Marshall was a good addition, but Chad Henne just is not showing enough improvement to turn Miami’s pass offense into a real threat offense. The Dolphins dropped four of their last five, and that could very well cost coach Tony Sparano his job.

20. (19) Minnesota Vikings, 6-10: Bye bye, Brett Favre. If his 20-year career is really over this time, we can finally stop dealing with his drama. Meanwhile, Adrian Peterson and Sidney Rice will be healthy next season, but will Joe Webb be the starting QB?

21. (22) Dallas Cowboys, 6-10: Jason Garrett went 5-3 since being named interim coach, and that was without Tony Romo. It certainly looks like Jerry Jones will give Garrett the job on a full-time basis.

22. (23) Houston Texans, 6-10: Texan owner Bob McNair has decided to retain coach Gary Kubiak despite the fact the team had its least number of wins since 2006. On the plus side, Arian Foster became the first undrafted player to win a rushing title.

23. (24) Detroit Lions, 6-10: By ending the season on a four-game win streak with wins over Green Bay, Tampa Bay, Miami, and Minnesota, the Lions managed to triple their win total from 2009.

24. (20) Tennessee Titans, 6-10: This was a poor season for the Titans, and many questions about this team remain. Chris Johnson may have rushed for 1,364 yards this season, but his average yards per carry dropped from 5.6 to 4.3 and he sure didn’t look sharp in the season finale, managing just 39 yards.

25. (21) Washington Redskins, 6-10: The only joy the Redskin fans got in their loss to the Giants Sunday was the chance to give New York the gears, once it became clear that Green Bay had won and the Giants would miss the playoffs. Meanwhile, we bet the Redskin organization is happy about the clause in Donovan McNabb’s contract since he probably will not be coming back next season and Washington won’t be on the hook financially.

26. (27) San Francisco 49ers, 6-10: The 49ers entered the season as the NFC West favourites and left it seeking a new GM, new head coach and probably a new quarterback. There are rumours that San Francisco may pair Michael Lombardi and Jim Harbaugh as general manager and head coach, so perhaps 2011 will be a more fruitful season.

27. (25) Cleveland Browns, 5-11: Cleveland was humiliated at home by the Steelers on Sunday. The next day, coach Eric Mangini was fired after two seasons. While Cleveland made modest improvements last season, it was unable to build on that in 2010.

28. (29) Arizona Cardinals, 5-11: The Cardinals are another team that needs to rebuild big time after finishing last in rushing yards and second to last in passing yards while winding up in the cellar of the worst division in football. Is it really just two years ago that this team was in the Super Bowl? It sure seems longer than that.

29. (28) Buffalo Bills, 4-12: The Bills were somewhat competitive throughout most of the season and managed to pull out four wins before getting dominated by the Patriots and Jets at the end of the regular season. The season finale was just ugly as Buffalo turned it over six times.

30. (30) Cincinnati Bengals, 4-12: Cincy gave Baltimore a fight, but failed to keep its three-game winning streak against the Ravens alive. Surprisingly, Marvin Lewis will return to coach the Bengals next season.

31. (31) Denver Broncos, 4-12: Tim Tebow may or may not be the Broncos’ starting quarterback next season since Josh McDaniels was fired after Denver lost a franchise-worst 12 games.

32. (32) Carolina Panthers, 2-14: John Fox failed to guide Carolina to a win in his final game as the team’s coach, however, the Panthers will receive the first pick in the 2011 NFL Draft unless they decide to trade it away.

After beating the Steelers in Pittsburgh, the Jets jumped four spots from ninth to fifth. Clearly, rumours of their demise were greatly exaggerated.

The Patriots continue to make a mockery of their opposition, and as a result have forced their way back into the top slot in this week’s rankings.

The battle for AFC supremacy on Monday night turned into a laugher as the Jets were terminated — with extreme prejudice — by the Pats. The Steelers, meanwhile, earned a statement win of their own to creep closer to the top of the standings.