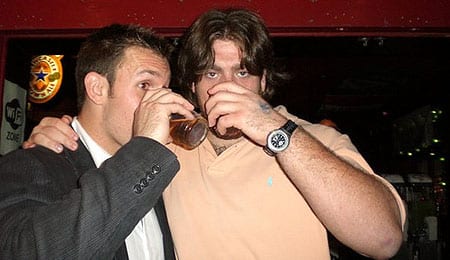 When he’s not tying one on, Owen Daniels (left) has been getting it done for the Texans.

By RotoRob and Trevor Blake

The Patriots continue to make a mockery of their opposition, and as a result have forced their way back into the top slot in this week’s rankings.

Biggest Jump: Since interim head coach Jason Garrett took over, the Cowboys have been competing in and this week they jumped four spots from 24th to 20th.

Biggest Drop: After getting dominated by the 49ers, the Seahawks have dropped four spots from 20th to 24th.

1. (2) New England Patriots, 11-2: Clearly, no one can stop New England right now. Not even Mother Nature. After laying a serious beat-down on the Bears, the Pats have locked up a playoff spot for the eighth time in ten years — a simply incredible run.

2. (1) Atlanta Falcons, 11-2: The Falcons have won seven straight — scoring at least 20 points in each game — to remain a game ahead of the Saints in an exciting NFC South race. And Atlanta’s red-hot offense gets a boost this week with Jason Snelling expected to return against the Seahawks.

3. (3) Pittsburgh Steelers, 10-3: LaMarr Woodley had one of two Steeler interception returns for a touchdown as Pittsburgh extended Cincinnati’s pain.

4. (4) New Orleans Saints, 10-3: Even when the Saints are making mistakes now, they are finding a way to reverse them. Sunday, while leading 14-6, Courtney Roby fumbled, giving the Rams the ball at the New Orleans’s 21 yard line and a great opportunity. However, Michael Jenkins grabbed an interception, ran it back 96 yards for the score, and the rout was on for the Saints.

5. (5) Baltimore Ravens, 9-4: The Ravens were in peril of letting another precious win slip through their talons, but were saved by their defense when Josh Wilson picked Matt Schaub in OT and ran it into the end zone for the game-winning score.

6. (9) Philadelphia Eagles, 9-4: DeSean Jackson had a game for the ages Sunday, pulling in four receptions for 210 yards and a TD as the Eagles maintained a share of the NFC East lead while ensuring division rival Dallas will suffer its first losing season since 2004.

7. (10) New York Giants, 9-4: Ahmad Bradshaw had a 48-yard touchdown run — his longest rush of the season — and went over 100 yards for the first time since Week Seven as the Giants took out Minnesota. Better yet, the wrist injury he suffered late in the game won’t be a concern this weekend, so keep him active.

8. (8) Chicago Bears, 9-4: The snowy conditions affected the Bears — not the Pats — on Sunday. Da Bears only managed 185 total yards as their five-game win streak was snapped with a serious exclamation point.

9. (6) New York Jets, 9-4: The Jets were unable to rebound after the humiliating loss they suffered against the Pats, going down at the hands of the Dolphins Sunday. Things have gotten so bad that New York’s coaches have been forced to help tackle the opposition. Seriously.

10. (7) Green Bay Packers, 8-5: Well, we now know how effective the Packer offense is without Aaron Rodgers, and it’s just plain ugly. Unfortunately, we won’t know Rodgers’s status until Saturday, so if you own him, you better have another option lined up for Week 15.

11. (12) Jacksonville Jaguars, 8-5: The Jaguars control their own destiny in the AFC South, but if they lose to Indy Sunday, that won’t be the case anymore. Can you say big game?

12. (14) San Diego Chargers, 7-6: With a massive statement win over the Chiefs, the Chargers now find themselves just one game back in the AFC West.

13. (13) Tampa Bay Buccaneers, 8-5: The Bucs dodged a bullet Sunday as the Redskins not only missed two easy field goals, but then blew an extra point that would have tied the game. Phew!

14. (11) Kansas City Chiefs, 8-5: Kansas City still controls its own playoff destiny, but after getting shelled by the Chargers in Week 14 there are plenty more doubters about this team.

15. (15) Indianapolis Colts, 7-6: The Colts are a game back of the Jags in the AFC South but still control their own destiny because they face Jacksonville in Week 15. A loss in this game would pretty much destroy Indy’s chances. Boo hoo (yes, those are sarcastic tears).

16. (18) Miami Dolphins, 7-6: In response to Jet strength and conditioning coach Sal Alosi tripping Miami’s Nolan Carroll, Miami inside linebacker Channing Crowder came up with one of the quotes of the year: “I wish they’d tripped me. I’d have broken that old man’s leg.” Classic! Meanwhile, the Dolphins’ playoff hopes are still alive after they squeaked past New York in a game that was so ugly it was offensive, but sure didn’t feature much offense.

17. (16) Oakland Raiders, 6-7: Oakland is a perfect 4-0 against its division rivals this season, and will look to make it 5-0 against the woeful Broncos Sunday. But you’ve got to know Denver wants revenge after allowing the Raiders to pile up a franchise-record 59 points in a loss earlier this season. Grudge match time, baby!

19. (19) Houston Texans, 5-8: It’s the Houston-Tennessee Cage Match II on Sunday. Hey, at least the fans of these two going-nowhere clubs will have a reason to tune in.

21. (21) Cleveland Browns, 5-8: It’s hard to believe the Browns had been actually playing well lately given how many mistakes they made in losing to the Bills Sunday. Yes, that’s right. They lost to the Bills, thereby eliminating themselves from playoff contention. And so it should be.

22. (22) Tennessee Titans, 5-8: The Titans are three games back in the AFC South and pretty much out of the playoff race. If Jacksonville managed to win one more game, Tennessee is out regardless of what it does. Remember the Titans, indeed.

23. (26) San Francisco 49ers, 5-8: You’ve got to love the NFC West, a division so putrid that the 49ers — despite being three games under .500 — are just a game out of the lead. However, a visit to San Diego Sunday could spell doom once and for all for San Francisco, a team many expected to win its division this year.

24. (20) Seattle Seahawks, 6-7: Speaking of crappy teams in the playoff hunt, the Seahawks are tied for first in the NFC West with a sub-.500 record. Seattle has lost five of its last seven games and is still a co-division leader! Oh, the humanity!

25. (25) Washington Redskins, 5-8: The Redskins have been one of the most disappointing teams in the NFL this season. So much for bringing in “winners” like Mike Shanahan and Donovan McNabb. How’s that working out for you, guys?

26. (23) Minnesota Vikings, 5-8: Brett Favre’s ironman steak is over, leaving virtually no reason left to watch a Viking game this season [insert irony here]. Or, depending on how you want to look at it, giving more hope to the team’s future than we’ve seen in quite some time.

27. (29) Arizona Cardinals, 4-9: Rookie John Skelton wasn’t exactly brilliant in Week 14, but he apparently did enough to earn himself another start this weekend. So if you find yourself incredibly desperate for QB help this weekend, give him a look, as he’s likely to put up better numbers against the pathetic Panthers.

28. (27) Buffalo Bills, 3-10: Ryan Fitzpatrick threw another TD pass and actually had a pretty good day as the Bills won another game Sunday. Just don’t expect much from him this week against a solid Dolphin pass defense.

29. (31) Detroit Lions, 3-10: The Lions were able to negate Aaron Rodgers by knocking him out of the game, the key play as they snapped a five-game losing streak. Drew Stanton, who gained some wire traction after his nice showing in Week 13, was simply awful, but he did throw the TD pass that provided the margin of victory, so I guess that’s something.

30. (28) Denver Broncos, 3-10: Can Denver finally hand the Raiders their first 2010 loss within the division? Um…I doubt it. This team has dropped four straight and has been held under 15 points in three of those games. Ugh.

By Trevor Blake
This entry was posted on Wednesday, December 15th, 2010 at 8:25 pm and is filed under FOOTBALL, NFL Power Rankings, RotoRob, Trevor Blake. You can follow any responses to this entry through the RSS 2.0 feed. You can skip to the end and leave a response. Pinging is currently not allowed.