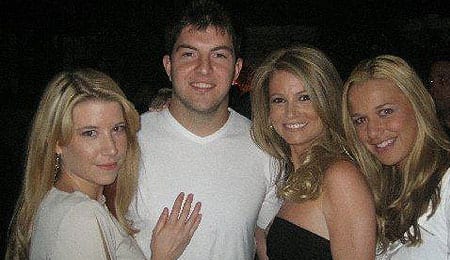 Now that Rex Grossman is starting, the hotties are flocking around.

There’s just one more week left in the 2010 regular season. The playoffs are almost here and we are all anxious to see what happens.

Biggest Drop: Both the Eagles and the Chargers dropped four spots after losing this week.

1. (1) New England Patriots, 13-2: Tom Brady is clearly unstoppable, leading his team to their seventh straight win as they hunt for a Super Bowl win.

2. (2) Atlanta Falcons, 12-3: The Falcons’ loss in the Georgia Dome may have crushed some of their confidence for playing at home in the playoffs, however, Matt Ryan has still only lost two home games in his career.

3. (4) Baltimore Ravens, 11-4: Another defensive win has clinched a third straight trip to the playoffs for the Ravens, while bringing them one step closer to the division title. Next up, Baltimore faces Cincinnati, which is coming off a huge win against San Diego.

4. (7) New Orleans Saints, 11-4: Taking revenge on the Falcons for their loss in New Orleans earlier this season must have felt great for Drew Brees and the Saints, as clinching another playoff berth with the win is just gravy.

5. (6) Pittsburgh Steelers, 11-4: The Steelers clearly had a dominating performance against the worst team in the league during their Thursday night game. One more win in Cleveland can land them the AFC North division title, but this one has the makings of a trap game given the rivalry between these teams.

6. (8) Chicago Bears, 11-4: After outplaying the Jets on Sunday, the Bears have something going here as one of the underrated playoff teams in the league. Chicago’s last game is in Green Bay, but it has already clinched the division, so with pretty much nothing to play for, the Bears could rest some of their starters. Of course, the fact that this game does mean something to the Packers should ensure Chicago shows up in full force.

7. (3) Philadelphia Eagles, 10-5: A surprising loss to the Vikings on Tuesday makes us wonder what would have happened if the Eagles’ game was never postponed. Philly has blown its chances of a first-round bye, and now all that matters is getting Michael Vick healthy for the playoffs.

8. (9) New York Jets, 10-5: The Jets’ loss in Chicago came with good news as they clinched a wild card spot thanks to Jacksonville’s loss to Washington. But what’s the deal with New York’s vaunted defense all of a sudden? In the last four games, the Jets have surrendered 110 points and an average of 309 yards against. That better be fixed before the playoffs.

9. (12) Green Bay Packers, 9-6: Aaron Rodgers put up a huge effort, passing for 404 yards to help the Packers tie the Giants and remain tied with the Buccaneers in the chase for the final NFC Wild Card spot. Right now, the Packers hold the tiebreaker, but need a W Sunday to maintain it.

10. (11) Kansas City Chiefs, 10-5: The Chiefs were finally able to wrap up the division title; props to Todd Haley and the Chiefs.

11. (13) Indianapolis Colts, 9-6: The Colts’ late push gave them the edge over Jacksonville, and with David Garrard and Maurice Jones-Drew injured, Peyton Manning is sure to bring another division title to Indy.

12. (9) New York Giants, 9-6: Two straight losses leaves the Giants in the dust and probably out of the playoffs unless the Packers blow in Sunday.

13. (15) Tampa Bay Buccaneers, 9-6: A win in New Orleans can propel them into the last Wild Card spot if both the Giants and Packers lose. Although Josh Freeman will probably need to put up another five passing touchdowns performance in order to win.

14. (10) San Diego Chargers, 8-7: A poor start to the Chargers’ season has come back to bite them in the ass. With Ryan Mathews coming into his own when he is healthy, they will have to wait until next year to see what he can do in a playoff game.

15. (14) Jacksonville Jaguars, 8-7: A third straight loss next week will eliminate the Jags from playoff contention and seal another disappointing year. And with both Garrard and possibly MJD out, we don’t like Jacksonville’s chances.

16. (20) St. Louis Rams, 7-8: A win in Seattle on Sunday will hand the Rams the NFC West title and a spot in the playoffs. Sam Bradford should be proud to have led last year’s worst team to a division title even if they would only be 8-8.

17. (16) Oakland Raiders, 7-8: The only thing left for the Raiders to play for is a chance to ruin Kansas City’s playoff seeding and end the 2010 season at .500. Of course, Oakland can still finish with an unblemished division record at 6-0, which tells you how bad it’s been against the rest of the NFL.

18. (17) Miami Dolphins, 7-8: The Dolphins are 1-7 at home this season; I think it’s pretty self-explanatory while they won’t be going to the playoffs. Next up, a meaningless game in New England. How about the Heat, Miami fans?

19. (24) Minnesota Vikings, 6-9: If only the Vikings’ defense played like they did Tuesday all season. Joe Webb may hold some excitement for Viking fans in the future.

20. (19) Tennessee Titans, 6-9: Some major changes are coming after the Titans’ poor season. All that’s left for them now is to try to spoil the Colts’ party.

21. (26) Washington Redskins, 6-9: Two weeks ago, I would not have believed Rex Grossman could win a game in Jacksonville. Then again, it was the defense that prevailed with the overtime interception.

22. (18) Dallas Cowboys, 5-10: Losing to the Cardinals on Christmas has left America’s Team speechless. To think that before the season, most would have expected that to be a big game, followed by next week’s matchup against Philly that should have had the NFC East on the line. Maybe next year, guys.

23. (21) Houston Texans, 5-10: The Texans are trying to avoid a fifth straight loss that would doom Gary Kubiak to his worst record in his five seasons as head coach.

24. (28) Detroit Lions, 5-10: The Lions are currently riding a three-game win streak including the last two on the road (boy, now that they have that monkey off their backs…). Calvin Johnson was named a starting wide receiver for the NFC Pro Bowl team, one of the few highlights in yet another forgettable football season in the Motor City.

26. (23) Seattle Seahawks, 6-9: If only Matt Hasselbeck didn’t hurt his back on an untouched one-yard touchdown run.

27. (25) San Francisco 49ers, 5-10: I know everyone saw Troy Smith yelling at Mike Singletary on the sideline this week. Singletary has since been fired and the 49ers are even more lost.

28. (27) Buffalo Bills, 4-11: Despite an ugly 4-11 mark, the Bills have been very competitive this season. Still, three straight years in the AFC East basement must be getting old for Bills’ fans.

29. (29) Arizona Cardinals, 5-10: The rejuvenated Cardinals made their plays too late in the season. All that’s left for them is a date with the 49ers to avoid the division cellar.

30. (30) Cincinnati Bengals, 4-11: The Bengals beat the Chargers without Terrell Owens and Chad Ochocinco. Who would have thought that could happen?

31. (31) Denver Broncos, 4-11: Tim Tebow surprised all of us with over 300 passing yards and two touchdown passes to help the Broncos beat the Texans by one point.

32. (32) Carolina Panthers, 2-13: If John Fox is fired, at least he won his last home game against the Cardinals two weeks ago.

By Trevor Blake
Tags: New Orleans Saints, Tampa Bay Buccaneers
This entry was posted on Thursday, December 30th, 2010 at 6:04 pm and is filed under FOOTBALL, NFL Power Rankings, Trevor Blake. You can follow any responses to this entry through the RSS 2.0 feed. Both comments and pings are currently closed.