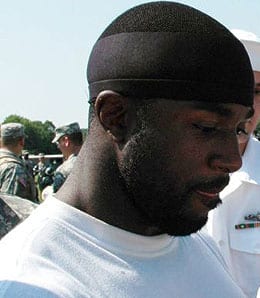 Brian Westbrook will be taking most of the handoffs in San Francisco now that Frank Gore is done for the season.

By Trevor Blake and RotoRob

After some stability at the top of the rankings last week, this time we’ve got a new leader as the Atlanta Falcons have finally ascended to the top of the heap.

Biggest Jump: After beating the Eagles, the Bears jumped five spots from 12th to seventh.

Biggest Drop: The Eagles slid three spots from sixth to ninth after their most recent loss.

1. (2) Atlanta Falcons, 9-2: After their statement win over the Packers Sunday, the Falcons have not only clinched a third straight winning campaign, but they have taken the final step to move to the top of our rankings. If placekicker Matt Bryant is still available in your league, pick him up; he’s second in the league in scoring and has been perfect in eight of 11 games this season.

2. (1) New England Patriots, 9-2: The Pats got an early scare on Thanksgiving in Detroit, but woke up in plenty of time to stuff the Lions thanks to another brilliant performance by Tom Brady. Let’s see if he can continue his surge in a huge matchup Monday night against the Jets.

3. (3) New York Jets, 9-2: He doesn’t play enough to warrant real Fantasy consideration, but Brad Smith has a flair for the dramatic, scoring on a 53-yard run and an 89-yard kickoff return — the latter with only one shoe — to spark the Jets to a win over the hapless Bengals on Thanksgiving. But can the Jets keep their four-game winning streak alive Monday night in New England?

4. (4) Baltimore Ravens, 8-3: On Sunday, Joe Flacco continued his recent excellent play, tossing two TD passes to lead the Ravens over the Bucs. He’ll need to keep it up in Week 13 as Baltimore hosts Pittsburgh with the AFC North lead on the line.

5. (5) Pittsburgh Steelers, 8-3: The Steelers dodged a bullet Sunday when Stevie Johnson dropped what would have been a game-winning touchdown catch for the Bills, allowing Pittsburgh to escape with an overtime win when new placekicker Shaun Suisham kicked his fourth field goal of the day. Fantasy owners are starting to pay attention to Suisham, so if you need help, give him a look.

6. (8) New Orleans Saints, 8-3: Cornerback Malcolm Jenkins hasn’t been much of a Fantasy factor this season, but he sure affected the Thanksgiving tilt in Dallas when he forced his first fumble of the year to help seal the Saints’ win.

7. (12) Chicago Bears, 8-3: The Bears’ smoke and mirror act suddenly looks a lot more real after a huge win over the Eagles Sunday that propelled Chicago into sole possession of first place in the NFC North. Jay Cutler — who has been dropped in some leagues after back-to-back-stinkers — had his finest game of the season, matching a career high with four TD passes to lead the way.

8. (7) Green Bay Packers, 7-4: The Packers lost ground in the NFC race with their loss in Atlanta Sunday. On the plus side, Aaron Rodgers has been on a serious roll the past three games and Sunday he passed for a season-best 344 yards and he even ran for a season-high 51 yards.

9. (6) Philadelphia Eagles, 7-4: Sunday marked the first time this season the Eagles lost when Michael Vick started and finished. And now they face a short week, as Houston comes to town for a matchup Thursday night.

10. (9) New York Giants, 7-4: The Giants trailed 17-6 to Jacksonville at halftime on Sunday, and a loss could have easily derailed their season. But Justin Tuck led a defense that held the Jags to just a field goal in the second half as New York prevailed, setting up a showdown with NFC East rival Washington this weekend.

11. (14) San Diego Chargers, 6-5: The Chargers walked into Indianapolis Sunday night and completely nullified Peyton Manning to beat the Colts for the fifth time in six tries.

12. (13) Kansas City Chiefs, 7-4: If Matt Cassel is still unowned in your league — a very real possibility — you better scoop him up fast as he’s on a tear the last three games. And with a date this weekend against the Broncos and their underwhelming pass defence, he should be in line for another big day.

13. (11) Tampa Bay Buccaneers, 7-4: After losing to Baltimore on Sunday, the Bucs are still without a win against a winning team. And with Atlanta visiting this weekend, that trend could continue. To make matters worse, Tampa Bay lost rookie safety Cody Grimm to a broken leg in the Ravens’ game. Cornerback Ronde Barber was rumoured to be his replacement, but the Bucs have opted against that plan — for now.

14. (10) Indianapolis Colts, 6-5: Peyton Manning got picked four times, two of which were returned for TDs, as the Colts were humiliated 36-14 at home by San Diego — the worst home loss the Colts have ever suffered since Manning has been their QB.

15. (19) Miami Dolphins, 6-5: Chad Henne returned from his knee injury and enjoyed his best game since Week Two to lead the Dolphins to a convincing win in Oakland. If he’s been dropped in your league, he could be worth a look, especially with a date against Cleveland’s middling pass defense on tap this weekend.

16. (15) Jacksonville Jaguars, 6-5: David Garrard had another awful game Sunday, getting sacked on three straight plays at one point as the Jags blew a big lead. Small wonder he’s getting dumped in plenty of leagues.

17. (20) Houston Texans, 5-6: The Texans caught a break as Andre Johnson won’t be suspended after getting into a scrap with Tennessee’s Cortland Finnegan (who wouldn’t want to slap a dude with that kind of name?). They’ll definitely need their star wide receiver with a very tough game in Philly on Thursday on short rest.

18. (22) St. Louis Rams, 5-6: Sam Bradford is starting to gain more traction on the waiver wire as he’s looked much more consistent the past half-dozen games and, on Sunday, his first career 300-yard game — and finest overall effort of his brief career — helped the Rams down Denver.

19. (17) Tennessee Titans, 5-6: Cornerback Cortland Finnegan got into it with Andre Johnson, but the Titan offense couldn’t muster a single point as Rusty Smith clearly wasn’t the answer at QB for Tennessee.

20. (16) Oakland Raiders, 5-6: The Raiders have now lost five straight home games against the Dolphins. On the plus side, rookie Jacoby Ford went ballistic and is worth a look in deeper leagues.

21. (18) Washington Redskins, 5-6: Washington’s pathetic rushing game will now be without Clinton Portis for the rest of the season after he was put on IR last week.

22. (21) Seattle Seahawks, 5-6: Seattle got roughed up at home by the Chiefs and, with its fourth loss in five games, has fallen into a tie for the division lead with the Rams. Matt Hasselbeck was coming off back-to-back strong efforts, but he got picked twice and couldn’t afford to make any mistakes considering how atracious the the Seahawk defence has been.

23. (25) Minnesota Vikings, 4-7: Brett Favre didn’t throw an interception for the first time since Week Six as the Vikings finally ended a nine-game road losing streak even though they were without Adrian Peterson (ankle) for most of the game.

24. (23) Cleveland Browns, 4-7: Jake Delhomme stepped in for injured Colt McCoy (ankle) and, while he didn’t exactly set the world on fire, he did have his best game of the season as the Browns barely squeaked by the awful Panthers.

25. (26) San Francisco 49ers, 4-7: With a big win on Monday night, the 49ers are now just a game back in the miserable excuse for a division that is the NFC West. Troy Smith hasn’t looked good the past couple of weeks, but there’s no doubt that he’s breathed some life into San Francisco’s offense and he deserves a look in deeper leagues.

26. (24) Dallas Cowboys, 3-8: The Cowboys had a chance to pull off a fantastic comeback against the Saints on Thanksgiving, but Roy Williams got stripped of the ball, dooming Dallas to its first loss under interim head coach Jason Garrett.

27. (29) Buffalo Bills, 2-9: What would have been the game-winning touchdown went right through Stevie Johnson’s hands, and a glorious upset win became yet another loss for the Bills. Buffalo played the Steelers tight, but close only counts in horseshoes and grenades.

28. (27) Denver Broncos, 3-8: The Broncos are a real mess now, and while they made a valiant effort to come back, they fell short against the Rams on Sunday. Hey, at least Brandon Lloyd’s career year continued with another two TD catches, giving him nine on the season. Not too shabby considering he had totaled seven TD receptions over the past five seasons combined.

29. (28) Arizona Cardinals, 3-8: The Cards got ripped on Monday Night Football, and Derek Anderson — seen laughing on the sidelines with his team down by 18 — lost his shit when asked about it in the post-game interview. Classic!

30. (30) Cincinnati Bengals, 2-9: The Bungles have now dropped eight straight as their nightmare season continues to careen out of control. Terrell Owens is having a great season, but with Carson Palmer out and the Jets defense sparkling as usual, T.O. was shut down.

31. (31) Detroit Lions, 2-9: The Lions had an 11-point lead over the Patriots late in the first half of their Thanksgiving tilt, but they were completely steamrolled from that point on as Detroit suffered its franchise-worst seventh straight Turkey Day loss. Shaun Hill, who has been gaining traction on the waiver wire lately, was not sharp as he was picked twice and had 19 incompletions.

32. (32) Carolina Panthers, 1-10: How ironic is it that Carolina — which has struggled all season with its quarterback play — lost to Jake Delhomme, the QB it cut? Jimmy Clausen has potential, and he’s been better in his last two games, but he has a long way to go before he’s any kind of Fantasy option.

By Trevor Blake
Tags: NFL
This entry was posted on Wednesday, December 1st, 2010 at 3:32 pm and is filed under FOOTBALL, NFL Power Rankings, RotoRob, Trevor Blake. You can follow any responses to this entry through the RSS 2.0 feed. Both comments and pings are currently closed.