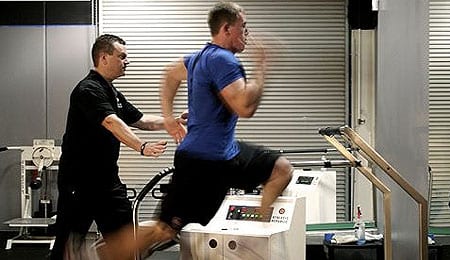 You can expect Toby Gerhart to do plenty of running for the Vikes with Adrian Peterson hurting.

On Sunday, most football fans were lucky enough (assuming you’re not a Giants’ fan, that is) to witness one of the greatest comebacks in history when Michael Vick and DeSean Jackson led the Eagles to a 38-31 victory after trailing by 21 points with 8:17 to go in the fourth quarter. Jackson’s game winning 65-yard punt return touchdown as time expired is one for the record books.

Biggest Jump: After beating the Steelers in Pittsburgh, the Jets jumped four spots from ninth to fifth. Clearly, rumours of their demise were greatly exaggerated.

Biggest Drop: The Steelers slid three spots from third to sixth after losing to the Jets at home.

1. (1) New England Patriots, 12-2: Tom Brady set two NFL records this week: the first was running his streak to seven straight games with at least two touchdown passes and no interceptions. The second is a single-season record that remains active with 292 pass attempts without an interception. Let’s just say Brady is looking unstoppable heading into the playoffs.

2. (2) Atlanta Falcons, 12-2: Atlanta has won eight straight, but now face their toughest game of the year against the Saints at home on Monday night. This NFC South showdown could be one for the memories and Atlanta has to be over the moon to be returning home for the first time in almost a month.

3. (6) Philadelphia Eagles, 10-4: An unbelievable comeback authored by Michael Vick adds fuel to his potential MVP season as the Eagles took over sole possession of first in the NFC East over the Giants. Look for another win over the struggling Vikings as Philly closes out the season with a pair of home games.

4. (5) Baltimore Ravens, 10-4: A huge victory over the Saints, keyed by 233 total yards and two touchdowns from Ray Rice, finally gave Baltimore a win over a good team and keeps the Ravens’ divisional win hopes alive.

5. (9) New York Jets, 10-4: The Jets’ win over the Steelers was much needed, and victory in Chicago next week they can keep their wild card hopes alive. Mark Sanchez ended his recent struggles with a nice game against Pittsburgh, but he may be in for a hard game against the Bear defense that’s much tougher against the pass than the Steelers’ D is.

6. (3) Pittsburgh Steelers, 10-4: A tough loss has left the Steelers tied for the division lead with the Ravens, but on the plus side, their last two games are against Carolina and Cleveland. Mike Wallace should get back to the end zone before the season ends.

7. (4) New Orleans Saints, 10-4: Another loss for the Saints is further proof that this isn’t the same team as last year. Their running game has been inconsistent all season, much of that because of injuries. And now New Orleans has an extremely tough game in Atlanta against the Falcons and Matt Ryan, who has only lost once at home in his career.

8. (8) Chicago Bears, 10-4: After possibly taking Brett Favre out of football (a feat many likely feel deserves kudos), the Bears clinched the NFC North and now hold the second seed in the NFC. Their next game is against the Jets before traveling to Green Bay to try to improve to 6-0 within the division.

9. (7) New York Giants, 9-5: The Giants suffered a devastating loss in their last home game of the season thanks to Matt Dodge’s line drive punt. Eli Manning called an all-players meeting to boost the team’s confidence after blowing a 21-point lead.

10. (12) San Diego Chargers, 8-6: Now there’s the Vincent Jackson we all know. Wins in their last two games in Cincinnati and Denver could give the Chargers the division, depending on what happens with the Chiefs.

11. (14) Kansas City Chiefs, 9-5: One more win gives the Chiefs their first double-digit win season since 2005 when Trent Green was the quarterback. Jamaal Charles is third in the league with 1,303 rushing yards.

12. (10) Green Bay Packers, 8-6: Matt Flynn did pretty well against the Patriots, however, his inexperience lost him the game. Aaron Rodgers has already been cleared to play against the Giants on Sunday, so the Packers still have life.

13. (15) Indianapolis Colts, 8-6: Two straight divisional wins has given the Colts the edge over the divisional tie with the Jaguars. However, with Austin Collie landing on the IR, Peyton Manning has lost another weapon in trying to keep Indy’s playoff spot in hand.

14. (11) Jacksonville Jaguars, 8-6: Maurice Jones-Drew’s streak of six straight 100-yard rushing games was snapped by the Colts. He’ll have a chance to start a new streak against Washington this weekend.

15. (13) Tampa Bay Buccaneers, 8-6: The overtime loss to the Lions at home may have decimated the Bucs playoff hopes, since the Packers hold the Wild Card tiebreaker. Then again, any team that allows Detroit to win a road game has no business being in the playoffs. If Tampa Bay can’t beat Seattle this weekend, its quest for a first playoff spot in three years is over.

16. (17) Oakland Raiders, 7-7: Darren McFadden has finally arrived in the NFL this season. He now has rushed for at least 100 yards in half of his 12 games this year. He also eclipsed 1,000 yards Sunday, running his season total to 1,112 yards and seven touchdowns.

17. (16) Miami Dolphins, 7-7: The Dolphins continue to be inconsistent this season; they’ve looked great on the road, but can’t seem to win at home. Ronnie Brown scored his fourth touchdown of the season, but it was his first since Week Ten.

18. (20) Dallas Cowboys, 5-9: It looks to me like the Cowboys have found a new coach in Jason Garrett. Since he took over, Dallas has gone 4-2 and averaging over 32 points per game.

19. (22) Tennessee Titans, 6-8: The Titans ended their six-game losing streak by beating the Texans while Chris Johnson and Kenny Britt both had over 100 yards. Randy Moss, meanwhile, continues to be a no show in Tennessee.

20. (18) St. Louis Rams, 6-8: Sam Bradford still has a chance to the worst team in the NFL in 2009 to a division title this year. The Rams’ last two games are both against division rivals — the 49ers and the Seahawks — so anything can happen.

21. (19) Houston Texans, 5-9: So much for a winning season this year; the Texans continue to struggle, and although Arian Foster still leads the league in rushing yards, he’s coming off his worst game of the season with 11 carries for 15 yards.

22. (21) Cleveland Browns, 5-9: If the Browns couldn’t beat the Bengals and Bills the last two weeks, how are they supposed to beat the Ravens and Steelers in Week 16 and 17? Uh ya…good luck with that, guys.

23. (24) Seattle Seahawks, 6-8: The Seahawks are going to need some more wins if they want to win the NFC West. Matt Hasselbeck will need to play like he did in the 2006 postseason.

24. (26) Minnesota Vikings, 5-9: Brett Favre most likely started the last game of his career on Sunday before getting knocked out while being sacked and slammed into the hard icy turf. See ya, Brett.

25. (23) San Francisco 49ers, 5-9: Just when you think the 49ers found a quarterback, they switch it up and get confused because they don’t have winners. Stranger yet, with a visit to St. Louis coming up this weekend, Sam Francisco still has a chance to host a playoff game if it runs the table and gets some help. Gotta love the NFC West, where it’s never over ’till it’s over.

26. (25) Washington Redskins, 5-9: Rex Grossman started in Dallas this week, and almost beat the Cowboys, throwing for 322 yards and four touchdowns as the Redskins lost again.

27. (28) Buffalo Bills, 4-10: The Bills have won two straight to double their season total, but with their final two games against the Patriots and the Jets, don’t expect more. Then again, you never know with those classic AFC intra-division games where anything can — and does — happen.

28. (29) Detroit Lions, 4-10: A big overtime win in Tampa may have given the Lions confidence to run the table and finish up 6-10 this year, but for now, I’m sure they’re just happy the 26-game road losing streak is final over.

29. (27) Arizona Cardinals, 4-10: If the Cards lose at home on Christmas against Dallas, they’ll finish with a losing record at home this season. Yuck. Back at the beginning of the season, this probably looked like a game that would mean something, didn’t it? Too bad the NFL is stuck with this stinker on the big stage.

30. (31) Cincinnati Bengals, 3-11: Terrell Owens is gone for the rest of the season, although the Bengals ended their ten-game losing streak against the same team that started it — the Browns.

32. (32) Carolina Panthers, 2-12: Both of the Panthers’ wins this season came against NFC West teams, a division I’m pretty sure a group of my buddies might have a chance against. Now they travel to Pittsburgh and then Atlanta, so it doesn’t take a swami to predict a 2-14 record to finish the season.

By Trevor Blake
This entry was posted on Thursday, December 23rd, 2010 at 12:11 pm and is filed under FOOTBALL, NFL Power Rankings, Trevor Blake. You can follow any responses to this entry through the RSS 2.0 feed. You can skip to the end and leave a response. Pinging is currently not allowed.