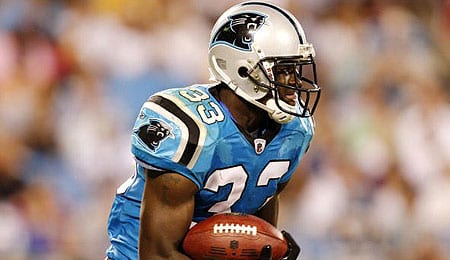 Mike Goodson is proving he belongs on your Fantasy team now that DeAngelo Williams is done for the season.

For the first time this season, the top five teams all maintained their position each of them won over the weekend. Tom Brady’s Patriots continue to lead the pack followed closely by Matt Ryan’s Falcons, each of which have the same record as Mark Sanchez’s Jets.

Matchups of the Week: Green Bay vs. Atlanta, Philadelphia vs. Chicago, San Diego vs. Indianapolis on Sunday Night Football.

Biggest Jump: Two teams jumped five spots each, including the Bears (17th to 12th) and the Cowboys (from 29th to 24th).

1. (1) New England Patriots, 8-2: A close call against the Colts almost cost the Patriots the lead, but a last minute interception saved the day. They play in Detroit on Thanksgiving when I see BenJarvus Green-Ellis prevailing, before they have their second showdown against the Jets to open December.

2. (2) Atlanta Falcons, 8-2: The Falcons put up another dominant performance Sunday, their fourth in a row. Michael Turner put on the burners, but he may not be able repeat it with the Packers coming to town next week.

3. (3) New York Jets, 8-2: The Jets may be tired of close games, but at least they are winning. Three straight game winners to Santonio Holmes puts him as a lock against the Bengals on Thanksgiving.

4. (4) Baltimore Ravens, 7-3: The Raven defense — led by Ed Reed and Ray Lewis — kicked it into gear on Sunday, however they were playing the worst team in the league. Next up they are home for two weeks against the Bucs and the Steelers.

5. (5) Pittsburgh Steelers, 7-3: Mike Wallace continues to impress, with his third straight 100-yard game and four touchdowns over that stretch. With a match up versus Buffalo next week, he should again put up big numbers with Big Ben Roethlisberger at the helm.

6. (6) Philadelphia Eagles, 7-3: Thanks to the Giants’ O-line, Michael Vick had his first turnover of the season on Sunday. The Eagles travel to Chicago for another big NFC battle, which could hand the winner, depending on what Atlanta does, a share of the lead in the NFC. LeSean McCoy is getting big games with Vick spreading out the secondary.

7. (7) Green Bay Packers, 7-3: The Packers, another team riding a hot streak, head to Atlanta look for their fifth straight win. If Aaron Rodgers and Greg Jennings have another game like Sunday, then they have a good chance.

8. (9) New Orleans Saints, 7-3: The Saints are starting to play more like they did last year, and more rest for their injured players helped when they have such a short week. Reggie Bush may come back for their Thanksgiving game against the Cowboys.

9. (8) New York Giants, 6-4: The Giants have lost two in a row and their receivers are dropping like flies; they’ll need a big game against the Jaguars, who have had two late game winners in a row. Steve Smith and Hakeem Nicks are out which leaves Mario Manningham the new top receiver in New York.

10. (10) Indianapolis Colts, 6-4: I thought the Colts had that win against the Pats, but Peyton Manning messed that up. And things don’t get much easier on Sunday night when Peyton has to face another top QB, Philip Rivers.

11. (11) Tampa Bay Buccaneers, 7-3: The Bucs are a big surprise this year, but are also a team that’s taken advantage of their favourable schedule, getting all seven of their wins against sub-.500 teams. Next week will be a test as they travel to Baltimore. If they win this one, I may start to believe they are real playoff contenders.

12. (17) Chicago Bears, 7-3: Matt Forte finally had another big game, but who knows how he’ll do against the Eagles on Sunday. Let’s see how the Bear defense prepares for Vick.

13. (14) Kansas City Chiefs, 6-4: A dominating performance over Arizona helps boost the Chiefs’ confidence for their game in Seattle. Jamaal Charles and Dwayne Bowe can go big in this one.

14. (16) San Diego Chargers, 5-5: If Philip Rivers leads this team to an AFC West title, and far in the playoffs, he’ll be high up on the MVP list this season. Vincent Jackson’s return can make it all possible.

15. (18) Jacksonville Jaguars, 6-4: Maurice Jones-Drew was a beast this week despite his fumble and interception, but he will have more trouble next week in New York against the Giants town. The Jags are rolling now, riding a three-game winning streak, so don’t count them out.

16. (12) Oakland Raiders, 5-5: A poor performance by the Raiders left me confused about their quarterback situation, however, very much entertained when Richard Seymour punched Ben Roethlisberger in the face. That was a nice throwback to old school Raider teams.

17. (13) Tennessee Titans, 5-5: No Vince Young, no Kerry Collins, and an invisible Randy Moss…what else could go wrong for this team? Looks like neither Adrian Peterson nor Chris Johnson will be in the playoffs this year.

18. (21) Washington Redskins, 5-5: The Redskins’ overtime wins have kept them in the playoff hunt as they face Minnesota next week, while Santana Moss continues to have a career year.

19. (15) Miami Dolphins, 4-6: A loss in Oakland can put a damper on the Dolphins’ season after being shut out to drop to 1-4 at home this season. Miami needs to win Sunday, or it can kiss its playoff hopes goodbye.

20. (19) Houston Texans, 4-6: Four losses in a row have put the Texans in a tough spot with an unfavourable schedule for the rest of the season. The team’s defense will need to improve to put the skids on all these late game collapses. Houston is really struggling now, but perhaps a date against a Tennessee team that will have to trot Rusty Smith out for his first NFL start will be just what the doctored ordered.

21. (20) Seattle Seahawks, 5-5: Matt Hasselbeck’s play this year has made the Seahawks more competitive as they lead the NFC West by a close margin. Mike Williams’s foot injury could end his streak of back-to-back 100-yard games.

22. (22) St. Louis Rams, 4-6: With a three-game road trip coming up, two straight losses was not what the Rams needed, but they’ll have a chance to stay in the NFC West race as they face the Broncos next. Unfortunately, Denver has won six straight games at home against NFC opponents, so St. Louis will have a fight on its hands as it desperately tries to find some consistency away from home.

23. (23) Cleveland Browns, 3-7: Colt McCoy can get his third career win on Sunday against the Panthers.

24. (29) Dallas Cowboys, 3-7: A 2-0 record is a good start for Jason Garrett as the interim head coach, but the annual Thanksgiving game against the Saints could easily spell his first loss.

25. (24) Minnesota Vikings, 3-7: After Brad Childress was fired on Monday, the next question is do the Vikings have to guts to bench Brett Favre?

26. (25) San Francisco 49ers, 3-7: Being shut out at home by Tampa Bay may give the 49ers enough fight to beat the Cardinals in Arizona on Monday Night Football. Look for Frank Gore to have a big game against a struggling Cardinal defense.

27. (26) Denver Broncos, 3-7: Monday night’s loss was the fifth defeat in the last six games for the Broncos. One of the main reasons for their struggles is that they are dead last with just 75.4 rushing yards per game. Denver just can’t get on a roll, and you have to go back to last November/December to find its last set of back-to-back wins. Ugh…no wonder the Broncos are in the AFC West basement.

28. (27) Arizona Cardinals, 3-7: Will the big stage of Monday Night Football against the 49ers be enough to inspire Arizona to end its five-game losing streak? Yet despite it awful record, the Cards are still alive because they play in the crappiest division in football. A win in this game could give them a share of second place in the division, pending the Rams’ result.

29. (30) Buffalo Bills, 2-8: Steve Johnson’s breakout game won helped the Bills earn their second win of the season, but they play Pittsburgh next week, which probably means No. 3 won’t be happening before December.

30. (28) Cincinnati Bengals, 2-8: The Bengals led Buffalo 31-14 at the half and gave up 35 unanswered points to lose 49-31. Cincy is now without a win since September, and it doesn’t get any easier on Thanksgiving with a visit to New York to play the Jets.

31. (31) Detroit Lions, 2-8: The Lions’ lack of a running game is leading to loss after loss. And Detroit’s Thanksgiving advantage? Fuggetaboutit. The Lions have lost six straight Turkey day games by an average margin of 23 points, and the closest they’ve gotten over that stretch is an 11-point setback. Someone’s been eating some rancid poultry.

32. (32) Carolina Panthers, 1-9: The Panthers are now looking towards drafting a new QB with the number one pick in the 2011 NFL Draft. Will Stanford’s Andrew Luck change the Panthers’ luck in 2011?

By Trevor Blake
This entry was posted on Wednesday, November 24th, 2010 at 5:53 pm and is filed under FOOTBALL, NFL Power Rankings, Trevor Blake. You can follow any responses to this entry through the RSS 2.0 feed. You can skip to the end and leave a response. Pinging is currently not allowed.