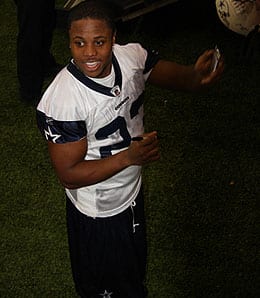 Tashard is going to be a popular Choice on the waiver wire this week.

By RotoRob and Trevor Blake

The battle for AFC supremacy on Monday night turned into a laugher as the Jets were terminated — with extreme prejudice — by the Pats. The Steelers, meanwhile, earned a statement win of their own to creep closer to the top of the standings.

Matchups of the Week: Kansas City vs. San Diego, New England vs. Chicago

Biggest Jump: The Raiders jumped four spots from 20th to 16th after beating the Chargers for the second time this season.

Biggest Drop: The Redskins slid four spots from 21st to 25th after being trampled by the Giants.

1. (1) Atlanta Falcons, 10-2: The Falcons are soaring, having won six straight games after a big come from behind win in Tampa Bay. Michael Jenkins’s first touchdown of the season provided the margin of victory Sunday, but he’s still a marginal Fantasy player for use only in very deep leagues.

3. (5) Pittsburgh Steelers, 9-3: After their big win over the Ravens, the Steelers now control their own destiny in the AFC North. As usual, the defense spurred the offense as Pittsburgh drove for the game-winning touchdown after getting the ball back courtesy of a Troy Polamalu forced fumble.

4. (6) New Orleans Saints, 9-3: The Saints’ rushing game finally showed some life Sunday, gaining 146 yards to help push them past the woeful Bengals for their fifth straight win. Marques Colston was limited to a season-low three receptions, but we’ll forgive him as the last one was the game-winning touchdown catch.

5. (4) Baltimore Ravens, 8-4: After losing to arch rival Pittsburgh, the Ravens are clinging to the top five by the skin of their claws. Dawan Landry was unable to bring down Isaac Redman, who scored the Steelers’ lone touchdown to seal the win.

6. (3) New York Jets, 9-3: The Jets were simply humiliated by Brady and the Pats Monday night, leaving many to wonder just how much of a legitimate contender in the AFC they are. Hey, Rex Ryan: it’s back to the drawing board for you.

7. (8) Green Bay Packers, 8-4: Mike McCarthy’s team bounced back after a tough loss in Week 12, and with a date in Detroit scheduled for this weekend, the Packers could soon be closing in on a playoff berth.

8. (7) Chicago Bears, 9-3: The Bears’ lofty record has many skeptical about how good they really are, and after squeaking out a win over the Lions, there are more reasons to doubt Chicago. Of course, this Sunday — when New England comes to town — we’ll have a very good barometer for where the Bears really stand. And of all people, Brandon Manumaleuna played the hero Sunday, but we sure hope no one is rushing out to pluck him off the wire!

9. (9) Philadelphia Eagles, 8-4: The Eagles had to come from behind to beat the Texans on Thursday but they remained tied atop the NFC East standings. Hell, even Owen Schmitt got into the act with his first TD catch as an Eagle. Owners in 100-team leagues, take note.

10. (10) New York Giants, 8-4: The Giants pounded the ball on the ground en route to a complete humiliation of division rival Washington on Sunday. Brandon Jacobs enjoyed his first 100-yard game of the season, and if he’s been dropped in your league, you can bet he’s being scooped up quickly after this performance.

11. (12) Kansas City Chiefs, 8-4: The Chiefs, who have already beaten the Chargers once this year, have a chance to hammer the final nail in their coffin with another win over San Diego Sunday while all but ensuring themselves of their first division title in seven years. Of course, first Andy Studebaker and the rest of the KC defense will have to shut down San Diego’s high-powered offense — no small task.

12. (15) Jacksonville Jaguars, 7-5: Jacksonville’s win Sunday — combined with a third straight loss by the Colts — has the Jags alone in first in the AFC South. Their superb running attack has gotten nice support efforts from Rashad Jennings the past couple of weeks as he’s scored in two straight games to gain some traction on the waiver wire.

13. (13) Tampa Bay Buccaneers, 7-5: The Bucs looked poised to pull off an upset over the Falcons, but they let the lead slip away late and wound up blowing a ten-point advantage. For the second straight game, fullback Earnest Graham — who has pretty much worked his way out of any Fantasy value — did not earn a single carry, but he did throw a TD pass for Bucs.

14. (11) San Diego Chargers, 6-6: The Chargers’ run of four straight division titles — the longest current streak in the NFL — will surely come to end this year if they don’t step up and beat the Chiefs Sunday. For that to happen, Philip Rivers needs to bounce back after a substandard performance in the loss to Oakland.

15. (14) Indianapolis Colts, 6-6: Peyton Manning and the Colts are struggling right now, but it’s not too late for this team to bounce back and make the playoffs, so a game against the Titans — a team with even bigger struggles — comes at a perfect time. Manning was a little better in the loss to the Cowboys, but he still hasn’t looked like himself the past couple of weeks — back-to-back games with four interceptions? WTF? He only had seven picks all year heading into Week 12, and has surpassed that in the past two weeks alone.

16. (20) Oakland Raiders, 6-6: The Raiders looked like they were done, having lost two straight games, but they somehow managed to walk into San Diego and steal one. Jason Campbell looked pretty good, and if you need help at QB, he’s worth taking a flier on with a game against the Jags and their weak pass defense on tap for this weekend.

18. (15) Miami Dolphins, 6-6: The Dolphins gave their fans plenty to boo about last week, losing at home to the Browns. That was the first time Miami has lost at home to Cleveland since 1970. Yikes!

19. (17) Houston Texans, 5-7: After blowing yet another lead and losing on Thursday to the Eagles, things don’t get any easier for the Texans this week as a Raven squad that will be highly motivated comes to town. At least Andre Johnson continues to scorch, racking up 149 receiving yards against Philly.

20. (22) Seattle Seahawks, 6-6: Pete Carroll’s Seahawks have already crushed the 49ers once this year, and Sunday they’ll get another chance as they look to gain sole possession of first in the miserable NFC West.

21. (24) Cleveland Browns, 5-7: The Browns were losing all the close games at the beginning of the season, but now they’re starting to win them as Mike Adams played the hero Sunday with a huge interception that set up the game-winning field goal against Miami.

22. (19) Tennessee Titans, 5-7: The Titans’ playoff chances are dwindling. Even if they run the table, they’ll still need help from other teams to punch their postseason ticket.

23. (23) Minnesota Vikings, 5-7: The Vikings hammered the Bills on Sunday, but Brett Favre got hammered and knocked out and his ironman streak is in jeopardy. Boo hoo.

24. (26) Dallas Cowboys, 4-8: The Cowboys picked off Peyton Manning four times — returning two of them for TDs — to beat the Colts in OT. David Buehler kicked the game-wining field goal, and he’s starting to look like a decent low-end Fantasy placekicker, so if you need help in that department, give him some consideration.

25. (21) Washington Redskins, 5-7: Things are a mess in Washington as the Redskins have dropped two straight and were forced to suspend defensive tackle Albert Haynesworth for the rest of the season because he was such a headache.

26. (25) San Francisco 49ers, 4-8: San Francisco looks lost without Frank Gore, but it has a chance to derail the Seahawks this weekend.

27. (27) Buffalo Bills, 2-10: The Bills have lost plenty of close ones, but last week wasn’t one of them as they were bitch-slapped by the Vikings. And now they’ll be without centre Geoff Hangartner and right guard Kraig Urbik, both of whom suffered knee injuries.

28. (28) Denver Broncos, 3-9: Denver destroyed KC three weeks ago — one of the few highlights of an awful season — but the Chiefs avenged that Sunday, beating the Broncos 10-6. Hey, at least Knowshon Moreno broke out for a season-high 161 yards to help ease the sting of what’s been a disappointing sophomore campaign.

29. (29) Arizona Cardinals, 3-9: Arizona had won eight straight against the Rams but was completely stifled by St. Louis on Sunday in a 19-6 loss. The Cards bear no resemblance to the team that has won back-to-back division titles, that’s for damned sure.

30. (30) Cincinnati Bengals, 2-10: The Bengals blew a chance to upset the Saints and are now one loss away from tying the franchise record for consecutive losses in one season. Ugh.

31. (31) Detroit Lions, 2-10: If nothing else, the Lions sure know how to rack up losing streaks. On Sunday, they’ll try to avoid an 11th straight loss to Green Bay. Um, good luck with that.

32. (32) Carolina Panthers, 1-11: The Panthers have now dropped six straight as they continue to search in vain for win number two. With top-ranked Atlanta on the docket Sunday, we don’t like their chances.

By Trevor Blake
Tags: NFL
This entry was posted on Wednesday, December 8th, 2010 at 6:01 pm and is filed under FOOTBALL, NFL Power Rankings, RotoRob, Trevor Blake. You can follow any responses to this entry through the RSS 2.0 feed. Both comments and pings are currently closed.