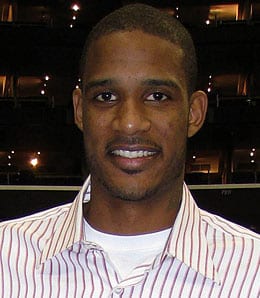 The Hornets would part with the 10th pick if someone also takes Trevor Ariza.

Tuesday night marks Game One of the NBA Finals, featuring the two best players in the game: Kevin Durant vs. LeBron James. Each star is seeking his first ring, so at least one legacy will be launched this season. Any predictions out there? We’d love to hear them.

We’ll be fascinated to see what tactics the Thunder employ to try to keep James under wraps – or at least minimize his impact.

The NBA Draft is just over two weeks away, so the rumours about teams looking to trade up or down are already swirling.

New Orleans, which is sitting pretty with the No. 1 and 10 picks, is reportedly willing to move No. 10 in a package that would include Trevor Ariza or Emeka Okafor. The Hornets really want to clear cap space and the Jazz, desperate to land a point guard and currently without a first rounder, could want in on this action because it would allow it to target North Carolina’s Kendall Marshall.

Marshall is probably the second best PG available in this year’s draft, and he isn’t expected to go in the top 10 picks, but the only higher-ranked point guard – Weber St.’s Damian Lillard – should be long gone before the No. 10 pick rolls around.

Of course, if the Jazz do land Marshall, it will probably need to find a sucker to peddle Devin Harris to. That may not be easy.

Still in the West, this is a huge offseason for the Minnesota Timberwolves, who seem a player or two away from soon becoming contenders. Some of the players the team is rumoured to be interested in this summer are Ian Mahinmi, Courtney Lee and Rudy Fernandez.

Once again, Rudy Gay has been involved in plenty of rumours, this summer drawing interest from Orlando, New Jersey, Toronto and Golden State. However, Memphis denies that he’s on the market.

Another star small forward that is reportedly being shopped is Andre Iguodala. Golden St., as suggested above, is hoping to get an upgrade at the three, so if Gay is not available, Iggy would fit the bill for the Warriors.

Iguodala isn’t the only vet the Sixers may try to divest themselves of this offseason. PF Elton Brand still has one year left on his massive contract, and using the amnesty clause to rid themselves of him isn’t beyond the realm of possibility for the 76ers. If Brand is kept, he’ll be an attractive trade target at the deadline next season because of his expiring contract.

Other big name players that are reportedly available this offseason include Pau Gasol and Kyle Lowry.

The Lakers are a fascinating story this summer because they have to grapple with blowing it up or taking one last kick at the can with an aging Kobe Bryant. Shockingly, some believe that using the amnesty clause on Kobe is the best way to go. Could you imagine that? Like we said, things could get very fascinating indeed in La La Land.

If the Lakers don’t deal Gasol, Andrew Bynum might be shipped out instead, assuming the team wants to begin the rebuild.

As for Lowry, he recently tore coach Kevin McHale a new one and said he doesn’t think he’ll ever be able to coexist with him, so a new home seems likely for the breakout point guard if the Rockets plan to keep McHale.

The Raptors, mentioned above as suitors for Gay, also have interest in both Iguodala and Tyreke Evans, as upgrading at the three is a major priority.

By RotoRob
This entry was posted on Tuesday, June 12th, 2012 at 1:10 pm and is filed under BASKETBALL, NBA Today, RotoRob. You can follow any responses to this entry through the RSS 2.0 feed. Both comments and pings are currently closed.