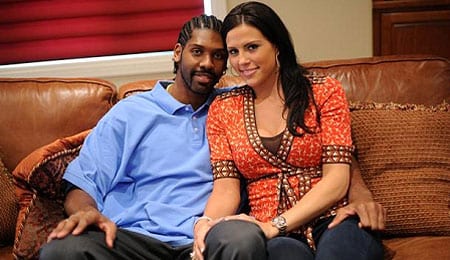 Nene is hurt again, but at least he can go home to his hottie wife.

Helped along by some cold shooting and poor defensive play from the Thunder, an injury-plagued Washington squad pulled off a major shocker Monday night, upsetting Oklahoma City 101-99. Don’t blame Serge Ibaka for this loss… he was on fire for OKC, canning 12-of-17, nailing another three-pointer (what up with that lately?), scoring 26 points and pulling down 11 boards, but “only” recording two blocks.

We slotted Ibaka seventh in our Power Forward Rankings, but he’s been outperforming that, emerging as a top three player at the position. The fiery Ibaka just keeps amping up his Fantasy value, especially now that he’s suddenly showing a touch from downtown. The scoring is up of late (18 PPG over the past five) and he’s even dropping some rare dimes (four over the past three games).

Ibaka’s PT has risen as the season has progressed and if this keeps up, soon everyone will realize this dude is a superstar. We love the fact that he’s nearly matched his free throw attempts from all of last season and we’re only in early January – another sign of growth.

After last year’s injury-plagued effort, Washington centre Nene Hilario is clearly back to his injury-prone ways of earlier in his career. He sat Monday with a knee injury – the seriousness of which is still unclear. And of course, earlier this season, he missed plenty of time with a foot woe, an injury that benefited Trevor Booker.

Shortly after we recommended Booker, he went down with his own knee injury and still hasn’t returned (but at least is getting closer). So this time, it was Emeka Okafor and Kevin Seraphin who each got a bump with Nene out. Meanwhile, if Nene’s current health concern proves more serious than a one-game absence, it may be time to consider cutting him, depending on the size of your league.

We do like the fact that he’s finally starting to get more touches, but the Wizards are going nowhere this season, so Nene isn’t likely to be as big a part of the club down the stretch – whether he’s healthy or not.

The last time we checked in on Brad Miller – nearly two years ago — he was ailing. Surprise, surprise. Well, last summer, after getting waived by the Suns, he called it a day, and we never got a chance to say goodbye to the two-time All-Star. Miller was a very hard worker that played for six teams in his 14-year career. From a Fantasy perspective, he was not the kind of centre that would rack up the boards and blocks for you, but he’d provide nice FG percentages and would occasionally contribute from downtown.

Miller didn’t exactly shine in the playoffs – not that he was ever on a good enough team to go very deep – averaging just 9.5 PPG in 50 contests. Health was always a factor for Miller as just once did he play in every game and only twice made it through more than 73 games in a season. We have to give him kudos as he was recently in the news for his charitable work, teaming up with A Main Hobbies to sponsor the Pay it Forward Charity Race, which donated gifts to children in Torres Shelter in Chico, California. Nice to see an ex-athlete helping make the world a better place.

By RotoRob
This entry was posted on Tuesday, January 8th, 2013 at 1:17 pm and is filed under BASKETBALL, NBA Today, RotoRob. You can follow any responses to this entry through the RSS 2.0 feed. Both comments and pings are currently closed.