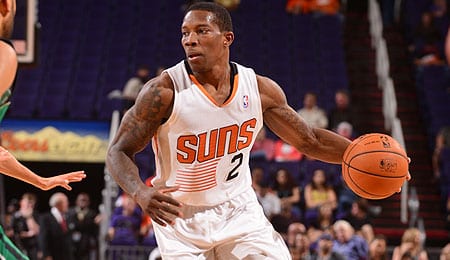 [Editor’s note: We just ran our 2013-14 Sleepers, but as a bonus, we’ve got the RotoRob.com debut article of Bob Raymond, who will be contributing to our NBA coverage this season.]

With the NBA preseason now in the books, let’s look at some players that may be flying “under the radar” with the regular season set to begin on Tuesday.

Bradley Beal, SG, Washington Wizards: There’s a reason RotoRob listed Beal as his top sleeper. The second-year shooting guard from the University of Florida is ready to break out based on his fantastic showing in the preseason. Beal averaged 20.7 points per game, shot nearly 50 per cent from three-point land and chipped in with over one steal per game. The backcourt pairing of John Wall and Beal could lead the Wizards to an Eastern Conference playoff spot for the first time since the 2007-08 season.

Gordon Hayward, SG/SF, Utah Jazz: The pride of Butler University is finally coming into his own, checking in as a top 20 option in our Small Forward Rankings. After leaving the Bulldogs prematurely, it took him a few seasons to truly adapt, but Hayward is ready to lead the Utah offensive attack. He shot 50 per cent from three-point range and averaged nearly five rebounds, five assists and 1.5 steals in the preseason. Hayward’s scoring average of 15.9 led the Jazz and he will be expected to carry the load after the departure of both Al Jefferson and Paul Millsap in the offseason. Just keep Hayward away from Delonte West (see video below).

Eric Bledsoe, PG/SG, Phoenix Suns: The player that several teams coveted at last season’s trade deadline gets a fresh start with the Phoenix Suns after serving an apprenticeship under Chris Paul in LA. Bledsoe looks to be the future cornerstone of a rebuilding Suns team. He displayed his quickness and raw ability in the preseason, averaging 13 points, four rebounds, six assists and an impressive 2.7 steals. Bledsoe is capable of being in the top five in steals this season. It also doesn’t hurt that backcourt mate Goran Dragic is rumoured to be on the trading block, possibly freeing up even more time at the point for this combo guard.

Victor Oladipo, SG, Orlando Magic: There is no doubt in this writer’s mind that Oladipo will be the 2013-14 NBA Rookie of the Year. He will get plenty of playing time at both guard positions and we know it’s only a matter of time before injury-prone PG Jameer Nelson misses multiple games. Like several rookies, Oladipo may struggle with his FG percentage, but will be a strong contributor in the counting categories. That was on display during the preseason as he averaged 13.9 points, 5.6 rebounds, 4.6 assists and 1.6 steals per game.

Spencer Hawes, C, Philadelphia 76ers: Don’t sleep on this big man. While Hawes is not among the elite NBA centres, he will prosper this season on a Sixers team that really lacks depth. With prized rookie Noel Nerlens expected to miss most (if not all) of the season recuperating from a torn ACL, Hawes will be counted on to play big minutes at the five. The intriguing thing about Hawes is his ability to make threes and block shots – a rare combination for a big man. Hawes, Thaddeus Young and Evan Turner are going to have to carry the bread in Philly this season.

James Anderson, SG, Philadelphia 76ers: Speaking of the 76ers, we’re intrigued by the play of Anderson this fall. While he has yet to prove himself at the NBA level in stints with the Spurs and Rockets, he is getting the opportunity of a lifetime this season. With the Sixers being thin in the backcourt, Anderson has made the most of his audition at shooting guard this fall, going 17-for-35 from three-point land while averaging 13.9 points and 1.1 steals. Keep a close eye on him as the season begins as he could be a bargain basement steal for your Fantasy team.

Reggie Jackson, PG, Oklahoma City Thunder: Well, the Thunder is hoping that this Reggie Jackson also becomes Mr. October (and November and December) while the ailing Russell Westbrook recovers from knee surgery. Jackson started to come on in a reserve capacity last season and has only improved in the preseason. He has definitely shown the ability to fill in for the All- Star PG and will likely be the sixth man when Westbrook returns. It doesn’t hurt that former Thunder sixth man Kevin Martin departed for Minnesota this season, creating an opportunity for Jackson, who enjoyed a nice preseason, shooting 48.8 per cent from the field, 92.3 per cent from the line and averaging six assists and one steal. Don’t sleep on this guy, he is only getting better.

Luol Deng, SF, Chicago Bulls: While Derrick Rose and Joakim Noah tend to get all the hype in Chicago, Deng flies under the radar as a valuable Fantasy player. From all reports, Deng is now completely healed from a wrist problem he suffered through last season and he enters 2013-14 as a pending free agent. Those two factors could lead to an explosive season for the ex- Duke star. Deng was brilliant during the preseason, scoring 17.4 points with 6.5 boards and 1.3 steals per game. It didn’t hurt that he shot 50 per cent from behind the three-point line. While several experts are hyping Jimmy Butler as the sleeper in the Windy City, we believe it’s Deng who will have his best season to date.

Andre Drummond, C/PF, Detroit Pistons: Drummond has the skill to be a top five centre in the NBA over the next few years. He has tremendous athletic ability and is ready to take the association by storm in his second season after departing UConn prematurely. Drummond will certainly amass the rebounds and blocked shots together with a strong FG percentage. However, his FT shooting will leave something to be desired and he will have to share the basketball offensively with frontcourt mates Greg Monroe and Josh Smith.

Avery Bradley, PG/SG, Boston Celtics: With Rajon Rondo likely sidelined until December following ACL surgery, Bradley has an opportunity to post solid numbers. Bradley will help your team in several categories with the only negative being FG percentage. When Rondo returns, Bradley is likely to switch from point to shooting guard and still be a worthy contributor.

Now it’s your turn. Let us now in the comments below what you think of Bob’s first effort for the site. Which under the radar players are you targeting?

By Bob Raymond
This entry was posted on Monday, October 28th, 2013 at 8:37 pm and is filed under BASKETBALL, Bob Raymond, Sleepers. You can follow any responses to this entry through the RSS 2.0 feed. Both comments and pings are currently closed.