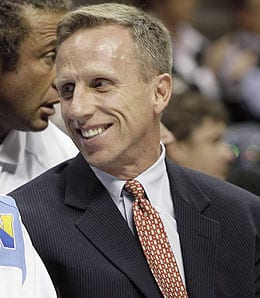 A smile from new Bobcat Coach Mike Dunlap will be rare footage next season.

The Miami Heat has once again carved itself a two games to one lead in the NBA Finals, but will it be able to finish it out, unlike last season?

LeBron James has been on a crazy roll the entire playoffs, averaging almost 31 points and 10 boards through 21 games. Can LBJ finally get over the hump and earn that elusive first ring, the lack of which is the main weapon his culprits wield in their campaign against the King?

What’s your prediction for Game Four Tuesday? Will the Heat hold serve to grab a commanding three games to one lead or will the Thunder steal home court advantage back and square this affair?

By RotoRob
This entry was posted on Tuesday, June 19th, 2012 at 12:00 pm and is filed under BASKETBALL, NBA Today, RotoRob. You can follow any responses to this entry through the RSS 2.0 feed. Both comments and pings are currently closed.