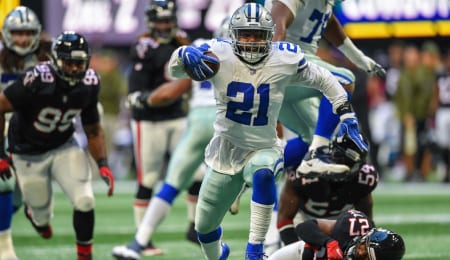 Football is back, baby!

As the preseason arrives, among the biggest factors affecting teams’ 2019 forecasts is holdouts. A litany of superstars, including Dallas’ Zeke Elliott, the Chargers’ Melvin Gordon, Houston’s Jadeveon Clowney and Washington’s Trent Williams, are either holding out or refusing to sign their franchise tag.

So how does that alter those teams’ respective odds? As far as the sites reviewed at Mytopsportsbooks are concerned, three of the four holdouts are inconsequential. The Chargers (+1600), Texans (+3000), and Washington (+10000) all have the same odds now as before the holdouts started. The Cowboys, however, have seen their odds dip from about +2000 to +2500 after Elliott declared that he will not play without a new deal. (Perhaps the only way you’ll be seeing him play this season is in the virtual world — see video below.)

Let’s examine a few other developing stories around training camps, shall we?

Baltimore won its preseason debut with ease, 29-0 over the Jaguars. The Ravens’ lineup isn’t exactly overflowing with Fantasy options on offense, but one name to keep an eye on is tight end Mark Andrews. Once Lamar Jackson took over at QB last year, no Baltimore receiver racked up more yardage than Andrews, so it’s surprising he’s either going undrafted or being left to the last rounds. Andrews has a real shot to be a No. 1 tight end in standard leagues, and possibly finish among the top 10 at his position. This guy was among the top 20 tight ends in receptions last year, but a full year of Jackson should really usher in a breakout.

Chicago is seeking a new placekicker and Elliott Fry seems to have gained the early lead in this position battle. Eddy Pineiro is also in the mix, but right now, give the edge to the rookie Fry. The Bears were among the top scoring offenses in the league last year, so whoever wins this job could have some Fantasy value.

Another fun position battle to watch this preseason will be in Miami, where the starting QB job is up for grabs now that Ryan Tannehill has been dealt to Tennessee. Veteran Ryan Fitzgerald had his moments in Tampa Bay last year, but the turnovers became an issue. Given that the Dolphins really need a QB of the future, don’t sleep on Josh Rosen. He’s a former Top 10 pick and Miami dealt for him, so obviously thinks there’s some upside there. Expect Fitzgerald to win the job (unless he completely flops at training camp), but Rosen could very well usurp him before the season is over.

American rock band Heart has now been churning out the tunes since 1973. In 1978, it released its fourth album, Dog & Butterfly, and from this effort comes the track “High Time.”

Now it’s your turn. Let us know in the comments below which holdout you think will have the biggest impact.

By RotoRob
Tags: fantasy football
This entry was posted on Sunday, August 11th, 2019 at 9:30 pm and is filed under Fantasy Notes, FOOTBALL, RotoRob. You can follow any responses to this entry through the RSS 2.0 feed. Both comments and pings are currently closed.