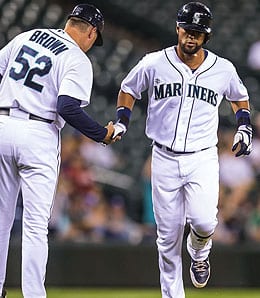 Just over a month ago, we recommended Franklin Gutierrez based on his ridiculously high HR/FB rates. After all, he did spank five dingers in just 44 at-bats in May and another four in 58 at-bats in June.

Considering Gutierrez is hitless over the last 10 days, there’s no reason to keep him even on an extremely deep AL-only league team anymore — at least until he gets on one of his patented hot streaks. On defense, he’s not enjoying as good a season, but every now and then will come up with a gem (see video below).

Interesting side note: according to Baseball-Reference.com, at the age of 31, Gutierrez was most similar to Cy Williams, a Phillies slugger who hit more homers in the 1920s than anyone other than Babe Ruth and Rogers Hornsby.

Yes, you get the sense that Gutierrez has never quite delivered on his promise.

Some items that caught our eye around the diamond on Thursday…

Miguel Cabrera became the 11th player to record 1,000 RBI as a Tiger. With two hits, he snapped a mini slump of two straight hitless games and continued his ridiculously torrid play in August (.356 BA, 1033 OPS). This has helped Miggy raise his BA to .310, which sounds amazing, but is actually 10 points below his career average. Ya, we guess he’s pretty good.

Speaking of studs that are blazing now, how about Kris Bryant? All he did on Thursday was tie his career high with five hits, including two homers. Bryant has reached 30 blasts for the first time, becoming just the fifth Cub to do so at the age of 24 of younger. Oh man, what a future this All-Star has.

Another multi-homer man Thursday — and one that’s actually widely available on the wire — was Baltimore SS J.J. Hardy. He’s been hitting very well since the beginning of July and is starting to help out in the counting cats, so give him a look if you need some help at shortstop. We recommended Hardy in mid-May last year when he came off the DL, and while he struggled at the outset, he justified our faith in June before fading for the rest of the season. At this stage, he’s the type of player you get when he’s hot, and right now, he’s hot.

Another aging slugger that’s widely available on your wire is Philadelphia 1B Ryan Howard. He went yard again Thursday for his third jack in four games and fifth in nine games. If this is the end of the line for RyHo in Philly, he’s trying to show the world he still has something to offer another team. Last Saturday, he mashed a 457-foot grand salami and he’s been on an absolute tear since the All-Star break. And better yet, Howard’s name was just cleared of any wrongdoing in the wake of the Al-Jazeera report that alleged he had received shipments of PEDs.

Now it’s your turn. Let us know in the comments below whether you think Franklin Gutierrez will emerge with any Fantasy value again.

By RotoRob
Tags: Franklin Gutierrez, Seattle Mariners
This entry was posted on Friday, August 19th, 2016 at 3:42 pm and is filed under BASEBALL, Fantasy Notes, RotoRob. You can follow any responses to this entry through the RSS 2.0 feed. Both comments and pings are currently closed.