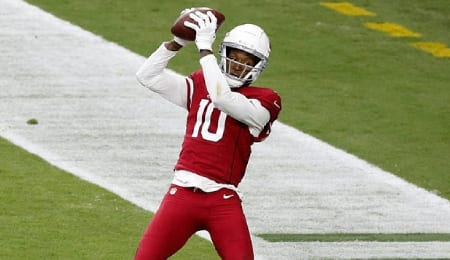 DeAndre Hopkins is the youngest ever to 700 receptions. (AP Photo/Darryl Webb)

Oh man, there’s some sweet-looking games on tap for Week 11. We already witnessed a great battle for NFC West supremacy on Thursday. On Sunday, we’ve got Tennessee and Baltimore in a rematch of last year’s AFC divisional playoff game; Green Bay’s offense vs. Indy’s D; and KC taking on Las Vegas, with the Chiefs seeking to avenge their only loss over the last 15 games. Monday offers another big one with the Rams traveling to Tampa Bay.

Here are eight observations for the week…

1. Who would have thought the Cardinals would be in position to be battling Seattle for the first place in the NFC West in Week 11? Of course, trying to beat the Seahawks on a Thursday has been nearly impossible over the last decade (they’re 10-1 on TNF since 2010), so the fact it was a one possession game is almost a victory in itself. If only the Cards hadn’t killed themselves with all those penalties. Still, Larry Fitzgerald had the rare honour of watching his record broken by a teammate as DeAndre Hopkins pulled in five receptions for 51 yards to become the youngest player in NFL history to reach 700 career catches. Our 26th ranked player heading into the season, Hopkins had been right at that level (prior to this game) as he’s been racking up the receptions (on pace to match his career best) and yardage, but the TDs haven’t been there as he’s heading towards his lowest total since 2016. Meanwhile, does this mean you can now get a Fitzgerald jersey for pennies on the dollar (see video below)?

2. Have you noticed that since the Falcons cleaned house by firing their GM and Head Coach, they’ve gone 3-1 under interim Head Coach Raheem Morris? Don’t forget that Atlanta went 6-2 in the second half last year, so don’t sleep on this team. WR Julio Jones was meh against Denver, but he’s rested now coming off bye, so we’re expecting him to be very efficient against a Saints’ team that limits wide receiver target share, but coughs up lots of Fantasy points to the position.

3. The Ravens give up fewer points than any team in the NFL, so don’t expect big scoring games from any Titans this week. Place kicker Stephen Gostkowski is one to avoid at all costs. Clearly not enjoying life away from the Patriots, he’s particularly struggled in recent games, hitting just 3-of-8 FG attempts over the last five games. If Gostkowski doesn’t get his act together, he’ll either be out of a job or Tennessee will be in trouble.

4. Sometimes a bye comes at just the right time as it does now for the Bills, who were on such a run until they suffered a crushing Week 10 loss in Arizona with two seconds on the clock. Still, how incredible has Buffalo’s receiving corps been this season? Hell, even holdover Isaiah McKenzie has pulled in two touchdowns (and thrown for one), which tops his output from the first three seasons of his career, combined. Crazy!

5. The Panthers got off to a decent start this year (3-2), but after five straight losses they’ve fallen out of the playoff race. With Christian McCaffrey (shoulder) out again this week, it may be time to take a look at Mike Davis. Because Carolina got blown out last week, Davis didn’t get many touches, but he did fairly well (4.6 YPC) against one of the top rush defenses in the league. Against Detroit’s woeful rush D, he could enjoy a very nice performance in Week 11.

6. Another team that’s bye couldn’t come at a better time is Chicago, which has lost four straight, destroying a promising 5-1 start to the season. With Nick Foles (hip pointer) possibly out for Week 12, could Mitchell Trubisky get another crack at the starting QB job? Trubisky actually hasn’t been as bad this year as he was in 2019, but that didn’t stop him from losing the gig to Foles. Before the Bears’ season is a lost cause, they need a solution on offense, and Trubisky may be their best option at the moment. But using him for Fantasy purposes? No thanks.

7. Despite a big win over Tennessee in Week Nine, Cincinnati is going nowhere fast this season, but Week 11 holds some intrigue in that it pits the top overall pick in the 2020 draft, Joe Burrow, against the No. 2 pick, Washington’s Chase Young. Really, these last few games for the Bengals are all about gaining more experience towards 2021, although some wins would be nice. Cincy’s schedule down the stretch is among the best in the NFL, so don’t be afraid to plug in some skill players here, especially RB Giovani Bernard, who should see a much bigger workload this week.

8. The Browns have dropped five straight games against the Eagles, but clearly, these are not your father’s Browns, nor are these your father’s Eagles. What might make this game more interesting is that Cleveland will be without NFL sacks leader Myles Garrett (Covid-19). Yes, Carson Wentz is suffering through his worst season yet, but he did look a little better (not good, but better) against the Giants last week. He’s likely to have a little more time to operate on Sunday against Cleveland, a team only marginally better against the pass than the Giants. Having said that, the Browns D/ST looks like a great bet in this game.

American jazz saxophonist John Coltrane got his start in 1945, remaining active until his death in 1967. In 1958, he released his seminal effort, Blue Train. From this comes the classic “Moment’s Notice,” a song later recorded by the likes of McCoy Tyner, Harry Connick Jr. and Dexter Gordon.

By RotoRob
This entry was posted on Saturday, November 21st, 2020 at 12:46 pm and is filed under Fantasy Notes, FOOTBALL, RotoRob. You can follow any responses to this entry through the RSS 2.0 feed. Both comments and pings are currently closed.